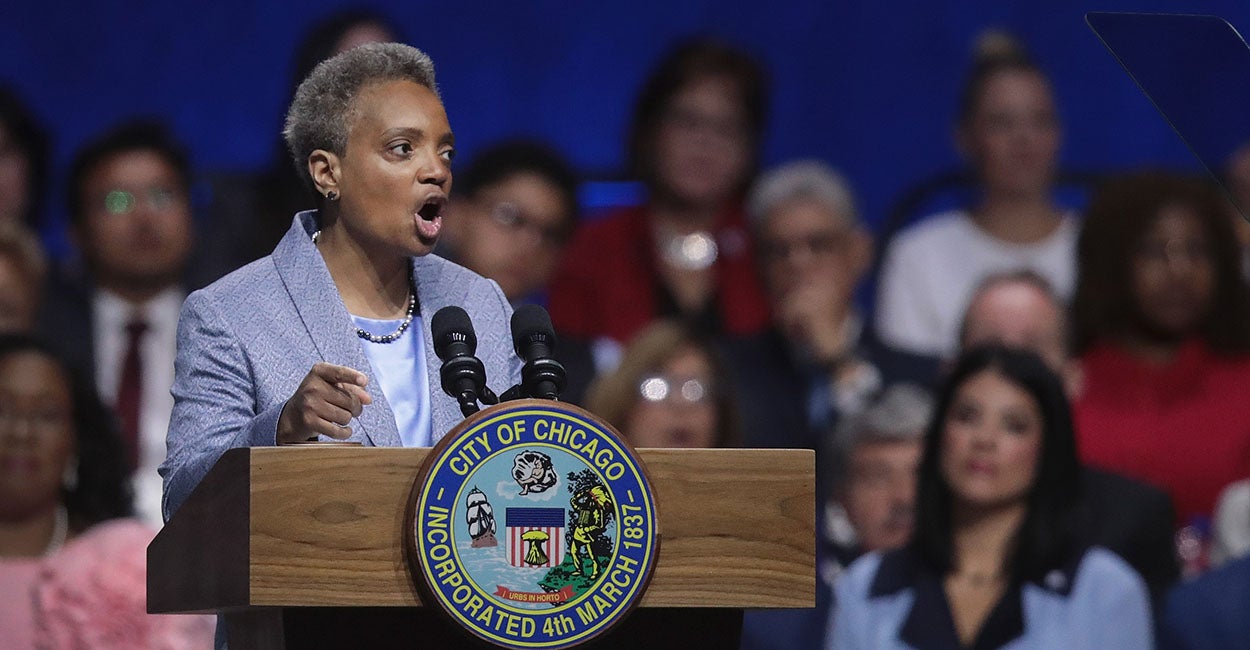 The tragically incompetent mayor of Chicago, Lori Lightfoot, appeared on CNN’s “State of the Union” last weekend to deflect attention from the horror show unfolding in her city by blaming interlopers for its spiking murder rate: “We are being inundated with guns from states that have virtually no gun control, no background checks, no ban on assault weapons—that is hurting cities like Chicago.”

Although these accusations have been leveled by Chicago politicians for decades now, they are a myth.

For one thing, there is no state in the nation with “virtually no gun control” or “no background checks.” Every time anyone in the United States purchases a gun from a federal firearms licensee—a gun store, a gun show, it doesn’t matter—the seller runs a background check on the buyer through the National Instant Criminal Background Check System database.

In some cases, the federal firearm license checks to see if the buyer has passed a background check via a state-issued concealed-carry permit. In states that allow individual private sales, it is illegal to knowingly sell to anyone who you believe is obtaining a firearm for criminal purposes.

Those who cross state lines to buy guns undergo the same background check, and the sale is processed by a federal firearms license in the buyer’s home state. The exact same laws apply to all online sales.

The vast majority of Americans obtain their guns in this manner, and they rarely commit crimes. Around 7% of criminals in prison bought weapons using their real names. Fewer than 1% obtained them at gun shows.

As The Heritage Foundation’s Amy Swearer points out, there have been around 18 million concealed-carry permit holders over the past 15 years, and they have committed 801 firearm-related homicides over that span, or somewhere around 0.7% of all firearm-related murders. Concealed-carry holders not only are more law-abiding than the general population as a group; they are more law-abiding than law enforcement.

On top of all this, federal law requires every federal firearm license holder to report the purchase of two or more handguns by the same person within a week to the Bureau of Alcohol, Tobacco, Firearms and Explosives. This is one of the reasons straw purchasers–people with a clean record who buy for criminals—spread their operations to other states.

This is not unique to Illinois or Chicago. It has nothing to do with strict or lenient laws. It has mostly to do with cities and states failing to prosecute straw purchases.

Lightfoot claims that 60% of the guns used in Chicago murders are bought from out of state. I assume she is relying on 2017’s suspect “gun trace report,” which looked at guns confiscated in criminal acts from 2013 and 2016.

Even if we trusted the city’s data, most guns used in Illinois crimes are bought in-state. If gun laws in Illinois—which earns a grade of “A-” from the pro-gun control Giffords Law Center, tied for second-highest in the country after New Jersey—are more effective than gun laws in Missouri, Wisconsin, or Indiana, why is it that federal firearms license dealers in suburban Cook County are the origin point for a third of the crime guns recovered in Chicago, and home to “seven of the top 10 source dealers”?

The only reason, it seems, criminals take the drive to Indiana is because local gun shops are tapped out. There is a tremendous demand for weapons in Chicago.

Lightfoot may also be surprised to learn that California borders on states with liberal gun laws, such as Arizona, Nevada, and Oregon. Yet no big city in California has quite the murder and criminality of Chicago.

New York borders on states with liberal gun laws, such as Vermont, Pennsylvania, and New Hampshire. Yet, New York City’s murder rate is only a fraction of Chicago’s.

Texas gets an “F” from Giffords Law Center, yet Houston and Dallas have murder rates that are half of that in Chicago. The rates in Austin and El Paso are tiny in comparison.

Then, of course, the “assault weapons bans” that Lightfoot brings up have absolutely no bearing on Chicago’s murder rate, even if such prohibitions actually worked.

There were 864 murders in the state of Illinois in 2018 (the last year for which the FBI has full stats). Of homicides where the type of weapon is reported by law enforcement, 592 were perpetrated using handguns, 14 with rifles, and four with shotguns. Over 100 murders were committed using knives, other cutting instruments, hands, feet, and other types of weapons. And of the 14 “rifles” used, it’s almost surely the case that not all of them were “assault weapons.”

In the states in Illinois’s neighborhood with no bans on “assault weapons,” the number of murders committed with a “rifle” is correspondingly small—10 in Indiana, eight in Tennessee, six in Kentucky, four in Wisconsin, and three in Mississippi.

Nearly 400 people have already been murdered in Chicago this year, around 100 more than in the entire year of 2019. On the night of May 29, 25 people were murdered and another 85 wounded by gunfire, more than any day in 60 years.

And yet, the mayor is appearing on TV to blame Mississippi and Texas. It is far more likely that black-market guns find their way to Chicago because the place has been a poorly-run criminal mecca for decades.