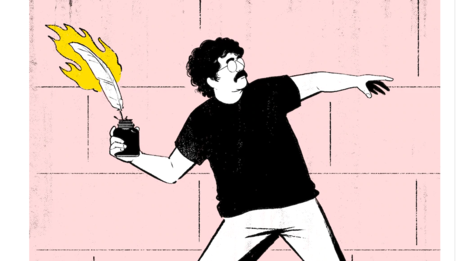 Washington Post Magazine humorist Gene Weingarten offered one of those earnest columns today that’s not about his toilet habits (that was last Sunday). He writes that in the days after a “national tragedy” — in this case the death of George Floyd — readers send in “earnest but mostly inept efforts at literature” and poetry, and after dipping into the mail at the paper, he diplomatically claims “every one of those poems moved me.” (Wink wink.)

“Coughing” does not rhyme with “sobbing,” he noted, and then wrote some apparently comedic poetry of his own about current events, about how “The White House harbors a would-be dictator / He’s half-ignoramus (the other half hater).” This just sounds like bad Dr. Seuss.

Under the guise of protecting the peace.

One victim dies while taking a knee

An irony lost on no one but he

Who has found it convenient to further divide us

To rant and to sputter and not stand beside us.

And so in the midst of this countrywide misery

He just fans the flame on the Devil’s rotisserie.

Then came the part where Weingarten actually stated that mass protests that threaten to spread the coronavirus are “wonderful” and “noble,” when normally the leftists think of red-hatted Trumpers at rallies infecting each other is the best kind of social Darwinism. But when the Left assembles, democracy flowers! Let’s pick up where we left off:

Which leads to mass rallies to show our disgust

Ignoring our safety, to protest the unjust —

We know in our hearts that the plague is still there.

And we say with our presence we no longer care.

We’re out in the thousands, defying the brass.

Defying the truncheons, the bullets, the gas.

Masks have come off, and in our resistance-ing

And wonderful, bracing and noble of heart.

And maybe, just maybe, that’s at the core of this.

Telling the bastards we won’t take any more of this.

One can imagine very easily that by proclaiming the royal “We,” Weingarten is saying he’s been out in the streets protesting. Contributing your political prose at the offices of The Washington Post probably isn’t satisfying enough.

CDC says all adults ‘should’ get a booster shot amid concerns about omicron Covid variant
Boeing, airline stocks tumble as new Covid variant spurs travel curbs
Transgender college swimmer who swam as a man for 3 years now crushing the competition at women’s meets
Chris Silent on Journalistic Malpractice in Helping Bro, Spews Hypocrisy
Mitchell: Progressives Pushed Us Away from Broken Windows Policing and We’re Paying for it