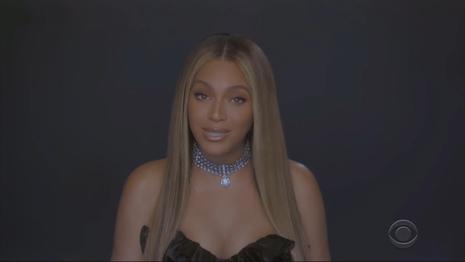 The coronavirus pandemic is doing strange things to awards shows. The shows, including the acceptance speeches, are pre-taped and shown virtually which makes for less spontaneous lectures from our woke betters in the entertainment world.

The BET Awards 2020 aired Sunday, June 28, for the first time simulcast on CBS. The first ten minutes of the program were filled with a new Black Lives Matter version of Public Enemy’s “Fight the Power” filled with images of protest and a monologue by host Amanda Seales, a comedian and actress. Video clips of past shows and winners intertwined with the expression of Seales’ feelings about the current atmosphere of civil unrest and the demands to end racism in America. For example, she said people complain that she always talks about race but she can’t do normal things like eat candy because Skittles make her think of Trayvon Martin or enjoy a good night’s sleep because the police who killed Breonna Taylor have not been arrested. All of that pretty much set the tone of the three-hour program. 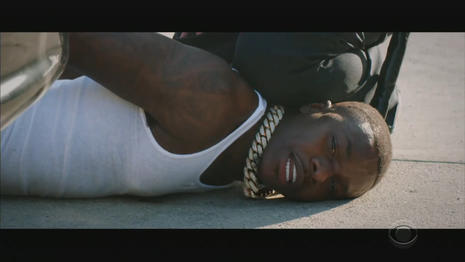 The songs and messages from the artists were in the same fashion. Nicholas Johnson, Princeton’s first black Valedictorian, spoke about the first nine presidents of the school being slave owners. Marsai Martin, the fifteen-year-old actress on the series black-ish, encouraged people to contact the Kentucky D.A.’s office about the police who killed Breonna Taylor. Rappers D Smoke and Sir used back-up singers dressed in police riot gear. Rapper DaBaby began his song “Rockstar” with Roddy Ricch on the pavement with a police officer’s knee on his neck (pictured). And in a song titled “Lockdown,” Anderson Peak and Jay Rock went through the motions of making a Molotov cocktail and tossing it into trash cans to start a fire. 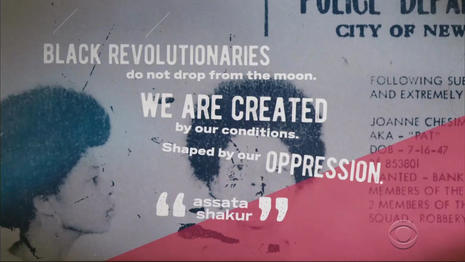 A Black Lives Matter segment that featured famous people saying the names of black people killed over the years, from Emmett Till, Malcolm X and Martin Luther King, Jr. to Michael Brown, Ahmaud Arbery and George Floyd, included an image (pictured) of a quote from cop killer Assata Shakur: “Black Revolutionaries do not drop from the moon. We are created by our conditions. We are shaped by our oppression.” Patrisse Cullors, co-founder of Black Lives Matter, said at the end, “Unfortunately, these names represent only a fraction of the black lives we’ve lost to this 400-year pandemic we call ‘racism.'”

Michelle Obama, who Amanda Seales referred to as “our forever First Lady” presented the Humanitarian of the Year Award to Beyoncé. While Mrs. Obama spoke in non-political terms about how great a person “my girl” Beyoncé is, when Beyoncé accepted the award she did turn political. Beyoncé made sure to remind everyone to remember to get out and vote in primaries, local elections, and the presidential election. “Vote like our life depends on it because it does,” she said.

Beyoncé: Thank you so much for this beautiful honor. I want to dedicate this award to all of my brothers out there, all of my sisters out there inspiring me, marching, and fighting for change. Your voices are being heard, and you are proving to our ancestors at their struggles were not in vain. Now, we have one more thing we need to do to walk in our true power and that is to vote. I’m encouraging you to continue to take action, continue to change and dismantle a racist and unequal system. We have to continue to do this together, continue to fight for each other and lift each other up because there are people banking on us staying at home during local elections in primaries happening in states across the country. We have to vote like our life depends on it because it does. So please continue to be the change you want to see.

Thank you, everyone, who took the time to speak in that beautiful presentation and thank you, BET, for this honor. It means so much to me especially coming from y’all. I love you deep. Good bless you and goodnight.

The host ended the show by reminding the viewers to “donate, protest, vote, and speak.” The message was clear throughout all three hours – the time for racial equality is now and they intend to use the Black Lives Matter organization to pave the way.

Good luck with that. I don’t know how popular Marxism is with the wealthy entertainers, which is the base of the BLM movement. Entertainers thrive on America’s capitalism system.

Bob Dole, the First and the Best Compassionate Conservative
As wildfires get hotter and more common, these start-ups are helping people protect their homes
Republicans’ 2017 tax cuts benefited middle-income and working-class Americans the most, the exact opposite of what Democrats claimed: Analysis
Yes, a Black Kyle Rittenhouse Would Still Be Acquitted
Oh NOW, Brian Stelter Admits Cuomo Violated Media Ethics ‘Many Times’