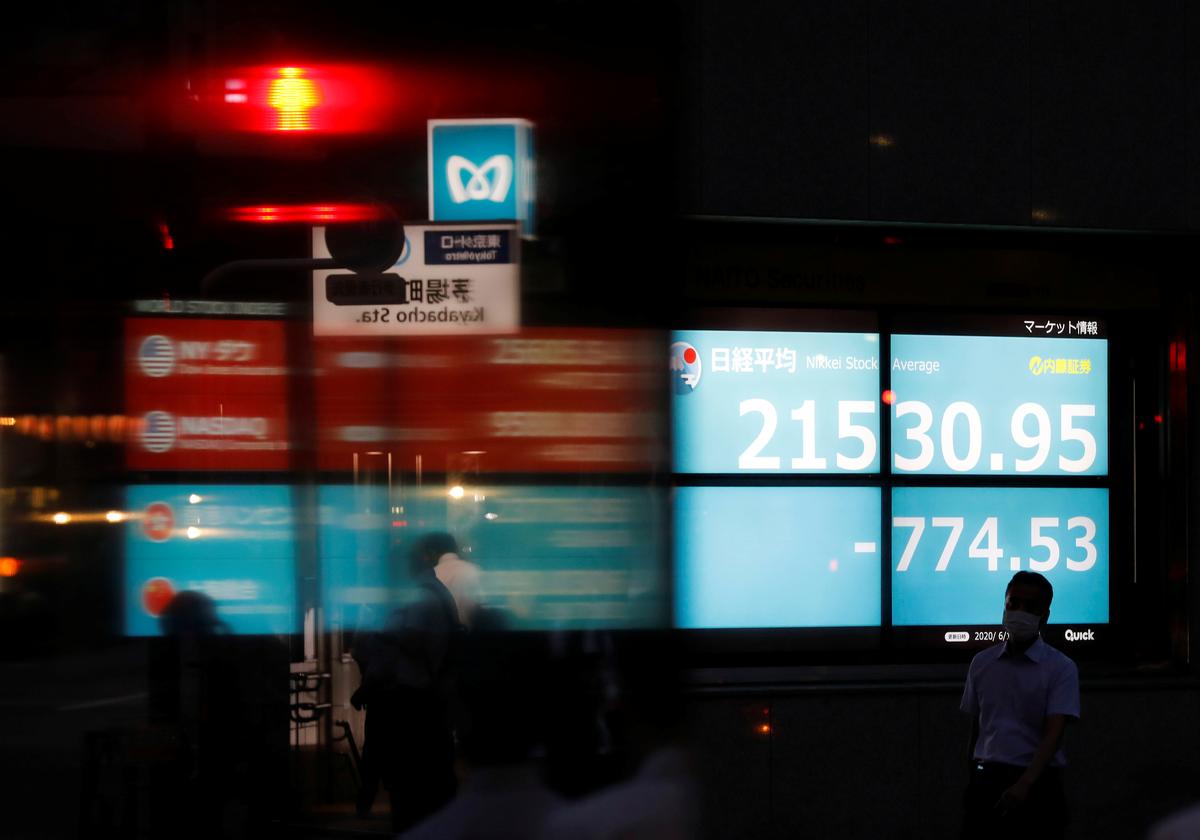 TOKYO/WASHINGTON (Reuters) – Asian stocks and Wall Street futures fell on Thursday as spiking coronavirus cases in some U.S. states and in China dented hopes of a quick global economic comeback from the pandemic.

FILE PHOTO: A man wearing a protective face mask, following the coronavirus disease (COVID-19) outbreak, is silhouetted in front of a stock quotation board outside a brokerage in Tokyo, Japan, June 15, 2020. REUTERS/Kim Kyung-Hoon

S&P 500 mini futures EScv1 fell as much as 1.4% in early Asian trade and last traded down 0.7% while MSCI’s broadest index of Asia-Pacific shares outside Japan .MIAPJ0000PUS shed as much as 1% before paring losses to 0.15%.

On Wall Street, the S&P 500 .SPX lost 0.36% on Wednesday but tech-heavy Nasdaq .IXIC added 0.15% due to hopes of increased demand for various online services due to the epidemic.

The daily count of infections hit a new high in California and Texas, the two most populous states in the country, while Florida, the third largest, also recorded its second-highest daily increase.

Several other U.S. states including Oklahoma, where President Donald Trump plans a campaign rally on Saturday, reported a surge in new infections.

In China, Beijing cancelled scores of flights, shut schools and blocked off some neighbourhoods as it ramped up efforts to contain a coronavirus outbreak that has fanned fears of wider contagion.

“It is a big shock to markets that China, which appears to have successfully quashed the disease, is seeing a second wave. And in the U.S. we see record cases in many states,” said Norihiro Fujito, chief investment strategist at Mitsubishi UFJ Morgan Stanley Securities.

“All this suggests that the more you re-start the economy, the more infections you have. People have thought the economy will quickly recover in July-September after dismal April-June. But that is now becoming uncertain.”

Border tensions between North and South Korea, and between India and China, also helped sour sentiment for risky assets.

Investors rushed to the safety of bonds, with the 10-year U.S. Treasuries yield US10YT=RR falling 2 basis points to 0.710%.

“In the near-term, we have had a lot of risk-off factors including Bolton and geopolitical tensions in Asia,” said Masahiko Loo, portfolio manager at AllianceBernstein in Tokyo.

“But on the other hand, risk assets are supported by ample liquidity from central banks. I don’t see that changing yet and do not expect major sell-off in risk assets.”

In the currency market, the safe-haven yen rose about 0.2% to 106.81 per dollar JPY= while the U.S. dollar also firmed against risk-sensitive currencies.

The euro was on back foot at $1.1250 EUR= ahead of a video conference between EU leaders on Friday, where they are expected to discuss a proposed 750 billion euro aid package to help countries deal with fallout from the coronavirus crisis.

Australia’s unemployment rate jumped to the highest in about two decades in May as nearly a quarter of a million people lost their jobs due to the coronavirus pandemic-driven shutdowns.

How ‘Equality Act’ Would Impose Transgender Ideology on Everyone
​​​In Uncerta​in Times, How To Put Gold And Silver Into A Tax-Advantaged Account
Indiana House Passes Constitutional Carry
Rand Paul TORCHES Biden’s Trans HHS Nominee for Supporting the Chemical Castration of Kids
Biden Admin Wants to Charge Reporters $170 Every Time They Go to a Briefing