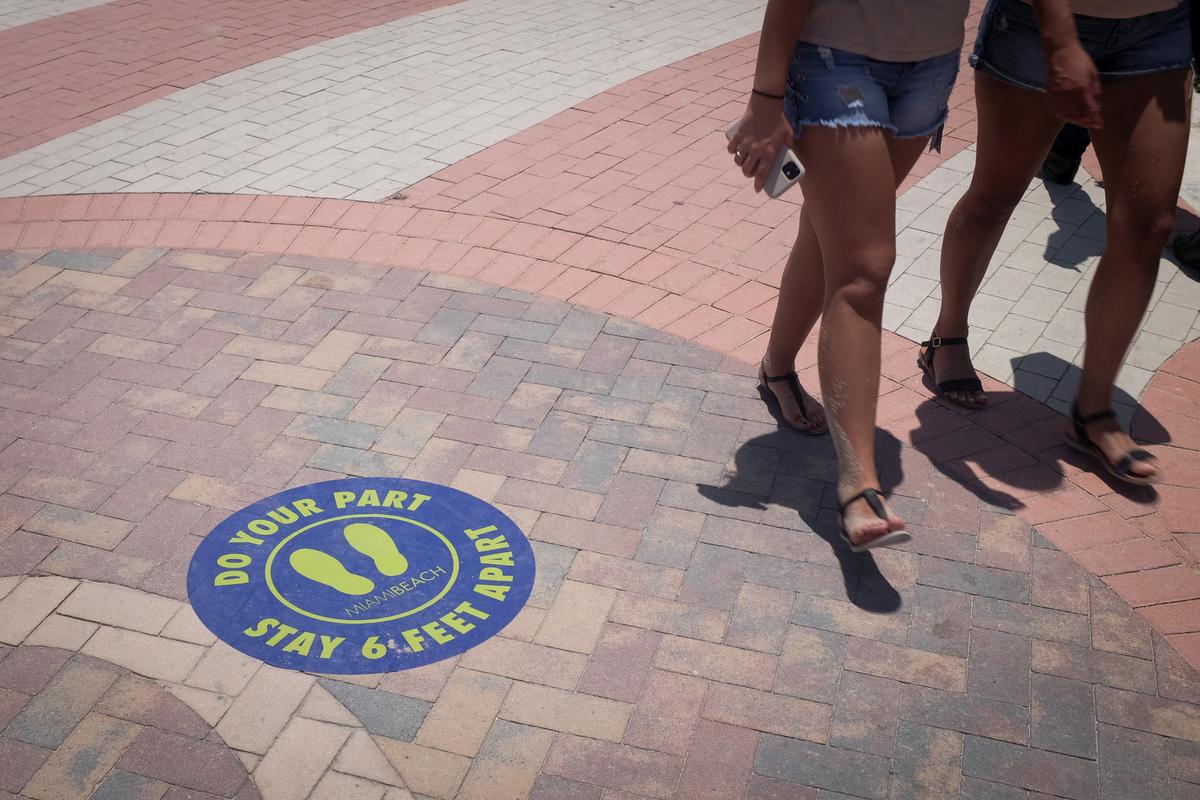 (Reuters) – New coronavirus infections hit record highs in six U.S. states on Tuesday, marking a rising tide of cases for a second consecutive week as most states moved forward with reopening their economies.

FILE PHOTO: Beachgoers walk past a social distancing sign on the floor as beaches are reopened with restrictions to limit the spread of the coronavirus disease (COVID-19), in Miami Beach, Florida, U.S., June 10, 2020. REUTERS/Marco Bello/File Photo

Arizona, Florida, Oklahoma, Oregon and Texas all reported record increases in new cases on Tuesday after recording all-time highs last week. Nevada also reported its highest single-day tally of new cases on Tuesday, up from a previous high on May 23. Hospitalizations are also rising or at record highs.

At Arizona’s Tucson Medical Center on Monday, just a single intensive care unit (ICU) bed designated for COVID-19 patients was available, with the other 19 beds filled, a hospital representative said.

“ICU to be expanded, hopefully, in coming days,” Dr. Steven Oscherwitz, an infectious disease expert at the hospital, said in a tweet on Monday night. “Not sure where people needing ICU care will be able to go, since most AZ (Arizona) hospitals are pretty full now.”

Health officials in many states attribute the spike to businesses reopening and Memorial Day weekend gatherings in late May. Many states are also bracing for a possible increase in cases stemming from tens of thousands of people protesting to end racial injustice and police brutality for the past three weeks.

In Oregon, health officials are trying to contain an outbreak of over 200 new cases in Union County linked to the Lighthouse United Pentecostal Church.

The Oregonian newspaper reported that a video on the church’s Facebook page on May 24 showed hundreds of people standing close together singing. Large gatherings were not permitting under the state’s reopening plan at that time. The video has since been deleted, it said.

Reuters was not able to reach the church for comment.

In Texas, Governor Greg Abbott said the record number of new cases is due to more testing. Hospitalizations – a metric not linked to increased testing – also hit a record high. But the state has nearly 15,000 hospital beds available, Abbott said.

For the week ended June 14, testing increased over 30% but the positive rate held steady at 7%, a Reuters analysis showed.

The top Texas health official, John Hellerstedt, said the increase was manageable but the situation could change.

“The possibility that things could flare up again and produce a resurgence of COVID-19,” which would stress the state’s healthcare system “is still very real,” Hellerstedt said.

Across the United States, 17 states saw new cases rise last week, according to a Reuters analysis.

Pence on Tuesday pushed back against talk of a second wave of infections, citing increased testing.

FILE PHOTO: A man wearing a bandana on his face plays a slot machine at the recently reopened Lucky Star Casino amid the spread of the coronavirus disease (COVID-19), in El Reno, Oklahoma, U.S. May 20, 2020. REUTERS/Nick Oxford/File Photo

“In recent days, the media has taken to sounding the alarm bells over a ‘second wave’ of coronavirus infections. Such panic is overblown,” Pence wrote in a Wall Street Journal opinion piece. “We are winning the fight against the invisible enemy.”

More than 2.1 million people have been infected with the coronavirus in the United States and over 116,000 have died from COVID-19, by far the most in the world.

(Open tmsnrt.rs/2WTOZDR in an external browser for a Reuters interactive)