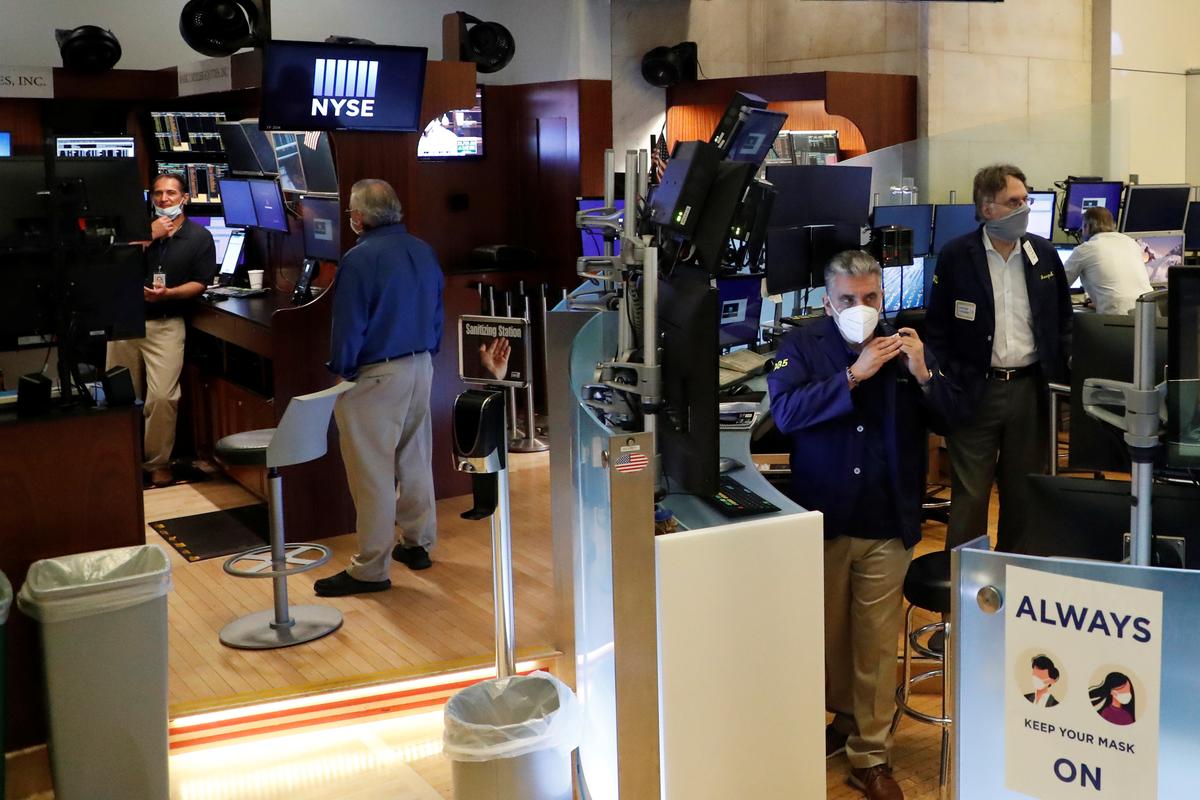 NEW YORK (Reuters) – Global equity markets bounced back on Friday as investors took in stride the U.S. Federal Reserve’s outlook for a long road to recovery and bet shutdowns to fight the coronavirus pandemic were unlikely to be reinstated widely.

FILE PHOTO: Traders wear masks as they work on the floor of the New York Stock Exchange as the outbreak of the coronavirus disease (COVID-19) continues in the Manhattan borough of New York, U.S., May 28, 2020. REUTERS/Lucas Jackson

All three major U.S. stock indexes rebounded from Thursday’s worst single-day drop in three months, regaining a chunk of their losses. In Europe, the STOXX 600 Index snapped a four-day losing streak to add 0.1%.

Still, gold was heading toward its biggest weekly gain since early April as a jump in COVID-19 cases in some U.S. states fed fears that new economic shutdowns might be put in place.

On Thursday, the S&P 500 slumped 5.9%, its steepest one-session loss since March 16, fueled by the Fed’s warning that the U.S. economy would contract by 6.5% this year.

Despite those concerns, Julie Fox, a managing director for private wealth at UBS Financial Services in New York, saw room for equities to move higher.

“The Fed’s comments highlighted the risks that the economic recovery may not be V-shaped, but it also showed that they’re committed to loosening the financial conditions,” she said.

Fox said markets remain in a “volatile environment (due to) uncertainties around the virus (or) just the general growth outlook of how quickly the recovery can happen.”

Despite the rebound, the Dow and S&P 500 were on track to post their worst week in 12 weeks.

Frankfurt’s DAX, Paris’s CAC40 and London’s FTSE were all in positive territory, the latter shrugging off data showing Britain’s economy shrank the most on record in April.

MSCI’s gauge of stocks across the globe gained 0.26%, and MSCI’s broadest index of Asia-Pacific shares outside Japan closed 0.91% lower.

Oil prices were on track for their first weekly fall in seven as new U.S. coronavirus cases spiked.

The three major U.S. stock indexes posted their worst day on Thursday since mid-March, when markets were sent into free-fall by the abrupt economic lockdowns put in place to contain the pandemic.

Cases in New Mexico, Utah and Arizona rose by 40% over the week ended Sunday, a Reuters tally showed. Florida and Arkansas are other hot spots.

In China’s onshore market, the yuan fell 0.3%, headed for its biggest daily decline since May 27.

Bond prices were buoyed after they rallied following the Fed’s commitment on Wednesday to years of extraordinary support to counter the economic fallout from the pandemic.

Reporting by Elizabeth Dilts Marshall in New York, additional reporting by Tom Arnold and by Thyagaraju Adinarayan in London and Stanley White in Tokyo; editing by Mark Heinrich and Dan Grebler

Minneapolis Voters Will Soon Decide Whether to “Defund the Police”
Without firm school mask mandate deadlines, ‘we can sleepwalk into indefinite masking,’ says Harvard professor
President Joe Biden’s Schedule for Wednesday, October 20, 2021
Meghan McCain Blames Hostile Whoopi & Joy for Her Exit from ‘The View’
‘The UK really is in trouble’: Doctors warn of a dire Covid crisis as officials reject restrictions