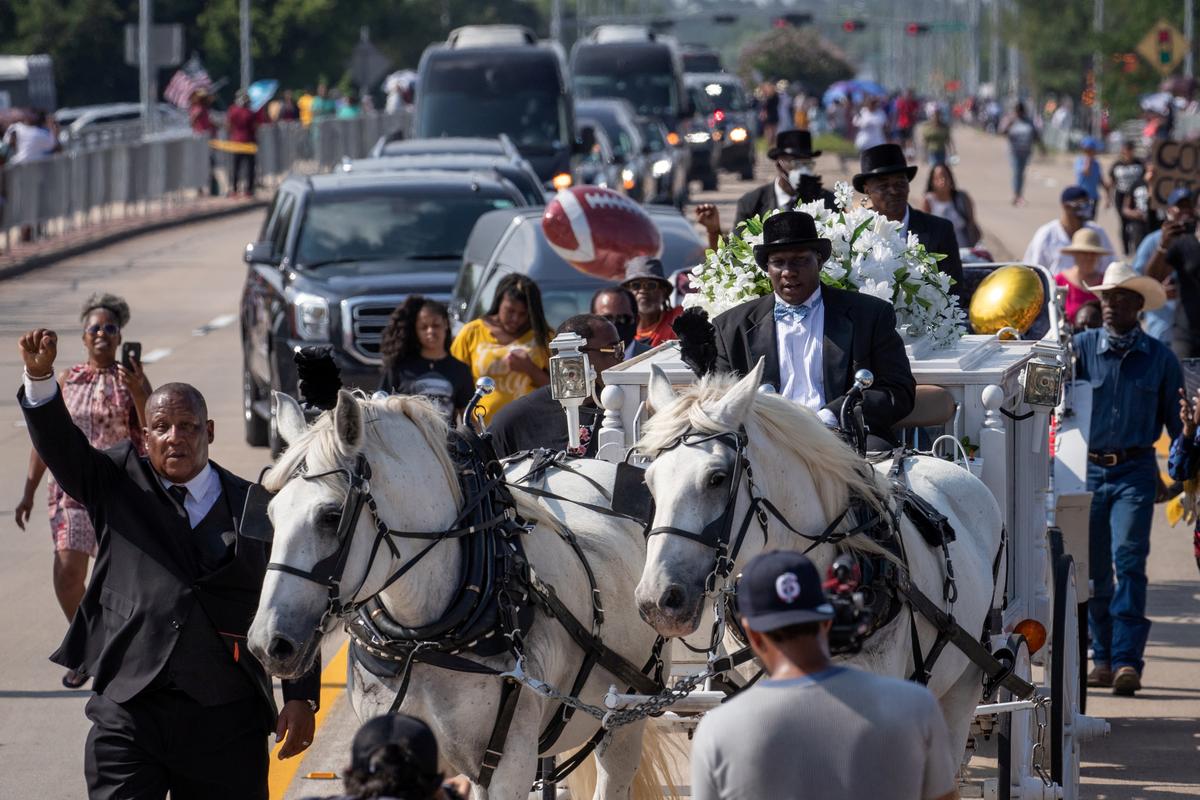 HOUSTON (Reuters) – George Floyd, a black man whose death under the knee of a white police officer roused worldwide protests against racial injustice, was memorialized at his funeral on Tuesday as “an ordinary brother” transformed by fate into the “cornerstone of a movement.”

During a four-hour service broadcast live on every major U.S. television network from a church in Floyd’s boyhood home of Houston, family members, clergy and politicians exhorted Americans to turn grief and outrage at his death into a moment of reckoning for the nation.

The funeral followed two weeks of protests ignited by graphic video footage of Floyd, 46, handcuffed and lying face down on a Minneapolis street while an officer kneels into the back of his neck for nearly nine minutes. The video shows Floyd gasping for air as he cries out, “Mama,” and groans, “Please, I can’t breathe,” before falling silent and still.

The officer, Derek Chauvin, 44, has since been charged with second-degree murder and three other officers with aiding and abetting Floyd’s May 25 death. All were dismissed from the department a day after the incident.

Floyd’s dying words have become a rallying cry for hundreds of thousands of protesters around the globe who have since taken to the streets, undaunted by the coronavirus pandemic, demanding justice for Floyd and an end to mistreatment of minorities by U.S. law enforcement.

“I can breathe. And as long as I’m breathing, justice will be served,” Floyd’s niece Brooklyn Williams declared in a eulogy that drew applause from mourners inside the Fountain of Praise Church. “This is not just a murder but a hate crime.”

Williams was one of several relatives and friends who addressed the service, remembering Floyd as a loving, larger-than-life personality. The memorial was punctuated by gospel music and a video montage of shared memories of the man affectionately known as “Big Floyd.”

His younger brother, Terrence Floyd, spoke about awakening in the middle of the night in recent days traumatized by the memory of seeing his older sibling calling out for their mother as he lay dying.

Civil rights activist the Rev. Al Sharpton called Floyd “an ordinary brother” who grew up in a housing project but left behind a legacy of greatness despite rejections in jobs and sports that prevented him from achieving all that he once aspired to become.

“God took the rejected stone and made him the cornerstone of a movement that is going to change the whole wide world,” Sharpton said, invoking a biblical parable from the New Testament.

Sharpton said the Floyd family would lead a march on Washington being organized for Aug. 28 to mark the 57th anniversary of the 1963 “I Have a Dream” speech given from the steps of the Lincoln Memorial by civil rights leader Martin Luther King Jr., who was assassinated in 1968.

Some 2,500 people attended the funeral, after more than 6,000 people filed past Floyd’s open casket on Monday.

Two columns of uniformed Houston police officers saluted the golden casket as it was wheeled from the hearse into the church before the service. A horse-drawn carriage later bore the coffin on its last mile to the cemetery in Pearland, Texas, where Floyd was buried in a private ceremony.

Former Vice President Joe Biden, the presumptive Democratic presidential candidate in the Nov. 3 election, addressed the funeral service via a video recording, lamenting that “too many black Americans wake up knowing that they could lose their life in the course of just living their life.”

“We must not turn away. We cannot leave this moment thinking we can once again turn away from racism,” he said.

A man raises his hand in solidarity as the coffin of George Floyd, whose death in Minneapolis police custody has sparked nationwide protests against racial inequality, is seen in a horse-drawn carriage as it enters the Houston Memorial Gardens cemetery in Pearland, Texas, U.S., June 9, 2020. REUTERS/Adrees Latif

Two voter registration tables were set up outside the church.

Among those in attendance were loved ones of several other black men killed by white police or white civilians.

The mother of Eric Garner, the New York man who died in a police chokehold in 2014, was present, as was the family of Ahmaud Arbery, a 25-year-old Georgia man who was shot and killed in February while jogging. Three white men were charged in his death.

Fallout from Floyd’s death, and reaction to a spate of arson and looting that accompanied some of the otherwise mostly peaceful protests, also plunged President Donald Trump into one of the biggest crises of his tenure.

Hundreds of protesters packed Seattle’s city hall late Tuesday night, chanting demands for the resignation of the mayor and the defunding the police force.

A Republican, Trump repeatedly threatened to order the military onto the streets to quell protests, focusing on restoring order while saying little about the U.S. racial wounds at the root of the upheavals.

For Before the court: A united front takes aim at qualified immunity: