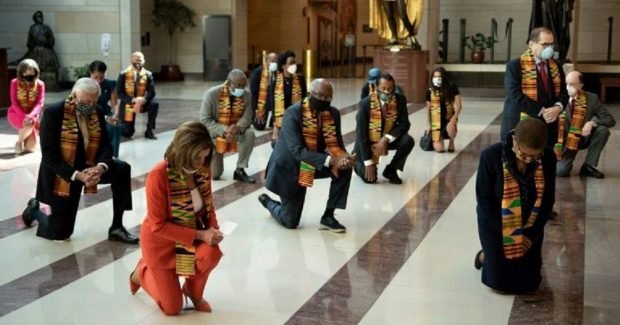 Democratic lawmakers knelt in silent tribute to George Floyd in the US Congress in response to the killing of African Americans by law enforcement. House Speaker Nancy Pelosi and Senate Minority Leader Chuck Schumer were joined by some two dozen lawmakers in Emancipation Hall – named in honor of the slaves who helped erect the US Capitol in the 18th century. They knelt for eight minutes and 46 seconds to mark the length of time a white police officer pinned his knee on the neck of the 46-year-old Floyd, whose May 25 death in Minneapolis unleashed protests and riots against believed racial injustice across America.

Our thoughts turn toward, what does it really mean to take the knee?

Kneeling has a certain meaning within the Christian tradition, and it also means something historically regarding showing fealty or subservience toward one recognized as one’s superior (as to royalty).  Some are pushing back on this saying that the gesture is inappropriate, especially for Christians who bend the knee to no one save God Himself.

Recently, we started hearing about this gesture a lot after Colin Kaepernick did it during the National Anthem. But this was done to mock America, as opposed to standing in allegiance to America for its believed sins. As of late, elites, politicians, and some police officers at protests are “taking a knee” with the protestors – who then often riot to achieve submission to their cause. So who are we supposed to kneel to, and what are their objectives?

For extra credit, and if you have white skin, here are ten more from Chanelle Helm, the co-founder of Black Lives Matter-Louisville, who penned the list of radical demands in Leo Weekly following the rally-turned-fatal riot in Charlottesville, Virginia back in 2017.

Fox’s Tucker Carlson monologue gives a great background on the rise of Black Lives Matters and the insanity that has come to America and the world from these cult-like leaders and followers. It is one video you must see in its entirety if you think anything said in this article is hyperbolic.

Taking a knee for Black Lives Matter is a ritual to express discontentment with the ill-effects of a country they believe founded by white men who created a system that benefits only whites and excludes all others. Obviously, this is ridiculous because there are successful people of all colors in the United States today. In fact, there is a sizeable black middle class that should not exist if those who demand we take a knee are correct, but they are not. It is a gross error in their cultish indoctrination.

It is unfortunate, but make no mistake, Black Lives Matters is trying to create a race war, as they are demanding whites relinquish power based on their race and then extend power to blacks based solely on their race. They are threatening violence if there is no compliance, and that is consistent with a declaration of war. We see the result of non-compliance. Turn on the television. See the smoldering cities all across America? See the murder and mayhem that has occurred, then hear them threaten more of the same if demands are not met.

It’s not just about George Floyd’s tragic death or even believed racial social injustice. They wish to destroy America and the whole Western world to usher in their tyrannical utopia where you must submit – (Marxist Plan to Destroy America). To not kneel would mean you would face the wrath of mob violence where even the police won’t come to save you – defund the police. But you see, it goes even further than this. Kneeling for most religions, is only reserved for God – (Is God an Egalitarian?). So in a sense, Black Live Matters wants you to replace God with them, by force. Is this not what Satan tried to do? Remember this when someone asks you to “bend the knee,” and kneel before any man.