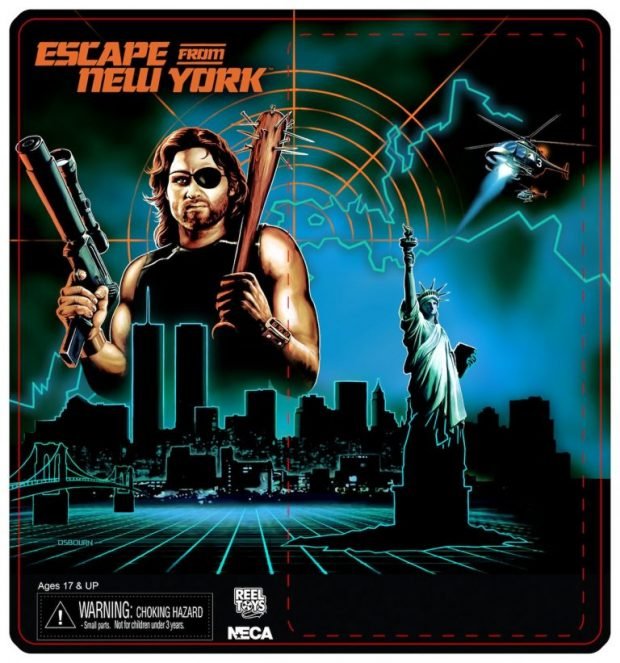 In1 981 Director John Carpenter produced a masterpiece film called Escape From New York which has become a fan favorite including mine and a cult classic. With all the rioting, looting, and thuggery going on today and crime at an all-time high it is reminiscent of John Carpenter’s movie.

For those of you not familiar with the film crime in the country has risen to 400%. Manhattan Island has become the soul prison for the country. A 60-foot high cement wall surrounds the Island with entrances and waterways blocked with armed guards. The U.S. Army has bases all around the outside of the Island. There are no guards inside the prison only prisoners and the worlds they have made. The rules are simple. Once you go in you don’t come out.

When terrorists hijack Air Force One with the president on board (Donald Pleasance) and it crashes in New York, the warden played by Lee Van Cleef sends for Snake Plisken (Kurt Russel)who is a rogue special forces soldier wanted for several crimes. The warden tells him he is to go into New York and rescue the president in return for a complete pardon of all his crimes. To ensure that he carries out this mission Plisken is injected with two tablets that will explode in him and kill him in a certain amount of time if he fails.

There are so many great scenes and lines in this film. When the warden (Lee van Cleef) says to Plisken,  “The president’s plane went down in New York.”

Plisken replies ”President of what?”

“That’s not funny Plisken.” He replies.

Although the film was made in 1981 it portrays the future of 1997. Yet it is more like today in 2020. The film is filled with stores being looted burning buildings and run down areas filed with assorted bizarre criminals much like you see today. Along the way Plisken meets an old buddy of his(Harry Dean Stanton) known as Harold to him on the outside but called Brain on the inside who left him to die once but now helps him escape.

While some parts of New York are being protected, others are in a free for all as rioters break windows in stores like Macey’s and take what they want and tear down boarded windows and break into them with no police around.

Mayor Bill de Blasio imposed a curfew of 11 pm in New York City. How is such a late curfew going to do anything? There has been a significant amount of destruction across all five boroughs of New York City. The curfew is intended to discourage looting and property damage. It’s been happening at night. During the day, the protests are mostly peaceful. By why such a late curfew?

With such a late curfew issued in NYC on June 1, it’s no surprise that DeBlasio completely lost control of the city. It was too late. It didn’t offer any kind of assistance to getting people off of the streets.

Perhaps the mayor has seen the error of his ways. As of June 2, he issued the curfew to be much earlier – 8 PM. It ensures that people are indoors for at least nine hours, keeping the looting to a minimum. The curfew will stay in effect through Sunday, June 7.

Meanwhile, New York City’s Democrat Mayor Bill de Blasio announced Sunday he was giving in to protestors demands to “defund the police” and will be stripping them of funds in the effort to fatten up social services.

The mayor announced during his daily briefing a number of reforms as proposed by a “task force on racial inclusion,” one of which was to shift funding from the police force to youth initiatives.

Today, there are about 36,000 NYPD officers who help keep law and order for about 8.4 million New Yorkers in the largest city in the United States. De Blasio said that the details of the budget shift will be worked out prior to the July 1st deadline.

Meanwhile, Gov. Cuomo hasn’t exactly made it easy to hold everyone to their curfew. He issued a statement to say that he “stands behind” the message of the protesters. However, the violence has taken a turn for the worse in NYC. The level of looting has been troublesome for the city, the state, and the entire nation during the movement. It’s gone from being a way to shed light on the “righteous cause” to a distraction.

DeBlasio didn’t even want to issue a curfew. He didn’t find them to be effective. That might be why he gave such a late one. The curfew violations in New York City carry a Class B misdemeanor, which can be a maximum penalty of three months imprisonment or one-year probation. Is that enough to keep people following curfew? Probably not.

In Dallas, those violating curfews can face up to six months in jail AND a fine of up to $1,000.

The latest movement abound is to defund the police. Sitting congresswomen Rashida Tlaib and AOC are in favor of defunding the police as is Mayor DeBlasio.  The Mayor of Washington D.C., Muriel Bowser had people paint in bright yellow letters on the street  BLACK LIVES MATTER leading up to the white house and renamed the street Black Lives Matte Drive. Doesn’t that come under defacing public property? I guess if you’re the mayor it’s Ok to do that.

President  Trump is naturally appalled at the defund the police movement. These same people are in favor of defunding ICE too that would mean cutting back on many police depts. and disbanding some altogether. America does not believe in that.

And still, the riots continue. We could use a Snake Plisken about now.