In the time of the COVID-19 virus, Twitter apparently sees conservative satire as the true plague.

The parody Twitter persona Titania McGrath,created by comedian and Spiked columnist Andrew Doyle to satirize social justice advocates, is the latest example. Doyle said in a June 3, 2020 Tweet that “she” was “temporarily restricted” by Twitter. The McGrath account was previously suspended for seven days in 2019 after sending a satirical insult to a Twitter user. This McGrath persona identifies as a “radical intersectionalist poet committed to feminism, social justice and armed peaceful protest.”

Twitter has a troubled history with satire accounts. A parody account of former Mayor Michael Bloomberg, @ElBloombito, was briefly suspended on Nov. 22, then reinstated after the platform was pilloried by journalists. 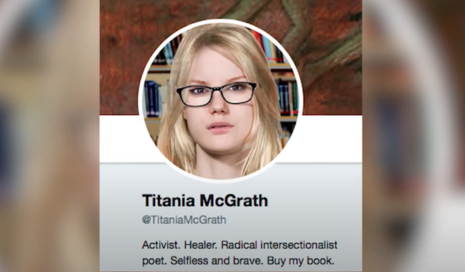 Doyle tweeted that he feared the worst for his famous satire account:

“I assume that “temporarily restricted” is Twitterspeak for “permanently banned”.

When users are suspended, tweets that have not violated Twitter’s terms of service can still be seen, but users cannot make posts themselves.

When reached for comment, Doyle Responded that “No reason has been given, and it is currently not possible to log in.”

He did suggest, however, “My charitable interpretation is that there might be a glitch in the system.”

“However, in addition to the ‘temporary restriction’, Titania lost almost 1000 followers yesterday. Many have since contacted me to say they were automatically unfollowed. This would strongly suggest Twitter is deliberately attempting to limit the reach of the account.”

“Titania has been suspended on numerous occasions in the past for no good reason,” he added. “At this point, it’s difficult to escape the conclusion that Twitter is unhappy with its ideological stances being satirised.”

One prominent example of McGrath’s brand of satire was when the account tweeted:

“Be sure to put your pronouns in your bio.

“That way, when you’re calling your opponents evil lowlife scumbags, trying to get them fired, or gloating if they die, everyone will know that you’re actually incredibly compassionate.”

UPDATE: According to Doyle, the account is back online:

“Titania has been freed! Thanks to everyone who kicked up a fuss.”