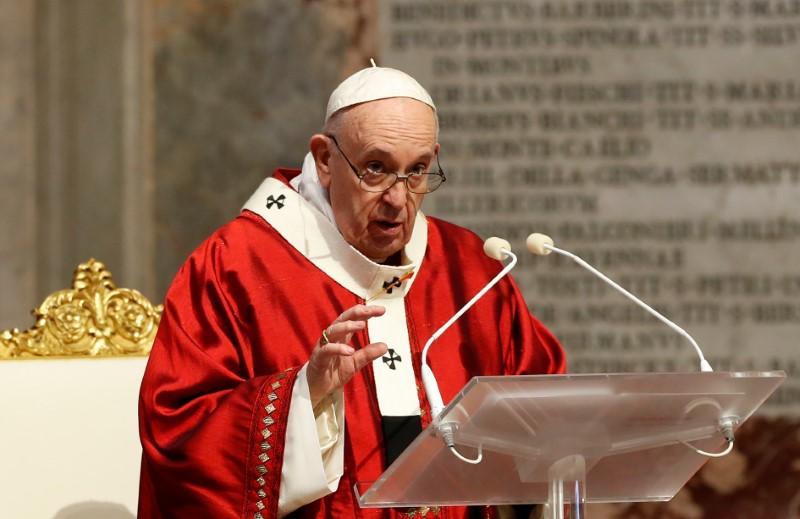 VATICAN CITY (Reuters) – Pope Francis called for national reconciliation in the United States on Wednesday, saying that while racism is intolerable, the street violence that has broken out is “self-destructive and self-defeating”.

FILE PHOTO: Pope Francis leads the Pentecost Mass in the Blessed Sacrament chapel of the St. Peter’s Basilica, amid the spread of the coronavirus disease (COVID-19), at the Vatican, May 31, 2020. REUTERS/Remo Casilli/Pool

Francis broke his silence on the tensions in the United States, which has seen eight nights of protests over the death of a black man in police custody, by dedicating the entire English-language section of his weekly audience to the turmoil there.

He called the death of George Floyd, a 46-year-old African-American who died after a white policeman pinned his neck under a knee for nearly nine minutes, “tragic”.

Francis said he was praying for all who died as a result of the “sin of racism”, including Floyd.

“My friends, we cannot tolerate or turn a blind eye to racism and exclusion in any form and yet claim to defend the sacredness of every human life,” Francis said.

“At the same time, we have to recognise that the violence of recent nights is self-destructive and self-defeating. Nothing is gained by violence and so much is lost,” he said.

Francis asked Americans to implore God for “the national reconciliation and peace for which we yearn”.

U.S. President Donald Trump came under fire from Christian leaders who criticised him for using religious symbols as a backdrop for staged photo opportunities.

They condemned the administration’s forceful displacement of peaceful protesters near the White House on Monday so Trump could be photographed holding a Bible in front of an Episcopalian church.

On Tuesday Catholics protested as Trump rode to a photo opportunity at a shrine dedicated to St. Pope John Paul II.

Washington’s Roman Catholic Archbishop Wilton Gregory said in a statement that John Paul “certainly would not condone the use of tear gas and other deterrents to silence, scatter or intimidate them for a photo opportunity in front of a place of worship and peace”.

Gregory, who is black, criticised the administrators of John Paul shrine, saying he found it “baffling and reprehensible that any Catholic facility would allow itself to be so egregiously misused and manipulated”.

TYPICAL: Alexandria Ocasio-Cortez Supports Defunding Police But Has Her Own Protective Police Detail
After US Pullout From Afghanistan, Joel C. Rosenberg Sees Alliances Shift in Middle East
Biden admin opposes move to give honorable discharge to troops who refuse the COVID-19 vaccine, demands keeping dishonorable discharge on the table
EPIC Gutfeld vs. Tucker Debate: Who’s Dumber? Chris Cuomo or Don Lemon?
Golf’s growth in popularity is much bigger than a pandemic story