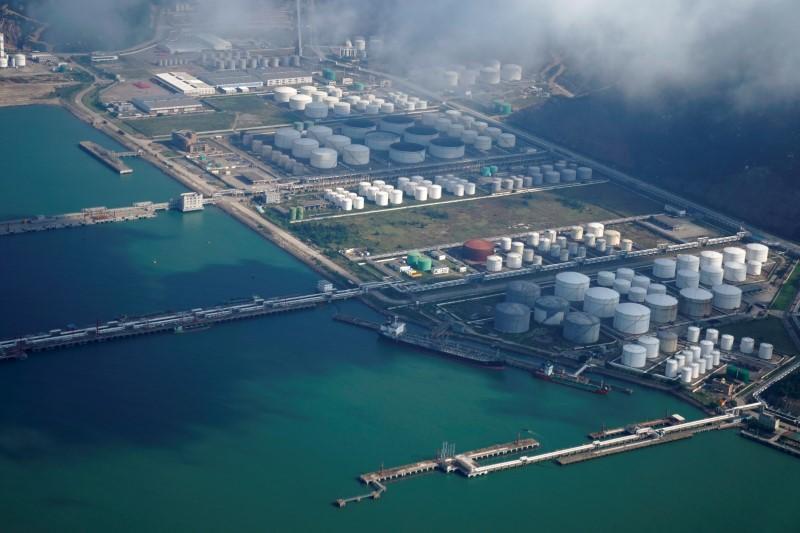 BEIJING/NEW YORK/TOKYO (Reuters) – China’s oil demand has recovered to more than 90% of the levels seen before the coronavirus pandemic struck early this year, a surprisingly robust rebound that could be mirrored elsewhere in the third quarter as more countries emerge from lockdowns.

FILE PHOTO: Oil and gas tanks are seen at an oil warehouse at a port in Zhuhai, China October 22, 2018. REUTERS/Aly Song/File Photo

While China – the world’s second-largest oil consumer – is the outlier for now, easing travel restrictions and stimulus packages aimed at resuscitating economies could accelerate global oil demand in the second half of 2020, industry executives said.

“The brisk resumption of Chinese oil demand, 90% of pre-COVID levels by the end of April and moving higher, is a welcome signpost for the global economy,” said Jim Burkhard, vice president and head of oil markets at IHS Markit.

Widespread lockdowns to contain the spread of the virus took an especially heavy toll on oil markets, wiping roughly 70% off global prices by mid-April and leading to huge build-ups in oil and fuel inventories worldwide.

“When you consider that oil demand in China — the first country impacted by the virus — had fallen by more than 40% in February — the degree to which it is snapping back offers reason for some optimism about economic and demand recovery trends in other markets such as Europe and North America,” said Burkhard.

Benchmark oil prices have also bounced back as lockdown measures eased, with Brent futures rallying 50% and U.S. crude futures over 90% since May 1.

While oil analysts agree that China’s demand is rebounding, estimates differ in terms of degree and duration.

Wood Mackenzie expects China’s oil consumption in the second half to grow 2.3% to 13.6 million barrels per day (bpd) from the same period last year, driven by increased transportation and industrial use.

“By the third quarter, China’s gasoline demand would have surpassed the same period last year by 3% to 3.5 million bpd,” the consultancy said, while diesel consumption could grow by 1.2% to 3.4 million bpd over the same period.

In contrast, the International Energy Agency (IEA) said in its May report that China’s demand will fall 5% on year to 13.2 million bpd in the second half.

Even so, there is strong consensus that both gasoline and diesel use are expected to accelerate as more people and businesses boost movement.

“China has led the demand recovery path so far. Following this, other countries such South Korea, Australia and Vietnam where the (virus) cases are broadly under check will see an improvement in petroleum demand,” FGE analyst Sri Paravaikkarasu said.

JBC Energy analyst Kostantsa Rangelova said Asia’s total refined product demand could rise to 34.3 million bpd in the second half, up from 31.6 million bpd in the first six months, but still about 1.5 million bpd lower from the same period a year ago, mainly because of the decline in jet fuel demand.

In India, the world’s No. 3 oil consumer, state refiners ramped up output in May as fuel sales recovered ahead of the lockdown lifting in June.

In Japan, the fourth largest oil user, gasoline demand is expected to contract by 10% in October to December, but rebound strongly from the 27% contraction seen in April to June, refiner Cosmo Energy Holdings said.

In the United States – the top oil producer and consumer – road fuel demand is expected to rise to 10.6 million bpd in the second half, according to Rystad Energy, 22% higher than the first half.

However, gasoline consumption will still be 5% down from 2019 on higher unemployment, reduced incomes and more people working from home, Rystad analyst Per Magnus Nysveen said.

“Depending on this consumer demand, if more people hit the road, refineries are well-positioned and will rise to meet the increase in demand and that may be a lifeline for them this summer,” he added.

Even so, some U.S. refiners are hesitant to dramatically boost output, remaining cautious on gasoline demand as they eye still-growing distillate inventories.

Cowen research’s refining analyst Jason Gabelman estimates it will take two years for refining margins to rebound as the U.S economy recovers from the effects of the pandemic and subsequent stay-at-home orders.

“For now, we don’t know whether demand for gasoline and jet fuel will ever return to the levels before the pandemic,” JXTG Holdings President Tsutomu Sugimori said at a May 20 briefing, adding that it was difficult to predict how consumers lifestyles would change.

People may prefer to continue working from home and going out as little as possible to avoid being infected, he added.

US to relax travel rules for vaccinated passengers from UK and EU
Panel rejects booster jabs plan for all Americans – with green light given to over 65s and vulnerable
The Gathering Storm (But with Not Enough Wind): Europe’s Energy Mess Gets Worse — a Lesson the U.S. Looks Set to Ignore
Knuckleheads Of The Week: 51% Of Americans Support Vax Mandates
MUST SEE: TGP’s John Burns and Cara Castronuova Talk American Gulag on the Bannon War Room (VIDEO)