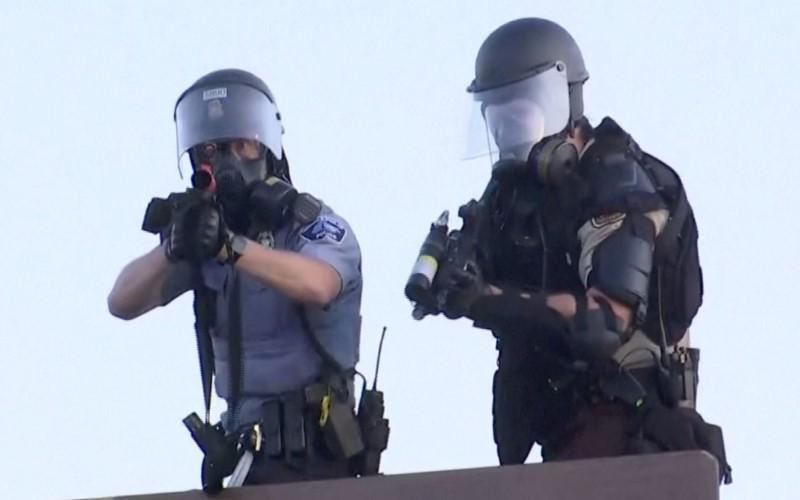 MINNEAPOLIS (Reuters) – Two members of a Reuters TV crew were hit by rubber bullets and injured in Minneapolis on Saturday night when police moved into an area occupied by about 500 protesters in the southwest of the city shortly after the 8 p.m. curfew.

Police aim at a Reuters TV cameraman during nationwide unrest following the death of of George Floyd in Minneapolis police custody, in Minneapolis, Minnesota, May 30, 2020. REUTERS TV/Julio Cesar-Chavez

Footage taken by cameraman Julio-Cesar Chavez showed a police officer aiming directly at him as police fired rubber bullets and tear gas to disperse the crowd.

“A police officer that I’m filming turns around points his rubber-bullet rifle straight at me,” said Chavez.

Minutes later, Chavez and Reuters security advisor Rodney Seward were struck by rubber bullets as they took cover at a nearby gas station.

On footage captured as they ran for safety, several shots are heard ringing out and Seward yells, “I’ve been hit in the face by a rubber bullet.”

Asked about the incident, Minneapolis Police Department spokesman John Elder requested a copy of the video and made no immediate comment.

Seward is seen in later footage being treated by a medic near the scene for a deep gash under his left eye. Both men sustained injuries to their arms, and Chavez was hit in the back of the neck.

The Reuters journalists were clearly identified as members of the news media. Chavez was holding a camera and wearing his press pass around his neck. Seward was wearing a bullet proof vest with a press label attached.

The incident was the latest attack on a journalist covering the protests that have erupted around the United States after the death of George Floyd in Minneapolis.

A black CNN journalist was arrested on camera while covering the protests in Minneapolis on Friday.

A Louisville, Kentucky, television reporter yelled, “I’m getting shot” as she was seen live on camera on Friday being hit by what appeared to be a pepper ball. The Louisville Metro Police Department apologized for that incident.

The Reporters Committee for Freedom of the Press, according to the New York Times, had received about 10 reports involving journalists during the recent protesting, ranging from assaults to menacing.

Nets Refuse to Mention What Biden Was Up to as Hurricane Ian Wreaked Havoc on FL
‘Hard To Find People To Work At Night’: Business Owner Outlines Effects Of Crime Spike
77 killed and many are unaccounted for after one of strongest, costliest hurricanes in US history
SHOCKER: Bill Gates Met With Trump, Pressured Him Not to Investigate Vaccine Safety
Christie’s launches ‘Department X’ as collectible sneakers and street-wear boom