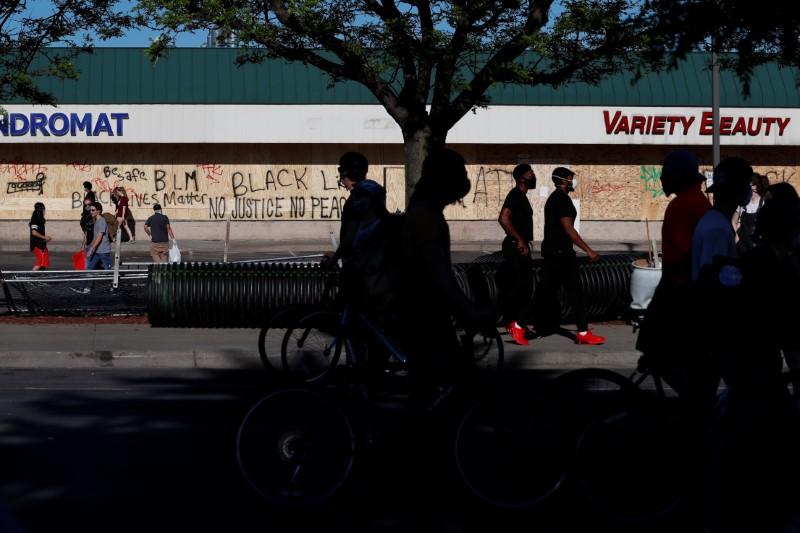 FILE PHOTO: People walk past boarded up stores as demonstrations against the death in Minneapolis police custody of George Floyd continue, in Minneapolis, Minnesota, U.S., May 30, 2020. REUTERS/Lucas Jackson

NEW YORK (Reuters) – Retail giant Target shuttered stores across the U.S. as retailers already reeling from closures due to the coronavirus pandemic shut stores amid protests that included looting in many U.S. cities on Sunday.

Protests turned violent in places including New York and Chicago in the wake of the death in Minneapolis of a black man, George Floyd, seen on video gasping for breath as a white police officer knelt on his neck.

In Los Angeles, protests led to looting of the Alexander McQueen clothing store on Rodeo Drive, and a Gucci store on the vaunted strip was marked with the graffiti slogan “eat the rich,” according to local media reports.

In the nearby Grove Shopping Center, which houses 51 upscale stores, Nordstrom, Ray Ban and Apple were broken into.

The violence was widespread, and Target said it would close or limit hours at more than 200 stores over the weekend. The company told Reuters it was beginning to board up its Lake Street store in Minneapolis, near where Floyd was killed, for safety and to begin recovery efforts. The company said in a public statement that it would plan to reopen the store late this year.

“There is certainly potential for the resulting social unrest to hurt certain businesses like retailers and restaurants, and for it to further dent consumer and business sentiment,” said Robert Phipps, director at Per Stirling. “It is even possible, particularly if the unrest continues and spreads, that it would, all other things being equal, have a significant impact on investor psychology and the markets.”

U.S. retail sales have posted record declines as the novel coronavirus pandemic kept Americans at home, putting the economy on track for its biggest contraction in the second quarter since the Great Depression.

Arizona Audit: Chairwoman Dr. Kelli Ward Corrects The LYING Anderson Cooper (Video)
REPORT: Biden Is Dumping Illegal Immigrants In Cities Around The Country With Little Notice
Woman tells police she was raped at knifepoint — then admits she lied in order to cover up an affair
Feeble Biden Spends Another Weekend at Delaware Basement Amid Calls For Him to Take Cognitive Test
Asia needs to keep Covid under control before the Fed hikes rates, says economist