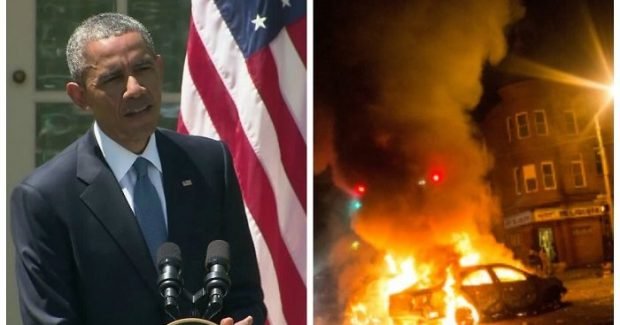 President Obama chose to inject his Marxist “Black Liberation theology” into the current crisis climate after the death of George Floyd in police custody in Minneapolis this last week. He chose to focus on dividing this country by pointing to his perceptions of injustice as if the United States still suffers the systemic racism of the 1800s or 1960s.

My statement on the death of George Floyd: pic.twitter.com/Hg1k9JHT6R

President Trump has also called those choosing to engage in criminal activity and rioting thugs too.

I can’t stand back & watch this happen to a great American City, Minneapolis. A total lack of leadership. Either the very weak Radical Left Mayor, Jacob Frey, get his act together and bring the City under control, or I will send in the National Guard & get the job done right…..

“… These THUGS are dishonoring the memory of George Floyd, and I won’t let that happen. I just spoke to Governor Tim Walz and told him that the Military is with him all the way. Any difficulty, and we will assume control but, when the looting starts, the shooting starts. Thank you!”

Earlier in the day, the President tweeted another tweet that was also censored – “when the looting starts, the shooting starts.” Read Trump’s defense of that tweet. Of course, the media jumped on it as well drawing up history without any context of today’s events.

But in 2015, following the death of Freddie Gray and Baltimore erupted in riots. President Obama came to the podium, sounding very much like President Trump’s tweets today.

Obama was clear – ​”That is not a protest. It is not a statement. It’s people, a handful of people, taking advantage of a situation for their own purposes – and they need to be treated as criminals,” Obama said from the White House. “My understanding is you’ve got some of the same organizers now going back into these communities to try to clean up in the aftermath of a handful of protesters – a handful of criminals and thugs who tore up the place​,” Obama said.

Gallup Poll assessed Americans’ sentiment about race relations as Obama left office and found majority polled race relations got worse. Americans are far less positive today about what Barack Obama’s presidency means for the advancement of blacks in the U.S. than they were shortly after his historic election. Currently, 32% say Obama’s presidency is one of the most important advances for blacks in the past 100 years, down from 71% immediately after he was elected and 58% nine months into his first term.

Why does Obama get to label criminal activity of rioters Thugs and Trump gets accused of racism when he does the same?

Search for victims at collapsed Miami apartment block is officially ended
Paranormal Paramount+ Show Features Amazon-like Corporation as ‘Evil’ Entity
Even THEY Have Had Enough: Reporters Unleash on Psaki Over Return of Masks
Exclusive: Congressional Republicans Seek to Give Biden War Powers For Cuba
Biden’s Gift to Putin