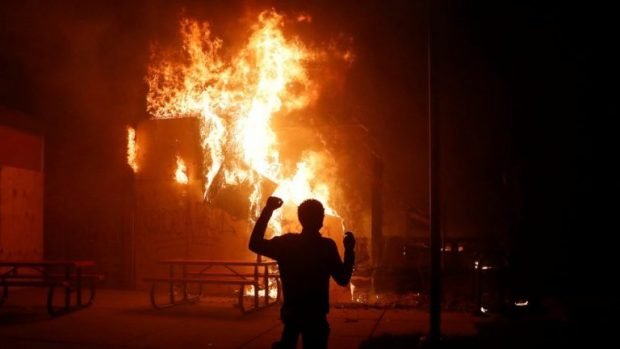 Two people, including a federal security contractor, were killed Friday night during protests over the death of George Floyd, a 46-year-old black man who was killed in police custody earlier this week.

The FBI said it is investigating the fatal shooting of a Federal Protective Services officer outside of the Ronald V. Dellums Federal Building in Oakland on Friday, according to the San Francisco Gate.

An assailant in a vehicle began firing at security officers stationed outside the federal building, according to reports. One officer was injured, and another was killed.

A Detroit man also died Friday after he was shot near protests in that city.

According to Detroit’s WXYZ, the 21-year-old man was shot in his vehicle and later died at a nearby hospital.

The killings highlights the violence that swept across the nation Friday in the wake of Floyd’s death.

Earlier Friday, former Minneapolis police officer Derek Chauvin was arrested and charged with third-degree murder in Floyd’s death. Video footage showed Chauvin kneeling on Floyd’s neck for nearly 10 minutes after he was detained on suspicion of an attempted forgery.

Floyd could be heard pleading for help while Chauvin stayed on top of him. The officer maintained his position for several minutes after Floyd stopped calling for help, the video shows.

Protests in Minneapolis turned to looting on Wednesday and Thursday night. Numerous businesses were set on fire, and stores like Target and AutoZone were looted. Protesters also stormed the 3rd police precinct in Minneapolis on Thursday, and set it on fire.

Protests erupted all across the country on Friday. Some of the hot spots included New York City, Atlanta, and Dallas.

Why The Political Left Wins Every Argument
Man was harassed by bear for a week before being rescued in Alaska
Paranormal Paramount+ Show Features Amazon-like Corporation as ‘Evil’ Entity
Hours before the Tokyo Olympics opening ceremony, the IOC says everything that can be done has been done
Column: Networks Selectively Cover Select Committees