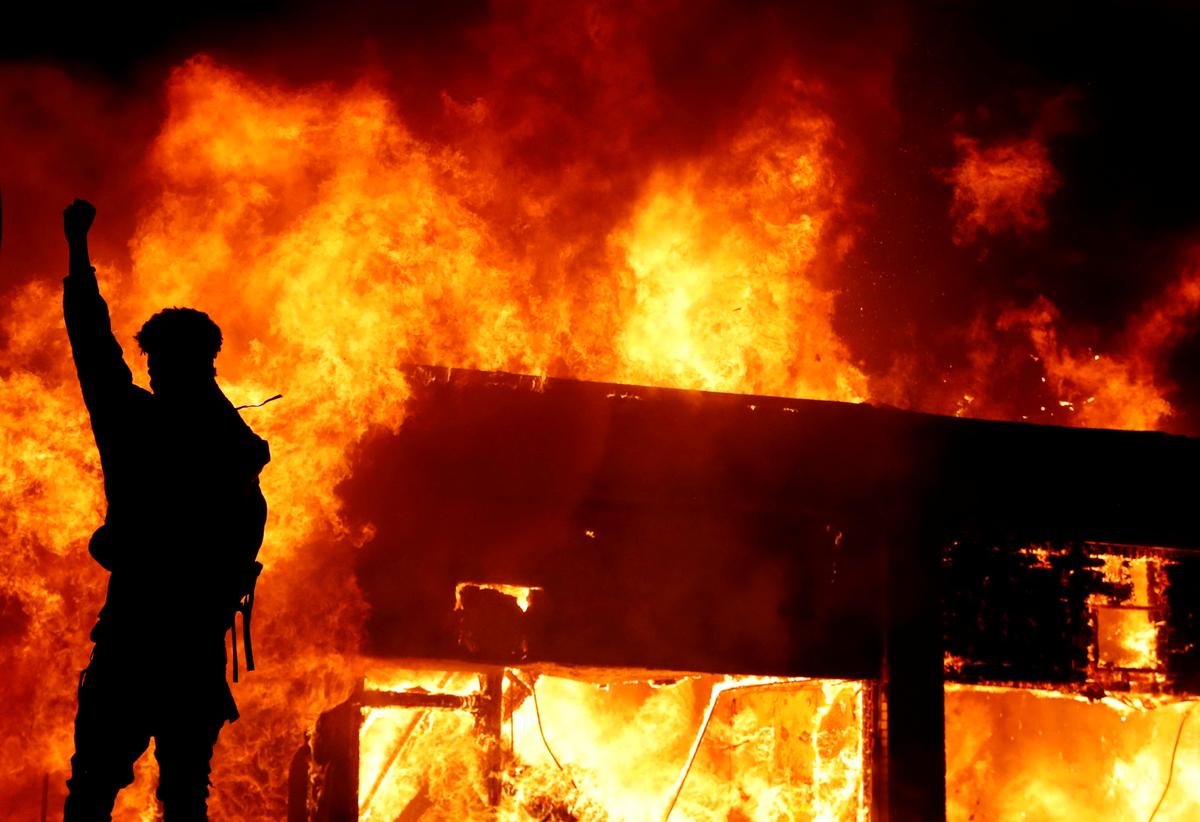 MINNEAPOLIS (Reuters) – The white former Minneapolis police officer shown in video footage using his knee to pin an unarmed black man’s neck to the street was charged with murder on Friday in the man’s death, an incident that has unleashed four nights of violent protests.

Derek Chauvin, who was dismissed from the police department with three fellow officers the day after the fatal encounter, was arrested on third-degree murder and manslaughter charges for his role in Monday’s death of 46-year-old George Floyd.

Graphic video footage taken by an onlooker’s cell phone and widely circulated on the internet shows Floyd – with Chauvin’s knee pressed into his neck – gasping for air and repeatedly groaning, “Please, I can’t breathe,” while a crowd of bystanders shouted at police to let him up.

After several minutes, Floyd gradually grows unresponsive and ceases to move. He was pronounced dead at a local hospital a short time later.

The video reignited an outpouring of rage that civil rights activists said has long simmered in Minneapolis and cities across the country over persistent racial bias in the U.S. criminal justice system.

The charges brought by Hennepin County prosecutors came after a third night of arson, looting and vandalism in which protesters set fire to a police station, and the National Guard was deployed to help restore order in Minnesota’s largest city.

Another group of protesters later converged near the city’s Fifth Precinct station until police arrived and fired tear gas and plastic bullets to break up that gathering. A nearby bank and post office were set on fire.

Still, Friday night’s crowds were far smaller and more widely dispersed than the night before. Law enforcement kept a mostly low profile, a strategy seemingly calculated to reduce the risk of violent confrontations, as was the case in several urban centers across the country where sympathy protests arose.

Among the cities with larger protests on Friday were Los Angeles, Denver, Houston, Atlanta, Detroit and Louisville, Kentucky.

Police and Secret Service agents were out in force around the White House before dozens of protesters gathered across the street in Lafayette Square chanting, “I can’t breathe.”

Hennepin County Attorney Mike Freeman, announcing Chauvin’s arrest earlier in the day, said a key piece of evidence in the case was the video clip showing Floyd lying face down in the street, with Chauvin kneeling on the back of Floyd’s neck.

“We have evidence, we have the citizen’s camera’s video, the horrible, horrific, terrible thing we have all seen over and over again,” Freeman said. “We have the officer’s body-worn camera, we have statements from some witnesses.”

A protester gestures in front of a fire during a demonstration against the death in Minneapolis police custody of African-American man George Floyd, in Minneapolis, Minnesota, U.S., early May 30, 2020. REUTERS/Lucas Jackson

Chauvin had his knee on Floyd’s neck for nearly 9 minutes, according to an autopsy report. Medical examiners found the combined impact of being restrained by police, underlying health conditions and any potential intoxicants in his system likely contributed to his death.

Floyd, a Houston native who had worked security for a nightclub, was arrested for allegedly using counterfeit money at a store to buy cigarettes on Monday evening. An employee who called police described the suspect as possibly drunk, according to an official transcript of the call.

Freeman said the investigation into Chauvin, who faces up to 25 years in prison if convicted, was ongoing and he anticipated also charging the three other officers, identified by the city as Thomas Lane, Tou Thao and J Alexander Kueng.

The prosecutor said it was appropriate to charge “the most dangerous perpetrator” first.

Floyd’s death recalled the 2014 killing of Eric Garner, an unarmed black man in New York City, who died after being put in a police chokehold and telling the officers, “I can’t breathe.”

Mike Griffin, a community organizer in Minneapolis, said the protests reflected years of frustration over economic inequalities and the feeling that black lives were not valued as highly by police.

He said anger has been building since the 2015 fatal shooting by Minneapolis police of 24-year-old Jamar Clark, and the 2016 killing of Philando Castile, a 32-year old black man shot by Minnesota police during a traffic stop.

“George’s murder was just the last straw,” Griffin told Reuters, calling the charges against Chauvin a step in the right direction, but adding there needed to be systemic changes.

The protests were driven in part by the initial lack of arrests in the case.

But Freeman stressed that charges in similar cases typically take nine months to a year, adding, “This is by far the fastest we’ve ever charged a police officer.”

Earlier on Friday, Minnesota Governor Tim Walz said he understood why people had “lost faith” in the police but argued Floyd’s plight had become “lost in 48 hours of anarchy” and called for an end to destruction of property. He has declared a state of emergency and called in the state’s National Guard.