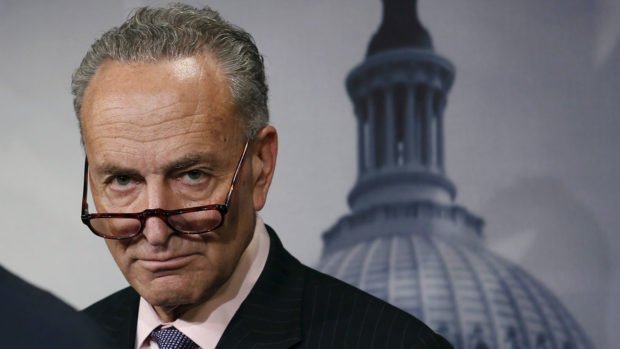 Senate Minority Leader Chuck Schumer on Friday called on Sen. Mitch McConnell to cancel a hearing next week for Rod Rosenstein, the former deputy attorney general who launched the special counsel’s investigation into possible collusion between the Trump campaign and Russia.

Schumer’s request is a far cry from earlier in the Trump administration, when he called for public hearings for Trump associates regarding possible links to the Russian government.

In a letter to his fellow Democrats on Friday, Schumer accused Republicans of holding the Rosenstein hearing in order to “chase wild conspiracy theories” in order to held President Donald Trump’s re-election campaign.

“With our country in crisis, Senate Republicans have become a conspiracy caucus,” Schumer wrote.

“Leader McConnell should instruct these committees to cancel these conspiracy hearings.”

Like many congressional Democrats, Schumer advanced the now-debunked conspiracy theory that the Trump campaign colluded with the Kremlin to influence the 2016 election.

“On guns and on Russian collusion investigation, the silence of my Republican Senate colleagues is deafening,” he tweeted on Feb. 18, 2018.

Since then, the special counsel released a report that found no evidence that any Trump associates conspired with Russia to influence the election.

Rosenstein will testify on June 3 before the Senate Judiciary Committee.

Sen. McConnell hasn’t scheduled any legislative business related to COVID-19 for the next Senate work period

But the Senate GOP Conspiracy Caucus will hold hearings on baseless conspiracy theories to prop up Pres. Trump

They need to focus on this health and economic crisis NOW pic.twitter.com/dtO8CLLWzp

Graham and two other Senate Republicans, Chuck Grassley and Ron Johnson, have ramped up their efforts to investigate the origins of the FBI investigation of the Trump campaign.

The Republicans are focusing on the FBI investigation of Trump campaign associates, the FBI’s abuse of the surveillance process during the investigation, and other government agencies’ intelligence-gathering activities related to the Russia probe.

The Senators are largely building on the findings of Michael Horowitz, the Justice Department inspector general. Horowitz released a report on Dec. 9 that said the FBI made 17 “significant” errors and omissions in applications for Foreign Intelligence Surveillance Act (FISA) orders against Carter Page.

Rosenstein signed one of the four surveillance orders against Carter Page, the former Trump campaign aide.

The Justice Department invalidated that spy warrant after an inspector general’s report found that the FBI made more than a dozen “significant” errors and omissions in the application. The FBI withheld exculpatory information regarding Page, and other information that undercut the credibility of the infamous Steele dossier.

The FBI relied heavily on the dossier to assert that Page was a Russian agent.

Graham said Thursday that he plans to ask Rosenstein if he would have signed the final FISA warrant against Page had he known about the errors uncovered in the IG report.

Ocasio-Cortez Misunderstands Inflation
Iowa racetrack announcer gets crowd applause for rant against anthem protests, and then gets fired from his job.
Why Australia’s Gold Rush Ushered in Political Freedom (as Well as Wealth)
Man was harassed by bear for a week before being rescued in Alaska
America’s Frontline Doctors COVID Lawsuit Part 1: The Big Lie