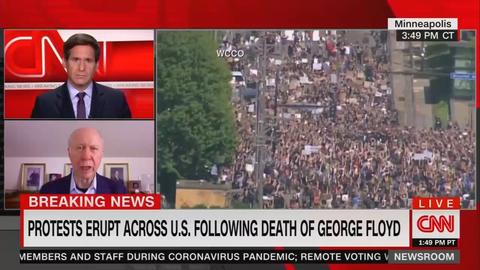 Late Saturday afternoon, during live coverage of the protests and riots in reaction to the police-involved death of Minneapolis resident George Floyd, CNN host John Berman and senior political analyst David Gergen fretted over Attorney General Bill Barr calling for “law and order” in a statement addressing the violence.

Gergen called the choice of words a “dog whistle” and declared it to be “nuts” that it was included in the statement.

A 4:52 p.m. Eastern, a few minutes after Gergen recalled times in American history when protesters have been met with violence from police, which then fomented violence, Berman brought up Barr’s statement and put emphasis on the words “law and order” as he quoted the Attorney General:

We heard from Attorney General William Barr, David, and, specifically, I’m glad you’re with me because he used the phrase “law and order.” It was a very specific choice of words there. And that, of course, harkens back to Richard Nixon himself whom you worked for, although I think the use of that phrase predates your time there. But why do you think Barr is using that? Why do you think that is something the administration is leaning so heavily into?

Picking up on the trope promoted by liberals that speaking in favor of “law and order” is tantamount to expressing a racist sentiment against African Americans, Gergen responded:

It’s a code phrase – it’s more than a dog whistle, you know, it’s a very definite message to the base that “I’m going to be tough on this,” and that’s the position he’s taking. It’s — he’s nuts, and what we need and what the best Presidents have done is to heel and to calm things down, not to sir things up.

Argentina offers ‘x’ gender option for national ID document and passport
Sorry Fauci, I Didn’t Get Vaccinated to Keep Wearing a Mask
Biden’s Economy is Hurting Low and Middle-Income Families the Most
When It Stops Being a Laughing Matter
Senators Take Aim At Section 230 Over COVID-19 ‘Misinformation’