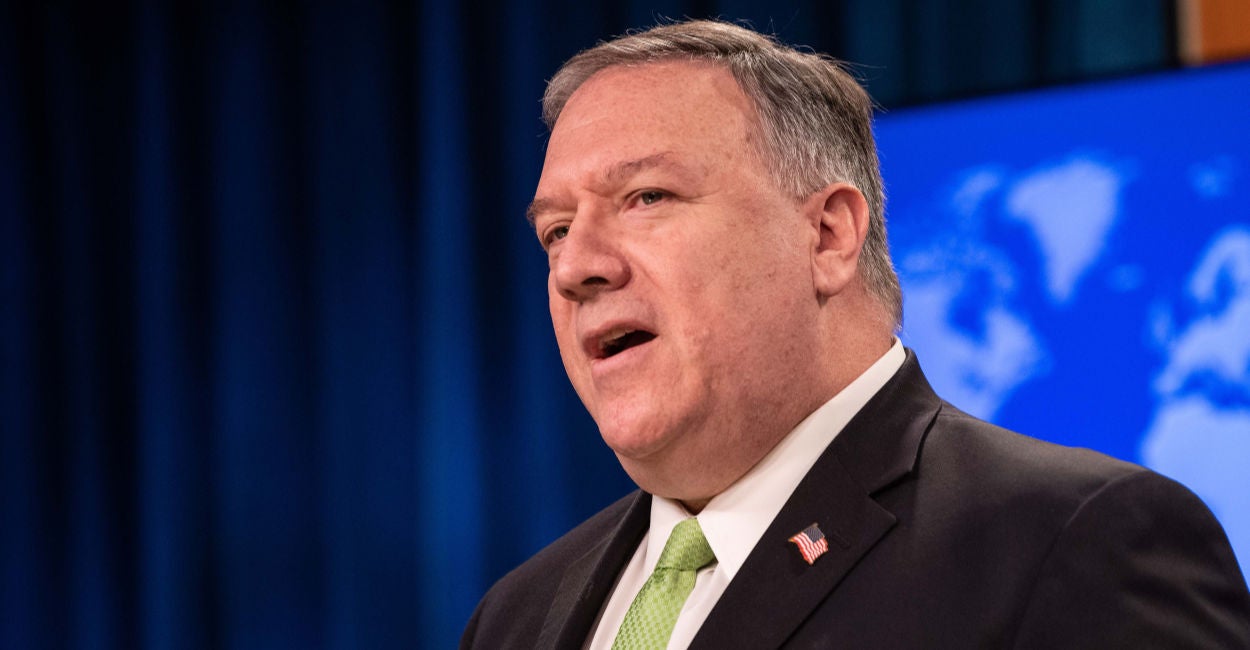 Secretary of State Mike Pompeo has told Congress that Hong Kong is no longer sufficiently autonomous from the People’s Republic of China, which may mean it will no longer receive different legal treatment from the United States.

Pompeo’s statement was simply a reflection of reality. The People’s Republic of China is taking away the territory’s autonomy.

The Chinese Communist Party’s equivocation during the COVID-19 pandemic, and now China’s announcement last week that it is about to pass a national security law that will allow it to rule Hong Kong without the niceties of the rule of law, were the last straw.

In a briefing with members of the foreign policy community, Pompeo fulminated, “This is a pattern and the Chinese Communist Party will have to be held accountable for the things they have done to endanger the security of the American people.”

Pompeo’s initial statement was issued in response to requirements in the 1992 Hong Kong Policy Act and the 2019 Hong Kong Human Rights and Democracy Act. The die was cast when the Act was passed – if Hong Kong is not sufficiently autonomous, it will not retain its special status.

It is not yet clear what it will look like to roll back Hong Kong’s special treatment. President Donald Trump is expected to make a statement further explaining the consequences of decertification which will provide a clearer picture of what this move means for Hong Kong’s future and the future of U.S.-China relations.

But what is clear is that the State Department has crossed some sort of Rubicon with China’s communist leaders.

The Chinese Communist Party and President Xi Jinping did not need to make the former British colony a less free place. A financial center of eight million people without an army, air force, or navy represents no threat to a country of 1.4 billion people with the second largest defense budget in the world.

But it was galling to the Chinese Communist Party and Xi that anybody under its control would have freedoms such as the right to free expression, freedom of conscience, the right to property and the right to gather peacefully. Having to explain daily to the 1.4 billion inside mainland China that Hong Kongers wanted to retain these freedoms only reminded them that they themselves lacked them in the first place.

The idea of freedom was the threat. After years of eroding these freedoms, China’s national security law announcement forced Pompeo’s hand. In a statement Wednesday, he said, in part:

The State Department is required by the Hong Kong Policy Act to assess the autonomy of the territory from China. After careful study of developments over the reporting period, I certified to Congress today that Hong Kong does not continue to warrant treatment under United States laws in the same manner as U.S. laws were applied to Hong Kong before July 1997. No reasonable person can assert today that Hong Kong maintains a high degree of autonomy from China, given facts on the ground.

Pompeo said that China’s “intention to unilaterally and arbitrarily impose national security legislation on Hong Kong” was a “disastrous decision”. It was “only the latest in a series of actions that fundamentally undermine Hong Kong’s autonomy and freedoms and China’s own promises to the Hong Kong people under the Sino-British Joint Declaration, a U.N.-filed international treaty.”

We at The Heritage Foundation know well Hong Kong’s value as an outpost that demonstrated, every day, and for decades, the superiority of the free market system. Its low regulatory environment, rule of law, strong anti-corruption stance, and flat tax rate gave it a GDP per capita of $62,726. Mainland China, lacking all these attributes, clocks in at $15,376.

For all these reasons, Hong Kong sat atop our Index of Economic Freedom since we started it in 1995. It dropped from its position as the world’s freest economy only this year in part because of its increasingly close integration with the mainland.

Hong Kong has always been an anomaly. Britain pried the tiny island away from China in 1842 as booty from the first Opium War, making the barely populated place a permanent colony. Britain then took a 99-year lease on the adjacent Kowloon Peninsula in 1898.

In the next century Hong Kong became a powerhouse, scrambling up the value-added ladder, first making toys and textiles, then computer equipment and eventually high-end banking. Britain did not introduce direct elections for a portion of the Legislative Council until the 1990s, but because Hong Kongers were ruled by a free and democratic colonial power, their liberal freedoms were respected.

With the lease’s end coming up, British Prime Minister Margaret Thatcher saw no choice but to agree to hand the entire territory to China during negotiation with China’s then leader Deng Xiaoping in 1984, but not before Deng gave China’s word that Hong Kong “will enjoy a high degree of autonomy, except in foreign and defense affairs.” That document, the Sino-British Joint Declaration, is an international treaty entered into the United Nations.

China now has broken its word and for breaking it there will be severe diplomatic consequences. Pompeo’s determination will have implications for U.S.-China relations. It will also affect the business community and the global economy.

But there can be no doubt that the Hong Kong people will bear the brunt.

As Pompeo said in his telephone briefing Wednesday: “Any harm that should befall the Hong Kong people is a consequence of the Chinese Communist Party’s actions.”

As such, it is imperative that U.S. policymakers do all that they can to stand with the Hong Kong people and preserve what is left of their liberty and prosperity while simultaneously seeking to hold China accountable for breaking its word.