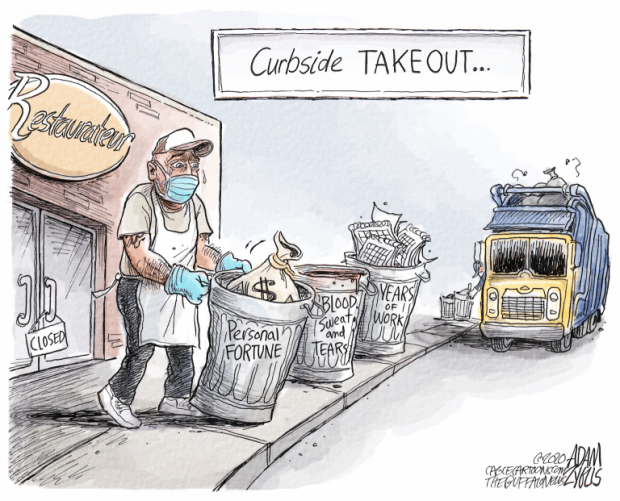 Breitbart has an interesting interview with conservative Alabama Republican Cong. Mo Brooks. Brooks believes China Flu lockdown orders violate the Constitution. “As citizens start to wake up [regarding] the liberty and freedom that they’ve lost, coupled with the recognition that what state has done, or cities have done, are unconstitutional and illegal deprivations of life, liberty and property — that’s when I think you’re going to see the bell go off, …and people starting to figure out …we need to fight for our rights.” 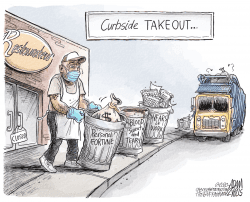 What the protests haven’t had is a single conservative politician willing to risk arrest along with the voters. Politicians run on aggressive slogans like ‘Fighting for You!’ Yet when it comes time to fight, lead or even show up these worthies are suddenly MIA.

Let’s take Lt. Gov. Dan Patrick of Texas. Back in March he appeared on the Tucker Carlson Show and said WuFlu lockdowns are killing the economy. The 70–year–old Patrick said he’s willing to take his chances with the virus, because the economic meltdown is certain.

In May Patrick was offered the perfect opportunity to put his person where his mouth was when Dallas salon owner Shelley Luther opened her business in defiance of lockdown orders. Shelly was there. Customers were there. The media was there. Dan Patrick wasn’t there.

Luther refused to voluntarily re-enter government-imposed bankruptcy and in a Boston Tea Party–like action, tore up a cease–and–desist order from county government. She was arrested and sentenced to seven days in jail. Two hundred miles away Patrick offered to pay her fine and volunteered to serve the sentence in Luther’s place. (A ludicrous offer Patrick knew wouldn’t be entertained.)

How much difference would it have made if Patrick had been there in person with Shelley, letting his actions back up his words? What if Patrick had invited his 84,000 followers to join him at Luther’s business when it was still open?

Instead of a handful of rebellious conservatives complaining in a liberal (for Texas) city, it would have been an anti–lockdown statement with real political clout. The chances of an arrest than would have been vanishingly small because even the Flustapo can count.

A case could be made that Patrick didn’t want to get crosswise in Austin with Gov. Greg Abbott, a fellow Republican. That objection doesn’t apply to the congressional delegation in Washington. Luther’s business Zip Code includes two Republicans, “conservative stalwart” Rep. Van Taylor and Kenny Marchant.

Neither of these ‘conservative’ exemplars said so much as a single word regarding Luther’s arrest defending the constitutional rights they claim to support.

There was a similar situation in Owosso, Michigan when barber Karl Manke opened his shop in defiance of Gov. Gretchen ‘Half’ Whitmer’s erratic and punitive lockdown. She directed the Dept. of Licensing and Regulatory Affairs to jerk Manke’s license in response.

That launched Operation Haircut. Hundreds of Michigan residents converged on the capitol to protest. Barbers set up on the capitol grounds and gave haircuts.

Whitmer ordered the State Police to give their wallets a trim by issuing $500 disorderly conduct tickets.

Shelley Luther made the trip from Dallas to offer support for Manke and the other lockdown resistors. Notable by their absence were Republican Reps. John Moolenaar (Manke’s own congressman!), Jack Bergman, Bill Huizenga, Fred Upton, Tim Walberg, and Paul Mitchell.

Maybe if Operation Haircut had passed the hat and offered to make a campaign contribution, one might have found time to support the rights of the voters that elected them.

In New Jersey, Ian Smith, owner of Atilis Gym in Bellmawr, was also on Tucker Carlson announcing he planned to open up, too. The first day, police issued a disorderly conduct summons to the owner. Later a camera was placed in the parking lot and officers followed patrons’ home to issue citations. Finally, the Camden County Division of Environmental Health posted notices on the gym door ordering it closed.

With the exception of Carlson, no public figure supported Smith, although new Republican convert Cong. Jeff Van Drew, whose district is just south of the gym, sent a two–page letter to the governor. The other GOP Rep. Chris Smith did and said nothing.

And here is the lesson for conservative voters who value the constitutional rights that have been quarantined during the Flu Manchu Pandemic Panic.

The politicians will be pacifists.

Obama’s former doctor predicts Biden will resign ‘in the near future,’ fears the president is a ‘national security issue’
Michigan Gov. Whitmer Is Stripped of Her Emergency Powers
The forgotten story of one of history’s greatest Olympians – and a pioneer of protest in sport
CNN’s Biden Town Hall BOMBS, Loses to Fox News AND EVEN MSNBC?
Gallup poll shows decline in Republicans’ confidence in Big Tech, big business