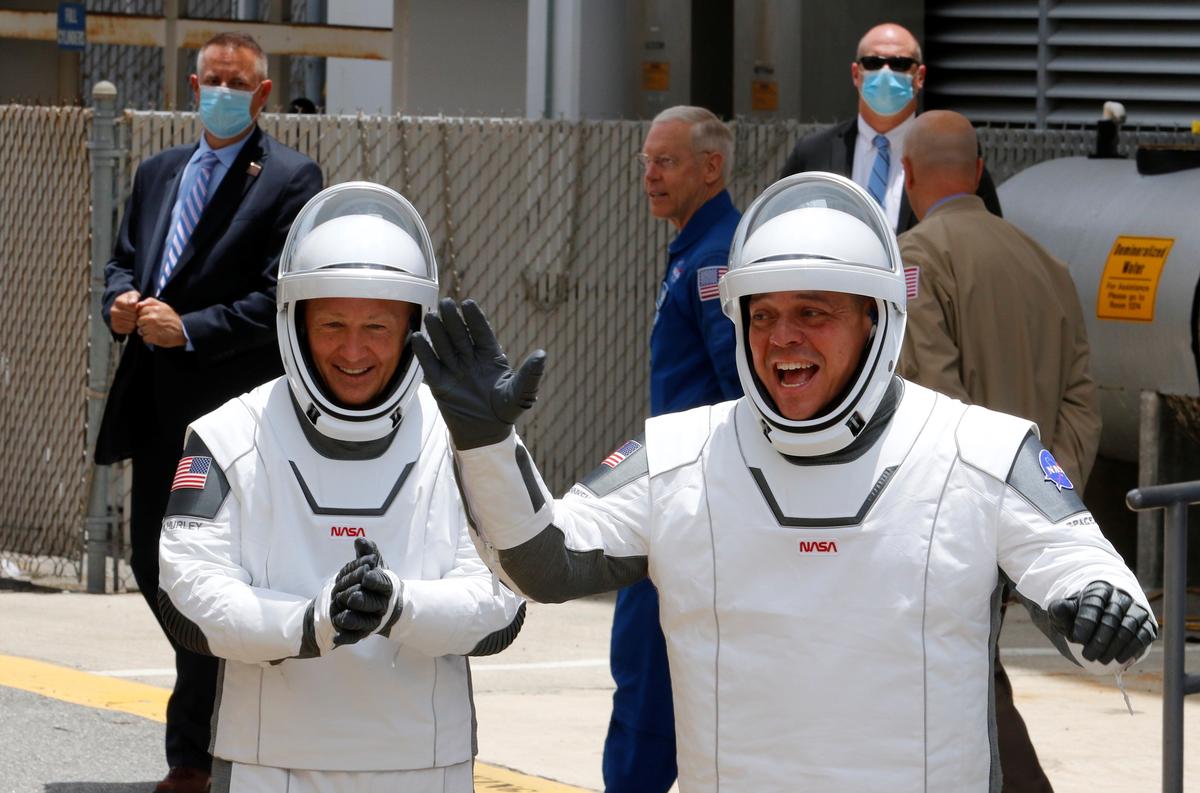 On a day marked by off-and-on rain, a SpaceX Falcon 9 rocket was due to lift off from the Kennedy Space Center at 4:33 p.m. EDT (2033 GMT), launching astronauts Doug Hurley and Bob Behnken on a 19-hour ride aboard the company’s newly designed Crew Dragon capsule to the International Space Station.

“We are go for launch!” NASA Administrator Jim Bridenstine wrote on Twitter, although looming storm clouds off Florida’s coast potentially could force a postponement of the mission until Saturday.

SpaceX and NASA “will continue monitoring liftoff and downrange weather as we step into the countdown,” Bridenstine added.

The two astronauts made a series of preparations for the planned launch. Hurley even posted a picture of his breakfast of steak and eggs before suiting up in SpaceX’s white flight suits at the Kennedy Space Center’s operations and checkout building.

Musk and Bridenstine, wearing protective face masks due to the coronavirus pandemic, were present at the building to join the two astronauts, who did not wear face masks. The astronauts then emerged from the building, waved to family members and onlookers including Vice President Mike Pence and hopped into a Tesla vehicle to drive to the launch pad.

After giving thumbs-up signs at the launch pad, the duo made their way up a 265-foot-tall (80-meters) to the crew access arm, a bridge that leads to the capsule atop the Falcon 9 rocket, and were strapped into their Crew Dragon seats.

Prospects for an on-time liftoff hinged on the weather, with U.S. Air Force forecasters on Wednesday morning citing a 50% chance that thick clouds over eastern Florida could force a postponement. If that happens, the next launch window would be on Saturday afternoon.

The astronauts are scheduled to blast off from the same launch pad used in 2011 by NASA’s final space shuttle flight, piloted by Hurley. President Donald Trump was scheduled to visit Florida’s Cape Canaveral to view the launch.

A successful mission would achieve NASA’s top priority, as articulated by Bridenstine, of resuming launches of “American astronauts on American rockets from American soil.” Over the past nine years, NASA astronauts have had to hitch rides into orbit aboard Russia’s Soyuz spacecraft.

For Musk, Wednesday’s launch represents another milestone for the reusable rockets his company pioneered to make spaceflight less costly and frequent. It would also mark the first time that commercially developed space vehicles – owned and operated by a private entity rather than the U.S. space agency – have carried Americans into orbit.

The last time NASA launched astronauts into space aboard a brand new vehicle was four decades ago at the start of the shuttle program.

Hawthorne, California-based SpaceX, founded by Musk in 2002 and formerly known as Space Exploration Technologies, has never previously flown humans into orbit, only cargo.

Reporting by Joey Roulette in Cape Canaveral, Fla.; Writing by Steve Gorman; Editing by Will Dunham