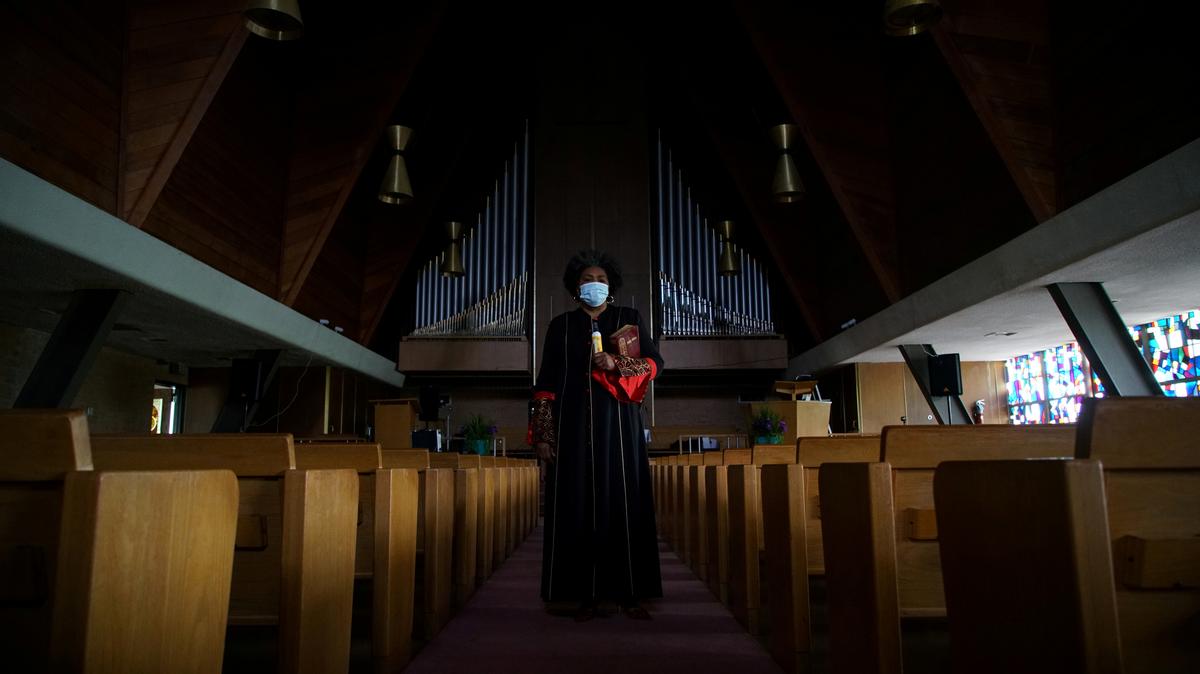 (Reuters) – When Traci Blackmon, the senior pastor for a predominantly black church in the suburbs of St. Louis, Missouri, is finally able to open the doors for service again, one of her main concerns is the collective sorrow her congregation will experience.

Pastor Traci Blackmon poses inside the closed Christ the King United Church of Christ, where five members of her 180-member congregation had gotten sick from the coronavirus disease (COVID-19) and two have died, in Florissant, Missouri, U.S. May 22, 2020. REUTERS/Lawrence Bryant

Five members of her 180-strong congregation have gotten sick from the coronavirus and two have died. Two others have died during lockdown due to other causes.

But because the doors of Christ the King United Church of Christ have been closed since the end of March to help stop the spread of the virus, members of the church have not been able to be together and console each other.

“It’s almost like a suspended grief,” said Pastor Blackmon. “It’s like when a storm cloud is hanging over and you know that it is going to rain, but it hasn’t fully rained yet.”

Protestant churches with predominantly African-American congregations has played a crucial role in U.S. history, forging historically black colleges and universities such as Morehouse College in Georgia, fueling the Civil Rights Movement, and serving as campaign stop mainstays for political candidates interested in appealing to black voters.

Many of these churches are now bracing to play a prominent role as the United States grieves for its coronavirus dead.

More than 98,000 people in the United States have lost their lives after battling COVID-19, the respiratory disease caused by the novel coronavirus, and a disproportionate number of them have been black.

In Missouri, while only 11.8% of the state’s residents are black, they account for 37% of reported deaths from COVID-19, according to figures released by the Missouri Department of Health.

Similar racial disparities have appeared across here the United States.

Black Americans are the most religious ethnic group in the country, with nearly half attending religious service at least once a week.

One of those faithful was Christ the King’s Eugene Young.

Young would drive his wife, Annie, who he married nearly 45 years ago, to and from church services in the St. Louis area every Sunday, she recalled recently in a telephone interview. He called her “Precious” and was always able to make her laugh. She called him “Sunshine.”

She described a “storybook romance,” with three sons she calls her “kings,” 10 grandchildren and three great-grandchildren.

Young became sick from the coronavirus in April, though it remains unclear how he caught it. He died at the age of 61, on Easter Sunday, April 12.

“It’s so fresh for me. It’s still unbelievable to me,” Annie Young said.

Because of social distancing guidelines to stop the spread of the virus, Young’s family had a visitation at a funeral home, not the church, limited to ten people at a time. There was no touching or hugging to comfort family members. Everyone needed to wear a mask.

“My three kings and myself got to see him by ourselves, just the four of us, and we got to spend just a little while with him,” she recalled. “So that was our time to say goodbye.”

Christ the King’s congregation has been keeping in touch through the crisis through Zoom calls, Facebook livestreams of sermons given from Blackmon’s dining room and Bible studies conducted over the phone, but it isn’t exactly the same, members say.

Wesley Hurt, 77, and his wife Linda joined the Christ the King congregation more than 40 years ago, and have continued to attend services online during the lockdown.

“The whole camaraderie thing is lost, to a certain extent. We are a church that likes to fix meals for each other and we do a lot of cooking. So we haven’t had that opportunity to meet and come together and have our church dinners like we’d normally have,” Hurt said.

Though Missouri allowed churches to reopen on May 4, Christ the King United Church of Christ remains closed. Blackmon said she remains cautious until she sees progress in a number of factors, including testing.

Blackmon had initially planned to hold an Easter service when people were able to safely sit in the pews again, no matter the date.

But she worries now that the celebratory holiday would ring false for people grappling with all that had been lost from the pandemic.

Instead, she is considering devoting the first service to Good Friday, the Christian holiday commemorating the death of Jesus.

Republicans Get to Work Planning for 2022 and Beyond
‘A perplexing find’: Murder hornets discovered in US for the first time this year
‘ISIS Obsessed’ Woman Converts to Islam, Plots Bombings in New York City Because of ‘Islamophobia’
The Capitol Riot Indictments Do Not Suggest an FBI Entrapment Scheme
Our Moderately Conservative Supreme Court