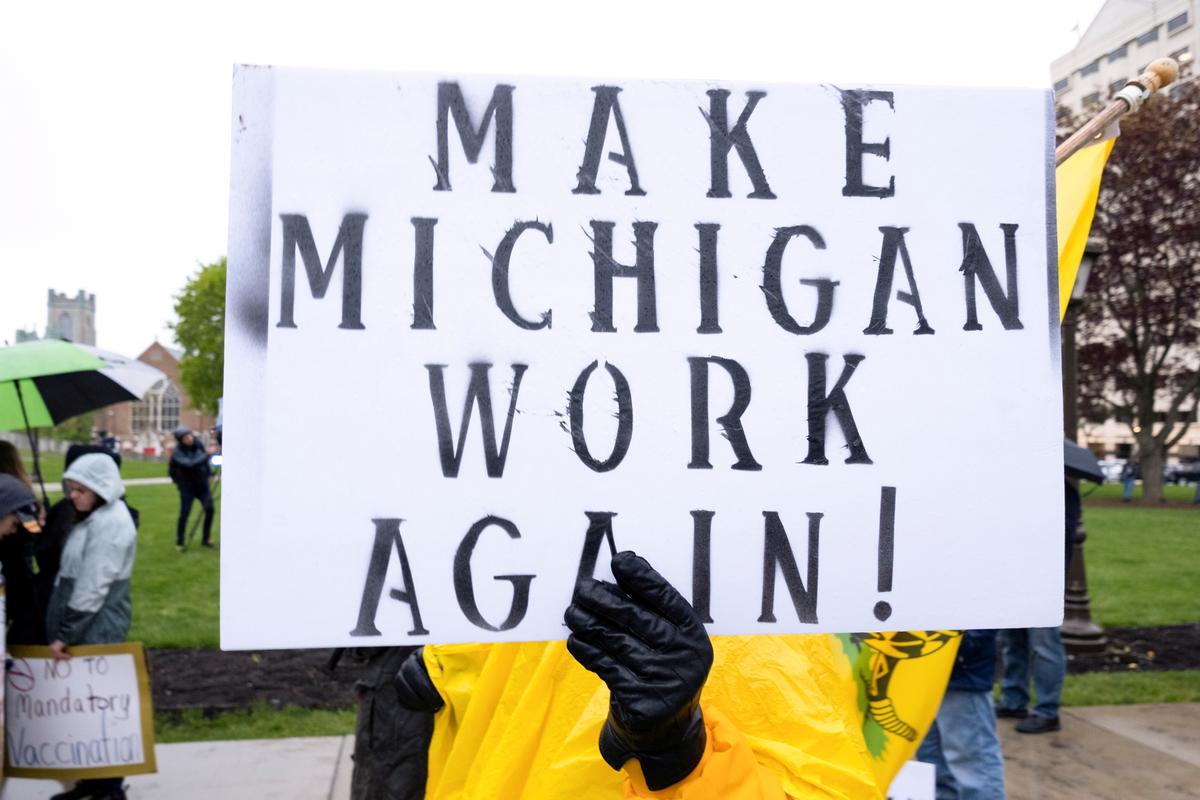 DETROIT (Reuters) – Michigan Governor Gretchen Whitmer is facing an increasingly mainstream backlash against her stay-at-home orders, with a growing number of local officials and business leaders arguing the restrictions have outlived their usefulness.

FILE PHOTO: A protester holds a placard during a protest against Governor Gretchen Whitmer’s extended stay-at-home orders intended to slow the spread of the coronavirus disease (COVID-19) at the Capitol building in Lansing, Michigan, U.S. May 14, 2020. REUTERS/Seth Herald

Some Democratic lawmakers in Michigan have pointed to armed demonstrators at a series of high-profile protests at the state Capitol in Lansing in recent weeks as evidence that most of those who opposed her measures to curb the spread of the coronavirus were politically motivated right-wing activists.

But despite Whitmer’s move this week to loosen rules in the state’s northern regions, criticism now is mounting from senior law enforcement officials and establishment business figures that the restrictions are unenforceable. Others complain her latest moves were overdue in reviving a shattered economy.

Rich Studley, CEO of the Michigan Chamber of Commerce, told Reuters that while the governor’s original stay-at-home order was timely and necessary, people were reaching a breaking point with its vague and shifting requirements.

“People who are trying to be responsible and trying to be helpful are just more and more wondering why they should remain under house arrest,” he said.

Whitmer, who according to polls remains popular in Michigan, on Monday announced a partial economic re-opening in 32 northern counties beginning Friday, acknowledging that those areas had not been severely impacted by the coronavirus.

Under the new rules, restaurants there will be able to resume operations subject to restrictions, such as limiting seating to 50% of normal capacity.

“These rules are not optional. They will be enforced,” Whitmer told a briefing, adding that state campgrounds and bans on vacation rentals remained in effect.

Whitmer, who has been floated as a potential running mate for likely Democratic presidential nominee Joe Biden in November’s election, has acknowledged that the shutdown in swing state Michigan has been among the strictest in the country. The current stay-at-home order runs through May 28.

She has argued the strict response was merited with the state reporting the fourth highest death toll in the country from the virus – 5,017 deaths as of Tuesday.

President Donald Trump, who has criticized Whitmer and other governors for extending shutdowns, is scheduled to be in Michigan on Thursday to visit a Ford plant that is building ventilators to treat COVID-19 patients.

Businessman Erik Kiilunen has been pushing for a “Take Yourself to Work Day” protest on that same day in which business owners simply open shop.

And a growing number of Michigan sheriffs have said they will not strictly enforce Whitmer’s orders, including Chris Swanson, the Democratic sheriff of Genesee county, which includes Flint.

“We have not shut a business down. We’re not pulling people over. We’re not writing tickets. And don’t expect us to do it,” Swanson told a local podcast last week.

Even Detroit Mayor Mike Duggan, a Whitmer ally, said on Monday that data showed the hard-hit city was ready under her guidelines for a broader re-opening of businesses.

Whitmer’s stay-at-home order had “no justification for continuing,” the Detroit News said in an editorial on Tuesday, noting that some hospitals had been laying off staff because occupancy was so low.

“Michigan is more at risk of seeing its health care system collapse for want of patients than from a tsunami of critically ill virus victims,” the newspaper said.

Reporting by Michael Martina and Ben Klayman in Detroit; Editing by Tom Brown