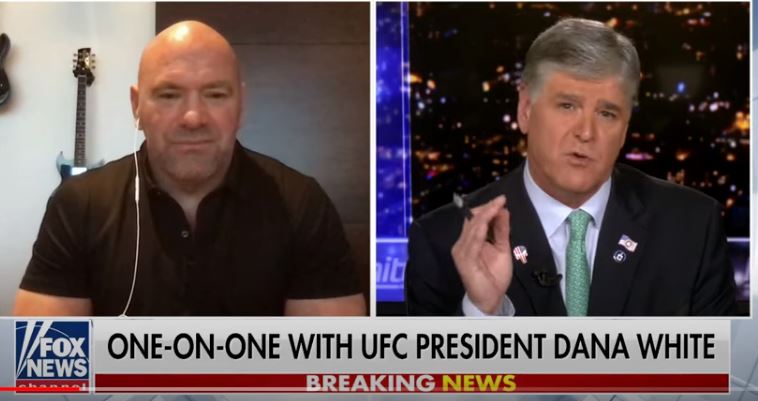 If you’re the head of a sports organization and you complain about media basis, you’re just taking a leaf out of President Donald Trump’s book on media criticism. So says Guardian Sport in a Tuesday post. UFC President Dana White on Monday evening told Fox News’ Sean Hannity that the New York Times, the Guardian and other media tried to sabotage his May 9 fight card in Jacksonville.

“We were trying to figure out solutions to the problems [of enforcing coronavirus protocols] and [asking] how do you bring sports back safely and health and safety is an issue for us,” White told Hannity. “Every single weekend when we were leading up to these events, we had so many, you know, New York Times and so many other media people trying to sabotage the events so that it couldn’t happen.”

White called Kevin Draper, the New York Times reporter who covered the UFC event, “a dickhead”. Draper had criticized White and the UFC for not requiring people in attendance to follow safety protocols and for not wearing masks.

Guardian Sport writes that White “has taken a leaf out of his friend Donald Trump’s playbook, and launched an attack on the media for its reporting on the promotion.” And added: “White followed Trump in complaining that media outlets were not giving him positive coverage.”

“Both Trump and White have homed in on individual reporters who have criticized them. Last week, White used a UFC press conference to attack Draper’s reporting,” Guardian Sport reported Tuesday.

As if complaints about media bias only emanate from President Trump’s media criticisms.

ESPN broadcasted that UFC event, and Draper interviewed its president, Jimmy Pitaro, for 45 minutes, then blew off all the quotes he’d gathered because they were positive. That was the accusation of White, who really unloaded on Draper:

On May 11, Guardian Sport writer Karim Zidan also accused UFC of practicing questionable safety protocols regarding coronavirus and of trying to silence reporters.

Hannity told White he was glad he ripped the New York Times and the paper is running repeated anti-UFC stories just to get internet clicks. White insists he’s taking proper precautions to protect participants from COVID-19. UFC is planning another fight card for May 30 in Arizona.