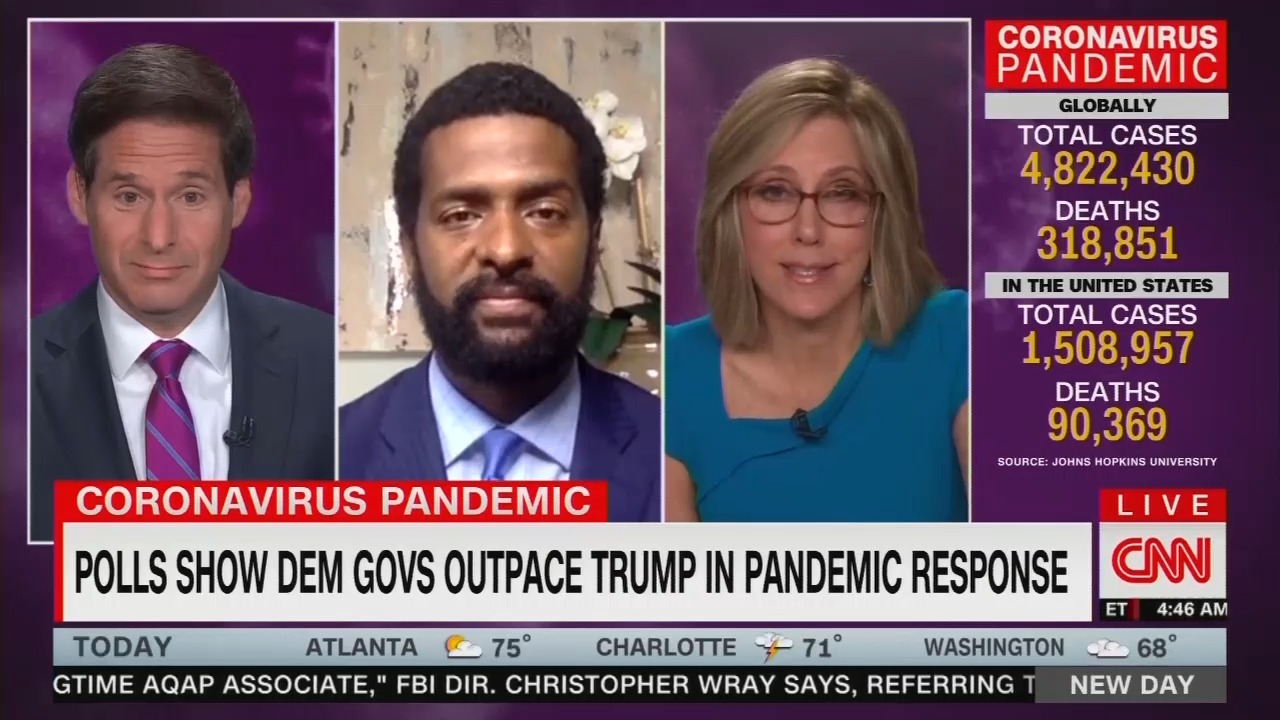 The journalists at CNN on Tuesday conducted a Democratic strategy session as hosts Alisyn Camerota, John Berman and liberal commentator Bakari Sellers worried that Donald Trump’s “simple message” on reopening the country might actually resonate with people. Camerota fretted, “Bakari, as you know, President Trump also doesn’t really deal in details and so one of the things that he’s good at is sort of the simple message, the slogan.”

She described this message as “Everybody wants to go back to work. Let’s reopen.” The idea this might be successful was obviously concerning as Camerota wondered, “Republicans, Democrats, everybody wants their old normal. So is he winning in that way of making it seem simple and that he’s on the side of getting life back to normal?”

How bothered was Camerota? She rephrased the same question to Sellers again: “Do you worry at all that President Trump is appealing to more than his base — to some of the Independents or whomever — Democrats who think that his message is just more of sort of cheerleading one than the doctors who keep wagging their fingers at us?”

The Democratic strategy session concluded with Seller referring to “we” when discussing what the Democrats must do:

JOHN BERMAN: Joining us now, CNN political commentator Bakari Sellers — wow. He is the author of the new book “My Vanishing Country.”

JOHN BERMAN: I spent the weekend reading your book and I loved it. We’ll get to that in just a moment.

BERMAN: But first, I want to you ask you about the politics now of this because the President is clearly betting in some way that attacking governors — largely, Democratic governors for not opening or easing restrictions as quickly as the president would like is good politics. What’s the reality?

SELLERS: Well, I think that the president is going to delve into culture wars. He’s going to pick these battles until he finds one that works. But I will — I will have to say I am not going to fall down along partisan lines in this issue because governors such as Larry Hogan in Maryland or Charlie Baker in Massachusetts have done yeoman’s work. You have to find a balance between public health and the economy and actually having a good public health strategy is good for the economy. And so, while the president may not follow science, I’m hoping that the governors and mayors of these large cities are. What we’re seeing is that Eric Garcetti and Gavin Newsom are doing a hell of a job leading their great state. We’re seeing Andrew Cuomo doing a great job. We’re seeing Mayor Steve Benjamin in Columbia doing a great job. The President of the United States, though, just simply doesn’t believe in facts. He doesn’t believe in science. And as we found out yesterday, he’s taking hydroxychloroquine like Tic Tacs. And so, we can’t put a lot of faith in that at the top.

CAMEROTA: Bakari, as you know, President Trump also doesn’t really deal in details and so one of the things that he’s good at is sort of the simple message — the slogan. And so, isn’t he being more identified with ‘Let’s get the country back — let’s reopen – everybody wants to go back to work — let’s reopen’ — than Democrats? And in that way, since this is not a partisan issue, everybody wants their old life back. Republicans, Democrats, everybody wants their old normal. So is he winning in that way of making it seem simple and that he’s on the side of getting life back to normal?

SELLERS: Well, I think that that’s the argument he’s trying to make. He wants to be the person who is saying reopen America. The problem with that, Alisyn — and you guys always bring a tear to my eye — it’s the best show on TV because you pay attention to the human side of what’s going on. You guys talk about those lives that are lost. The president, he can say reopen all he wants, he can try to delve us into culture wars, but he cannot erase the fact that 90,000 Americans died on his watch. Thirty-six million people are unemployed on his watch. And the reason being is because he doesn’t believe in detail, because he doesn’t believe in science, because he doesn’t believe in fact. And, Barack Obama laid a pandemic playbook out for him — even Mitch McConnell will acknowledge that — one that he has shredded, torn up, and thrown out the window. And so, he may have had a good message on reopening and it may poll well. However, what he cannot overcome is 90,000 dead and 36 million out of a job.

BERMAN: But here’s the thing, he doesn’t poll well. We always say everyone wants things to be open. It’s just not true. The polling tells us the exact opposite. I mean, I’ll put this up on the screen here. We asked people if they’re comfortable returning to their daily routines in May seventh to 10th. Only 41 percent said yes, 58 percent said no. It’s ticked up slightly from April but basically within the margin of error there. And if you ask about popularity of the nation’s governors — again, the governors who have led these states who have had restrictions in place — they are beginning to raise them — the popularity is wildly high. You know, DeWine, Cuomo, Newsom, Northam, Whitmer. Whitmer, you know, there are these protests with armed guards out there or armed people every day. It’s a fraction — her — she’s at a 72 percent approval rate. So it’s just not clear to me that there’s this giant national unanimous outcry for reopening. And honestly, it’s a false choice, by the way. It’s not reopen versus —

SELLERS: But John, I think you’re kind of missing the point because I do not believe that Donald Trump messages for most of America. I think he messages for the 35 percent which is his base. He’s going to have 62 million Americans come out and vote for him. That’s — I mean, they are there. I think he’s messaging for these individuals who all of a sudden believe that they’re Rosa Parks by going down the — to Detroit, Michigan and protesting and doing squats outside of state capitols, et cetera. And so, he is not necessarily speaking to those individuals who believe that we have to follow the signs and that we have to take our public health serious. But I agree with you that it is a false choice. But, Donald Trump is very good at one thing, which is giving red meat for the base of the Republican Party, which is why he excels with that type of politics.

CAMEROTA: Well, also I would say, John — and to contrast your facts that you keep throwing around and your stats — I mean, as former Speaker of the House Newt Gingrich once famously told me on our program, ‘I’ll let you deal with the statisticians all day long. I’ll take how people feel.’ And, Bakari, on that front — I mean, I understand what John is saying. Yes, are people really comfortable going out to a restaurant? No. Do people long for their old life? Yes, they do. And so, do you worry at all that President Trump is appealing to more than his base — to some of the Independents or whomever — Democrats who think that his message is just more of sort of cheerleading one than the doctors who keep wagging their fingers at us?

SELLERS: I think that there — people have to take Donald Trump seriously. I know that’s difficult sometimes with the lack of complete sentences, with the inability to actually talk about this issue with some coherent nature. But you have to take him seriously. The fact is that as I’m sitting before you today I have to preface all my comments, but I thought that Hillary Clinton was going to be the next President of the United States and we saw how that worked. So, Democrats, we have to message and we have to say something other than we’re not Donald Trump. But I still do not believe that he’s going to get over the fact that incompetence caused 90,000 people, and that number still is going up, to lose their lives to a pandemic that did not have to — did not have to wreak havoc the way it did. He’s still going to have to apologize for the lack of testing. He’s still going to have to apologize just for the inept way that his government has run through this pandemic.