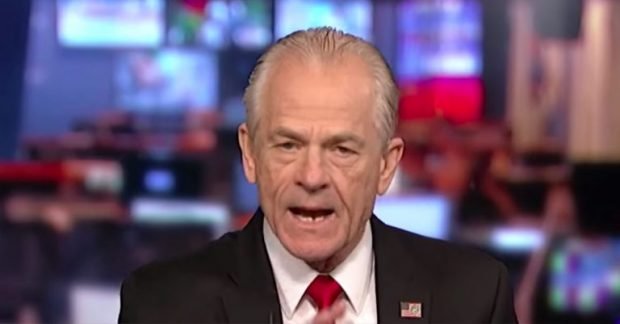 White House economic adviser Peter Navarro swatted down the possibility that the coronavirus stimulus package passed by House Democrats would be acceptable by the Trump administration.

During a Sunday morning appearance on ABC’s “This Week” with Georgia Stephanopoulos, Navarro said House Speaker Nancy Pelosi “lost me” with her party’s stimulus bill. The legislation includes a slate of poison pills for the GOP, including cash assistance for illegal aliens, protections for sanctuary cities, and other far-left provisions.

“So, Nancy Pelosi basically lost me with that package when she has $1,200 checks for illegal immigrants, it goes downhill from there,” Navarro, the director of trade and manufacturing policy within the administration, said Sunday when asked about the bill.

“What we have to do, George, is basically go with the fiscal and monetary stimulus that we have been going through. We’ve got a lot coursing through the system now,” Navarro said. “We may need more. I’ll let others above my pay grade negotiate that.”

“What I’m focused on, George, and this is the real key to success,  is going to be the structural adjustments we’re going to have to make,” he continued, suggesting that the U.S. would need to replace lost service jobs by creating more opportunities in the manufacturing industry.

House Republicans introduced an amendment that would’ve prevented illegal aliens from receiving the stimulus checks, but Democratic lawmakers shot it down before passing the bill on Friday.

The legislation also calls on Immigration and Customs Enforcement (ICE) to reduce its detainee population, and bars the administration from withholding federal grant money from localities that refuse cooperation with federal immigration authorities. i.e. sanctuary cities.

The bill is not expected to survive in the GOP-controlled Senate.