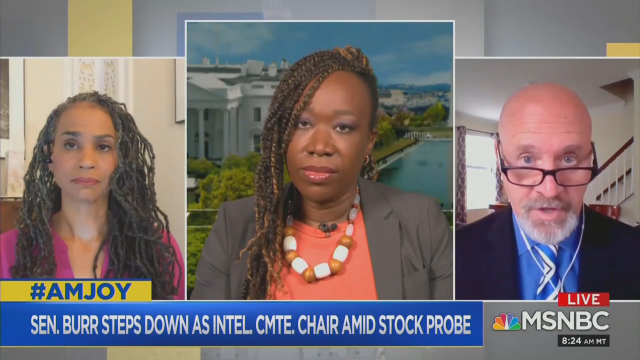 As chairman of the Senate Intelligence Committee, in January and February Burr received classified information about the then-impending coronavirus epidemic. After receiving that information, and before the extent of the coronavirus threat became public, Burr, in early February, sold a substantial portion of his stock portfolio.

Kirschner himself said “it sure looks like potentially criminal conduct.” Now let’s imagine that, given those facts, the Justice Department had declined to investigate Burr, a Republican.

What do you think Kirschner’s reaction would have been?

JOY REID: The potential insider-trading investigation. How much trouble are these senators, particularly Mr. Burr–how much trouble do you think they’re in?

GLENN KIRSCHNER: Well, good morning, Joy. Nice to so you again. It really seems like the amount of trouble they may be in depends on how Donald Trump is feeling about their loyalty.

You know, the problem is, when we see a Senator Richard Burr apparently involved in insider trading, because, you know, in 2012 congress passed the STOCK act: S-T-O-C-K: Stop Trading On Congressional Knowledge–a cute acronym, right? When it looks like Richard Burr is taking advantage of information he receives in his capacity as the chair of the Senate Intel committee, using that information before it’s available to the public and dumping stocks or buying stocks and earning a whole bunch of money in the midst of this coronavirus national emergency, it sure looks like potentially criminal conduct.

The question then unfortunately becomes how does Donald Trump and by extension Bill Barr feel about Richard Burr’s loyalty or lack of loyalty? Now we all know, Richard Burr has not necessarily been a lapdog for Donald Trump because that committee has been issuing reports, intelligence reports, saying, look, you’re darn right Russia interfered in the 2016 presidential election. And President Trump doesn’t like that. So he certainly has a motive to corruptly go after Richard Burr.

Typically, the MSNBC analyst pretends Trump never acknowledged Russian interference in the 2016 elections, and confuses that with the unproven claims that Trump’s campaign colluded with the Russian government.

Kirschner contrasted the treatment Burr has received with that of other senators who also sold stock during the period. In fact, at least one of them, Republican Sen. Kelly Loeffler of Georgia, has turned over documents to the Justice Department relating to her trades. In any case, there would be nothing surprising about DOJ focusing particular attention on Burr. Not only is he the chair of the Intel Committee, but in that position might have been privy to information that others did not receive.

And as our Curtis Houck has noted, Kirschner is the same kook who suggested that President Trump could be prosecuted for “homicide” over his comments on the coronavirus!

WashPost ‘Fact Checker’ Admittedly Uses Faulty Data to Dismiss Good Guys With Guns
Are You Ready for the Trump vs. DeSantis Showdown?
A Warning to Americans From Across the Pond: Don’t Take Your Free Speech Rights for Granted
Is the Trans Cult Putting the Nation’s Blood Supply at Risk?
Haunting video of Tyre Nichols arrest is sickening indictment of policing that night