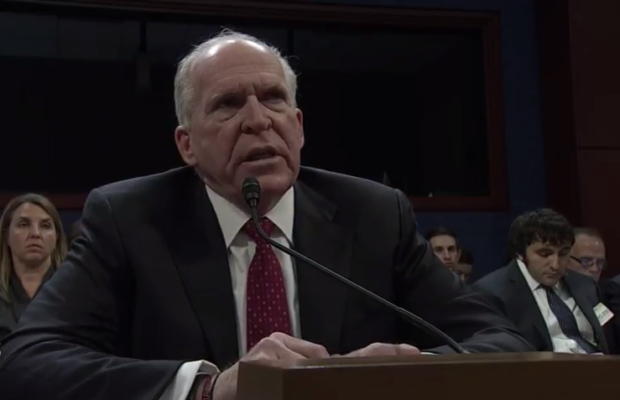 Former CIA Director John Brennan said Friday that he has yet to be interviewed by the federal prosecutor investigating the origins of the Trump-Russia probe, but that he is willing to do so and has “nothing to hide.”

“I feel very good that my tenure at CIA and my time at the White House during the Obama administration was not — that was not engaged in any type of wrongdoing or activities that caused me to worry about what this investigation may uncover,” Brennan said in an interview with MSNBC’s Chris Hayes.

“I have not yet been interviewed by any of those individuals involved in this matter, but I’m willing to do so because I do believe that for too long, the American public have been misled by Donald Trump, by William Barr and others.”

John Durham, the U.S. attorney for Connecticut, has been investigating several aspects of the FBI, CIA and other agencies’ investigations and intelligence-gathering activities related to associates of Donald Trump in 2016 and 2017.

Durham is reportedly scrutinizing Brennan’s activities, though there is no indication that the prosecutor has uncovered any wrongdoing on the former spy chief’s part.

The New York Times has reported that Durham has requested Brennan’s CIA communications to find out what role he played in developing an Intelligence Community Assessment that said the Russian government intervened in the 2016 election specifically to help Trump.

On Wednesday, two Republican senators released a list of Obama administration officials who made requests for intelligence reports that that led to the “unmasking” of Michael Flynn.

Brennan defended the so-called “unmasking” requests, saying that he and other Obama administration officials were “carrying out our responsibilities correctly” when they requested intelligence reports that discussed Flynn.

Brennan asserted that he is in Trump’s “crosshairs” because he has “spoken out against the corruption, the incompetence, the mischaracterizations that he and individuals around him have made to the American public.”

Durham is also reportedly investigating some of the same areas detailed in a Justice Department inspector general’s report on the FBI’s Crossfire Hurricane probe. The IG found that the FBI made 17 “significant” errors and omissions in applications for surveillance warrants against former Trump campaign aide Carter Page.

Many of the omissions centered on the Steele dossier, the unverified report that the FBI used to obtain authorization to wiretap Page.

The IG report said that FBI investigators withheld exculpatory information that undercut the theory that Page and other Trump aides were working with the Kremlin. FBI and Justice Department officials also failed to disclose information that called dossier author Christopher Steele’s reliability into question.