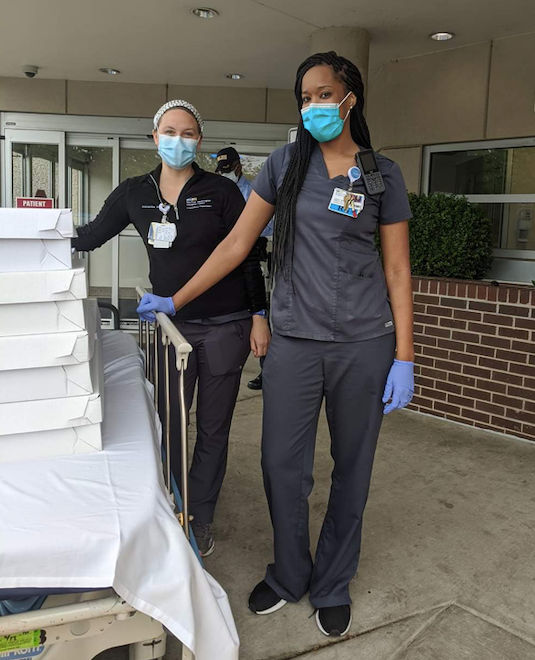 Washington, D.C., emergency room nurse Anaelise Martinez and her roommate, Azure McFarlane, posted on Facebook on March 30, asking their friends to help them send food from the restaurant Buffalo & Bergen to the medical personnel at Prince George’s Hospital Center emergency room in Cheverly, Maryland, just outside of Washington.

Within 24 hours, they had exceeded their $700 goal and launched a formal fundraising campaign called Feed the Heroes DMV. The “DMV” is shorthand for the District of Columbia and its suburbs in Maryland and Virginia.

“We want to continue spreading the love to our health care staff and first responders in the DMV,” McFarlane wrote on her Facebook page on March 31.

The roommates and their friends have continued to raise thousands of dollars to purchase meals from Buffalo & Bergen and deliver them to health care workers at hospitals across the Washington, D.C., metro area.

The Heritage Foundation, a conservative Washington, D.C.-based think tank and the parent organization of The Daily Signal, and many generous individuals have partnered with Feed the Heroes DMV to supply the resources needed to purchase hundreds of meals to medical professionals.

On April 24, donations from The Heritage Foundation and others allowed Feed the Heroes to deliver 300 meals to MedStar Washington Hospital Center, feeding an entire shift of workers. The meal delivery was timely, as the hospital’s cafeteria was closed that day.

The Heritage Foundation has since made the donation a weekly gift with staff contributing more than $18,000 to Feed the Heroes so far. The contributions have fed staff at Howard University Hospital, Doctor’s Community Hospital in Prince George’s County, and D.C. Fire and Emergency Medical Services personnel.

“Together with Feed the Heroes, the Heritage family has been able to serve 800 hot meals to emergency room workers in just a few short weeks,” Heritage Foundation President Kay C. James told staff Friday. “Not only has this partnership fed frontline health care workers, but it has also had a profound impact on two of our favorite small businesses—Buffalo & Bergen and Junction Bistro.”

Buffalo & Bergen owner Gina Chersevani says she would not be able to keep her doors open if it were not for the orders from Feed the Heroes DMV.

“I need the business to survive, so how cool is it to be able to keep the restaurant going [and] feed the people that need it?” she said.

Chersevani praised the work of Martinez and her friends, saying, “I am impressed … . She is just doing the right thing because it’s innately in this girl. So, how could that not be contagious to help?”

The restaurant has gone from having 37 employees at two Buffalo & Bergen restaurant locations in Washington, D.C., to just three full-time and two part-time employees.

In addition to helping to cover the costs for the meal orders, The Heritage Foundation has also captured the attention of The Washington Post and the appreciation of Chersevani for forgoing Buffalo & Bergen’s rent for up to six months.

Eric Korsvall, vice president of operations at the think tank, manages Massachusetts Avenue Properties, which includes Buffalo & Bergen’s 240 Massachusetts Ave. NE location. The break in rent is allowing the bar and bagel restaurant to continue doing what it does so well; namely, feeding people tasty food.

“Eric has really been wonderful. … He really is a different person. He is very giving … . It is just refreshing. He is like the twist of lemon on a very dry martini,” Chersevani said. “You are not really sure what to expect from The Heritage Foundation, and you know, like Capitol Hill and all those people, and then you put a little lemon zest on it, and it brightens the whole thing up. So that is what he [Korsvall] is like to me.”

At a time when so many people are asking how they can help, Chersevani says we all can and should do something to help those in need.

“And I keep saying to people, you know, the hospital workers or the fire department, they are like our front-line defense on getting the people the help that they need … . If you have anything to give;  it might be time. … Or you got your stimulus check, and you don’t need it. Give it away! … Make a difference,” she said. “It’s amazing how good it feels to change someone’s day.”

This story was originally published May 4, 2020, and includes updated information.