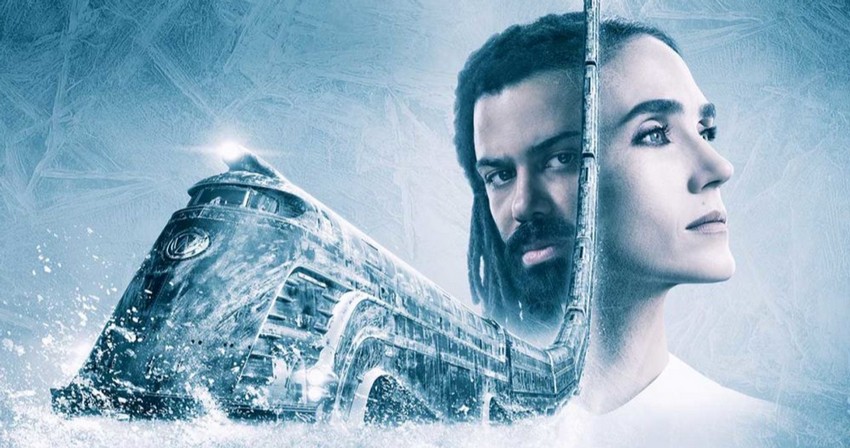 These days, the last thing we want to think about is being cooped inside for what seems like forever. Unfortunately for us, that happens to be the plot of TNT’s Snowpiercer which premiered May 17. Based on the 1982 French graphic novel Le Transperceneige as well as the 2013 movie Snowpiercer, we follow a post-apocalyptic society that doesn’t forget to remind us about the true horror: climate deniers.

The pilot “First, the Weather Changed” introduces us to what it conceives as the future. Scientists attempted to fire chemicals into the atmosphere to fight against global warming, but the result instead led to a massive, uninhabitable Ice Age. To survive, a wealthy industrialist designed and constructed a massive perpetual-motion train called “Snowpiercer” to house the remnants of humanity. Very quickly, a caste system forms on the train, with the wealthy elite housed in the front and the starving poor at the tail end. Riots, we soon see, are frequent as the tail end passengers fight for more food and better conditions from the hoarding rich.

Amid the obvious class allegories and an entire apocalypse happening outside, the show throws several characters and conflicts into the mix to keep this engine going. There’s Layton (Daveed Diggs), a former homicide detective who now leads the rebellion among the “Taillies,” along with Melanie (Jennifer Connelly), a first-class passenger who helps keep order within the train. However, none of the characters compare to the horror brought upon by the “deniers” of the old Earth.

In an animated prologue, Layton describes the background of the train as well as what caused the new Ice Age. Some of the very first words we hear from the episode emphasize how the climate change deniers “doomed us with their lies.” In a way, everything bad that happens in this series can now be attributed to them.

Layton: First, the weather changed. The deniers knew why, but still they doomed us with their lies. War made the Earth even hotter. Her ice melted, and all her species crashed. So, the men of Science tried to cool the Earth, to reverse the damage they had sown. But instead, they froze her to the core.

Contrary to what this show, and every other leftist politician would have you believe, “deniers” are not “dooming” us with their “lies.” In fact, a lot of the so-called “deniers” have actually exposed many lies from the climate activists including but not limited to melting polar ice caps, rising temperatures, and the end of life as we know it. It’s almost more plausible to believe in a perpetually moving train than a cohesive climate change argument at this point.

As far as the show goes, blaming global warming deniers for the end of the world is hardly anything new. Neither is complaining that the rich are hoarding everything from the starving poor for that matter. We still have a long way to go with Snowpiercer, but my interest has already left the station.

White Privilege Virtue-Signaling Scarborough: I Wouldn’t Have Been Beaten Like Tyre
Marjorie Taylor Greene got threatening voicemails from man who spelled his full name, left his phone number, and dared her to press charges. His wish was apparently her command.
‘These cops were blue before they were black’: Ana Navarro of ‘The View’ downplays race of black police officers charged with murdering black man Tyre Nichols
‘Seinfeld bill’ is real. It’s going through the N.J. state legislature to battle telemarketers — and some might even call it spectacular.
Could Lower Standards for Police Recruits Breed Future Misconduct?