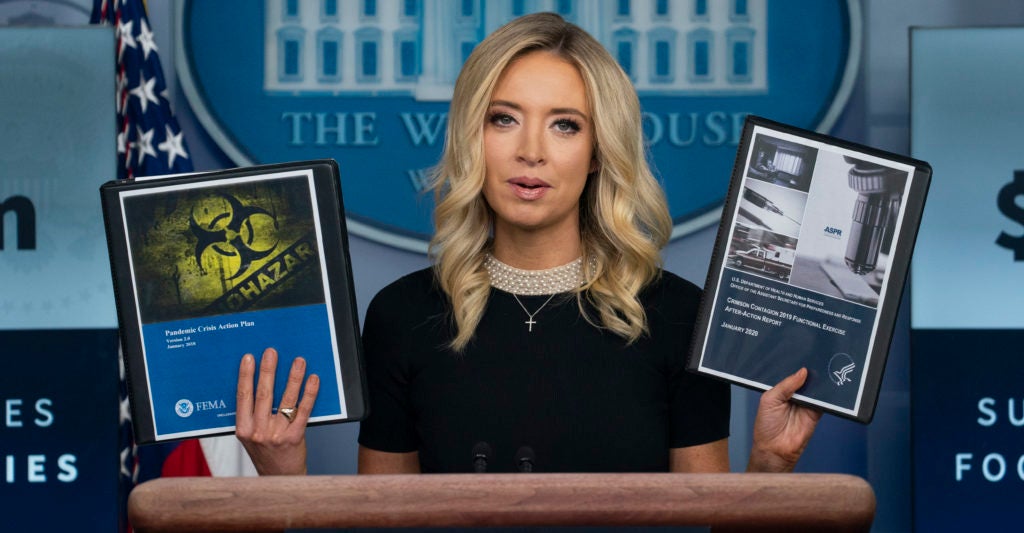 The White House pushed back on the media narrative that the Obama administration left behind a pandemic “playbook” for the Trump administration.

White House press secretary Kayleigh McEnany said Friday the playbook from the Obama administration was an insufficient packet of paper, and the Trump administration’s own pandemic response exercise in 2019 exposed its shortcomings.

On Thursday, Dr. Rick Bright, a senior advisor at the National Institute of Health who filed a whistleblower complaint against President Donald Trump, told a House Energy and Commerce subcommittee on health that the administration should have known more about the coronavirus.

Bright said, “we were not as prepared as we should have been.”

“We missed early warning signals and we forgot important pages from our pandemic playbook,” Bright said. “There will be plenty of time to identify gaps for improvement.”

Much of the mainstream media, including CNN, Politico, and PBS, ran with the narrative that the Obama administration left a pathway for the Trump administration to better handle the coronavirus.

McEnany said during the Friday press briefing that wasn’t the case.

The press secretary added that, “In 2018 the Trump administration issued our pandemic crisis action plan.” She continued:

Further from August 13th to the 16th, the Trump administration conducted the Crimson Contagion 2019 Functional Exercise. This was a pandemic simulation to test the nation’s ability to respond to a large-scale outbreak.

In January of 2020, [the Department of Health and Human Services] issued the Crimson Contagion 2019 Functional Exercise after-action report. This exercise exposed the shortcomings in legacy planning documents, which informed President Trump’s coronavirus response.

Big Pharma Is Hoarding Over $1 Billion In Payments For Cancelled Vax Doses
London School of Economics to ditch religious terms like ‘Christmas break’
Column: This Just In, Journalistic Objectivity Is Obliterated
College Board admits defeat at the hands of Ron DeSantis, and liberals are outraged: ‘A win for fascist intimidation’
Unwanted Baggage