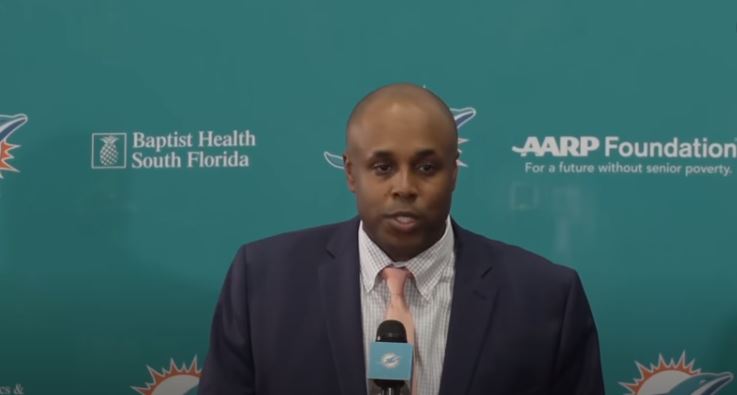 Talk about reverse discrimination! On Tuesday, NFL owners will meet via video conferencing to consider incentives to hire more minority executives and coaches that amount to affirmative action on steroids. Get this: under this proposed plan, teams that hire nonwhite general managers, coaches or assistant coaches would move up several positions in the third round of the draft and receive an extra pick. Other teams, including those not in the market for new coaches, get zippo.

Also, teams dismissing a minority head coach after a single year on the sidelines, as the Arizona Cardinals did with former head coach Steve Wilks in 2018, will lose a draft pick. Under the proposals, Miami, which hired Brian Flores (seen in photo) in 2019 and who remains as head coach, would receive advantages not given to other teams, in the 2020 NFL draft.

“Stung by widespread criticism, the owners’ Workplace Diversity Committee, with the backing of Commissioner Roger Goodell, proposed the sweeping set of changes, which must be approved by at least 24 of the 32 owners. Some of these measures were considered in February when the committee met at the draft scouting combine.”

In typical progressive wordsmithing fashion, the NFL’s new, “more aggressive approach to reshaping its highest ranks” will be to use so-called “tangible incentives, not penalties, to get teams to hire more nonwhite coaches and general managers in a league in which about 70 percent of the players are African-American,” Belson reports.

Reshaping its highest ranks? That’s a round-about way of saying too many NFL general managers and coaches have the wrong complexion. Thus the need for, dare we say, reverse discrimination.

Try using that “tangible incentive” approach to justify to teams — think Kansas City and New England — with successful, entrenched white coaches who’ve won Super Bowls, why they are being hit with these “non-penalties.” Their coaches aren’t going anywhere, yet they’re at a disadvantage come draft time.

Here’s how a 2021 version of NFL-style affirmative action would work, according to Belson’s Friday story.

The Workplace Diversity Committee is proposing that a team hiring a nonwhite head coach will move up six spots from its position in the third round of the NFL draft preceding that coach’s second season.

Teams that hire a nonwhite general manager will fare even better. They’ll move up 10 spots in the third round of the draft before that executive’s second season with the team.

Wait, there’s more to this. Under the same proposal, a team that hires a person of color as quarterbacks coach will receive an extra draft pick if that coach remains with the team more than one season. Teams with successful nonwhite coordinators cannot attempt to keep them by preventing other teams from interviewing them for head coaching jobs.

These “tangible incentives” also apply to any team that hires a woman for a leading role in coaching or a position in the player personnel department. Surprisingly, there are no incentives proposed for transgenders … yet!

Additionally, a team receives an extra draft pick if one of its minority assistant coaches is hired by another team as a coordinator, head coach or general manager.

No matter how progressives spin it, teams that are winning on the field and keeping their white coaches will be punished for that word so despised by bleeding heart libs: success.

It’s not all peaches and cream for teams hiring minorities, though. The Workplace Diversity Committee’s proposal punishes teams that fire minority hires after just one year of employment. That once-entitled franchise would lose its advantages for the succeeding draft. Trying to further justify this affirmative action, the committee claims the system will also discourage teams from tanking.

Good intentions in play here, perhaps, but undone by the principle of unintended consequences.