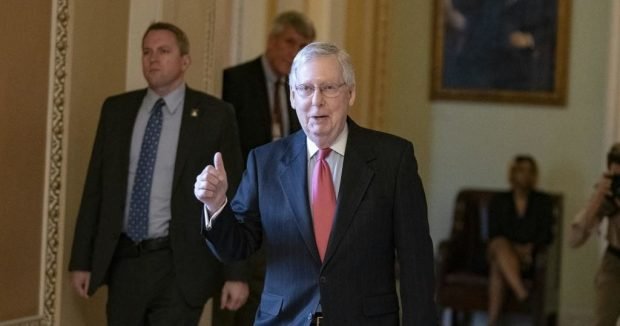 IB Times – An attempt to block an extraordinary expansion of federal surveillance failed in the U.S. Senate by one vote on Wednesday, enabling the Justice Department to collect personal data such as browser history without a warrant. Senate Majority Leader Mitch McConnell’s amendment to the Patriot Act expansion, now unchallenged, limits attorneys’ ability to question the FBI’s reasoning for surveillance.

The amendment proposed by Sen. Ron Wyden, D-Ore., and Sen. Steve Daines, R-Mont., that would have required the Justice Department to show probable cause before collecting data under the Patriot Act failed to pass the 60-vote threshold, as 59 Senators voted for it versus just 37 who opposed the bipartisan amendment, with four Senators not voting.

The new measure would limit the involvement of an attorney only when the FBI submits an application to “target a campaign for federal office or an application that targets a United States person when the application relies for its criminal predicate on only the provisions of the Foreign Agents Registration Act.” Under the McConnell amendment, Barr gets to look through the web browsing history of any American – including journalists, politicians, and political rivals – without a warrant, just by saying it is relevant to an investigation

Taken together, privacy advocates consider McConnell’s moves an alarming expansion of Attorney General’s powers under FISA, a four-decade-old process that already places the attorney general at the center of national-security surveillance. Since passing the Senate, it will shortly be on the Desk of President Trump and could get signed into law.

WHAT? How is this slipping through the radar? Looking at many aggregators and other major websites, there really is not much talk about this new provision. This should be fairly big news. I did a Google search on this topic and came up with just a few media “B” and “C” rated outlets reporting on this – see below. Why?

While the Coronavirus and #Obamagate dominates the news headlines, there are people working to take away our civil liberties. Based on the quietness of the Senate’s efforts as well as the lack of media exposure, it is as if this quick legislative action is being fast-tracked right under our noses of most people. Read this gobbledygook article from CNN. The headline says, “Senate votes to increase legal protections,” but in fact does just the opposite. It is written in a way for the powers to be to say, “you were informed” under the cloak of poor reporting.

We might think today that it would be good that Attorney General Barr can now get more information to help Trump drain the swamp. But we should be reminded that Republicans may not always be in power. One day this could back to haunt us. How much more personal information and freedom will we give up in the pursuit of protecting us?

Imagine that the FBI can now have access to your web browser history without little due process. With this information, one can tell exactly what your thinking throughout the day. This is an enormous amount of data and power to surveil the population. Doing so without you even noticing – no warrant. A gross government overreach of the government’s surveillance state.

Do you accept this?