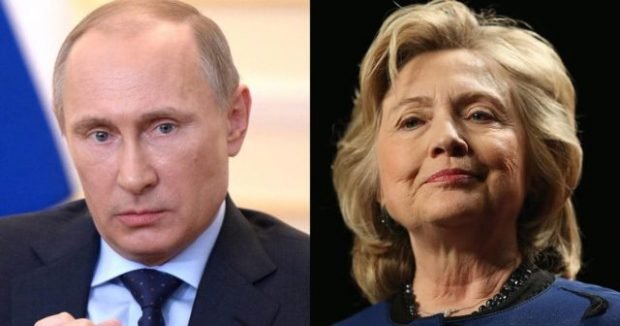 During the 2016 campaign and for the next three years democrats accused Russia of interfering with our elections and wanted Trump to win. They even went as far as calling Trump a Russian agent and trolls on the internet referred to Putin as Trump’s friend. Now it is being revealed that Russia really wanted Hillary to win because they thought she’d be easier to control.

In 2018, a report by Devin Nunes’s House Intelligence Committee ludicrously disputed the conclusion Russia even intervened on Trump’s side at all.

Now that Trump has installed political loyalist Rick Grenell as director of National Intelligence, they are trying to undo that finding. Last night, Fox News reporter Ed Henry excitedly reported to Tucker Carlson that Grenell has produced documents questioning the conclusion Russia opposed Clinton at all. Trump cites that “report” in a new interview with Fox’s Maria Bartiromo.

As more details spill out about the administration of former President Barack Obama and its efforts to derail President Donald Trump’s tenure in its infancy, a meeting at the White House two weeks before the Trump’s inauguration is taking on greater significance.

In fact, according to Mollie Hemingway, the journalist, author and senior editor at The Federalist, it was where Obama and then-FBI Director James Comey began “hatching” the plot that would turn into the “Russia collusion” probe that ate up so much of Trump’s first years in office.

In an appearance Monday night on Fox News’ “The Ingraham Angle,” Hemingway discussed that meeting – and slammed the mainstream media’s slanted coverage of an issue that’s at the heart of the Democratic Party’s efforts to overturn the results of the 2016 presidential election.

The eventually infamous Jan. 5, 2017, meeting in the Oval Office started as a larger meeting, Hemingway told host Laura Ingraham. As Hemingway described it, the meeting got down to nuts and bolts after Obama asked those present who would be departing office when his administration ended to leave the room, keeping then-Deputy Attorney General Sally Yates and Comey behind. Both Yates and Comey would be serving after Trump took office.

Also present were then-Vice President Joe Biden and then-National Security Advisor Susan Rice. “And that’s where they started hatching their plan to make sure that the incoming administration would not find out what they had been doing or what they planned to continue doing in terms of spying on the Trump campaign and people affiliated with it,” Hemingway said.

And the primary objective of protecting those secrets was targeting then-incoming National Security Advisor Michael Flynn, a man whose prosecution on an absurd charge of lying to the FBI was dropped last week in a dramatic decision by Attorney General William Barr.

Hemingway’s comment to Ingraham about the video summed it up perfectly.“This is an example of what has been going on for years, where the exact opposite of the truth keeps on getting reported. And they just keep on suppressing information,” she said.

The events of the past three years prove her point.

As it turned out, Yates and Comey were not to remain in office long under the Trump administration.Yates was fired at the end of January 2017 for refusing to enforce Trump’s executive order banning immigration from seven Muslim countries with deep ties to terrorism.

Comey, of course, was fired in May 2017 over his handling of the Russia collusion probe.

But the seeds had been planted by then.

Understandably enough, Trump is using his considerable Twitter following to get the word out about the new revelations.

Everything the Democrats and the lamestream media accused the Trump administration of doing involving collusion with Russia to win the presidency has been soundly debunked. And now we know for a fact that Comey, McCabe, Rosenstein, Brennan, Clapper, Mueller, Obama, and Biden KNEW that the Steel Dossier was a fraudulent document paid for by the Clinton campaign. These traitors also knew that they themselves had set up General Flynn and other Trump supporters—so the Mueller investigation was a complete witch hunt form the beginning.

Critics still disagree and still blame Trump for colluding with Russia. You don’t even need to consider any of the surrounding facts that make this preference obvious, like Trump’s financial ties with Moscow, or the icy hostility that grew out of Clinton’s tenure as secretary of State. A handful of very well-known data points include:

1. Both Russia’s domestic and international-facing propaganda organs openly touted Trump and attacked Clinton throughout the campaign.

However, it was Hilary who signed off on giving Putin 20% of our uranium holdings for $145 million dollars to her crooked foundation which is laundered money through Canada.

For those of you who may not know, uranium is used to make nukes besides being used in medical equipment. It was her husband Bill who was paid $500,000 for a half-hour speech in Russia.

So who is the real Russian colluder now? It’s the old Stalin and Saul Alinsky rule to blame others for what you do.

PBS Host, Guest Claim Black Memphis Cops Driven by ‘Anti-Black Racism’ in Deadly Beating
‘If you need to arrest me, I understand’: US Marine allegedly flew from Louisiana to Florida to have sex with 14-year-old girl he met online
Tucker Carlson Examines The Strange Destruction Of Food Processing Plants Across The Country (VIDEO)
White Privilege Virtue-Signaling Scarborough: I Wouldn’t Have Been Beaten Like Tyre
Politico Florida bureau chief mocked for saying DeSantis team makes relationship with media ‘worse’ by sharing screenshots of reporter questions