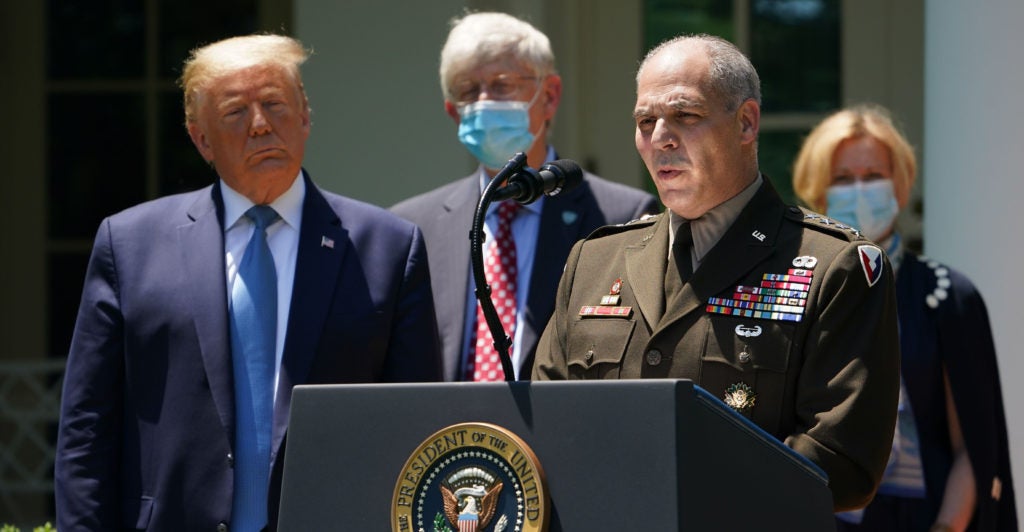 President Donald Trump on Friday announced “Operation Warp Speed,” an initiative to accelerate development of a vaccine for the coronavirus by January.

The program is a joint venture by the Department of Health and Human Services and the Defense Department, Trump said.

To lead the effort to find a vaccine against COVID-19, Trump tapped Dr. Moncef Slaoui, an immunologist and former pharmaceutical executive at GlaxoSmithKline who helped create 14 new vaccines, and Gen. Gustave Perna, the four-star commander of Army Materiel Command.

“I have very recently seen early data from a clinical trial with a coronavirus vaccine, and this data made me feel even more confident that we will be able to deliver a few hundred million doses of vaccine by the end of 2020, and we will do the best we can to do that,” Slaoui said.

“We will of course also focus on progressing and accelerating the development of medicines for those who unfortunately already caught the virus, as well as optimize the diagnostic tests,” he said.

Trump said he left it up to individuals as to whether they wanted to wear a mask.

“A massive scientific, industrial, and logistical endeavor unlike any our country has seen since the Manhattan Project,” Trump called it, referring to the U.S. project that developed the atomic bomb during World War II.

“Its objective is to finish developing and then to manufacture and distribute approved coronavirus vaccine as fast as possible,” Trump said. “Again, we’d love to see if we can do it prior to the end of the year.”

Perna also expressed optimism that teaming Pentagon and Health and Human Services experts could get results.

“One of the great advantages that we have as the military is the ability to do logistical and sustainment operations afar,” Perna said. “We are just going to apply those capabilities to this mission. This mission is about defeating the enemy. We will defeat the enemy. Why? Because winning matters.”

Health and Human Services Secretary Alex Azar said that setting a goal of achieving a vaccine by January “will be one of the great scientific and humanitarian accomplishments in human history.”

Trump said researchers have looked at more than 100 vaccine candidates, identified 14 they believe are the most promising, and are working to narrow the candidates further.

The Food and Drug Administration will expedit approval by being engaged in the development and manufacturing stages, he said.

Trump said he hopes the vaccine is manufactured in the United States, but that the U.S. is partnering with other countries and will share the vaccine.

“We have no ego when it comes to this, no ego whatsoever,” the president said.

Trump, however, seemed to concede there is a chance that Operation Warp Speed won’t be successful as quickly as officials hope:

There has never been a vaccine project anywhere in history like this, and I just want to make something clear: It’s very important. Vaccine or no vaccine, we’re back, and we’re starting the process.

And in many cases, they don’t have vaccines [for other diseases]. And a virus or flu comes and you fight through it. But what we’d like to do if we can is get the vaccine, and I think we’re going to be successful in doing it.