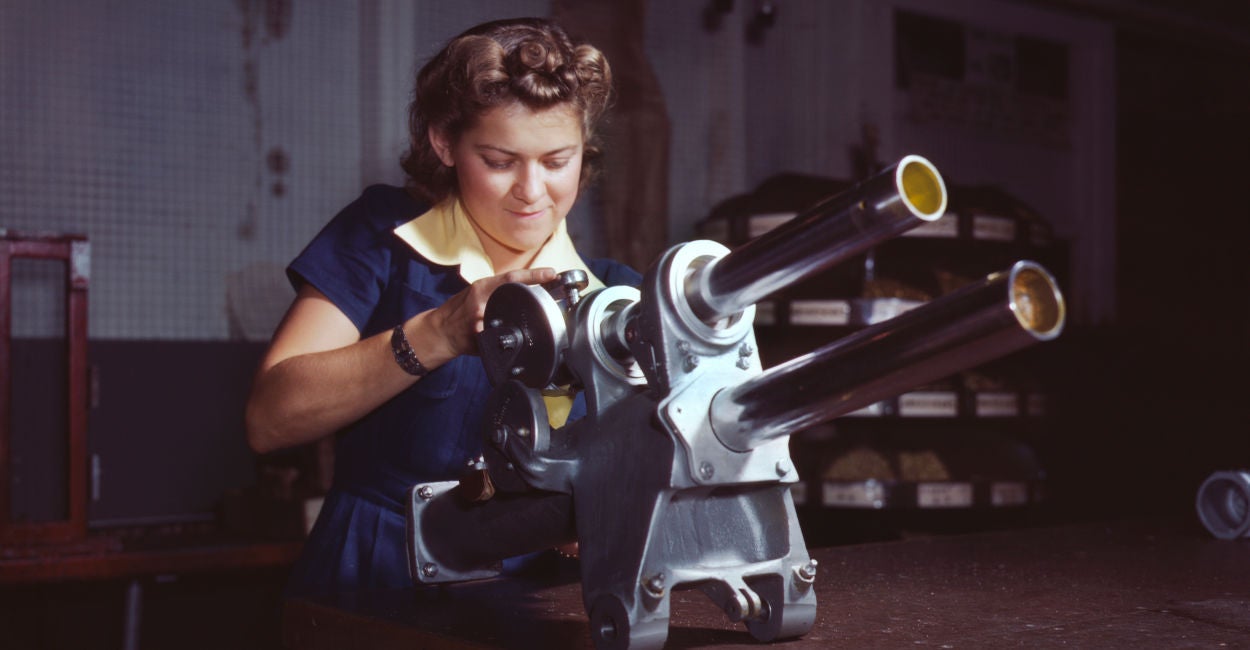 Seventy-five years ago this month, Germany surrendered, ending the European theater of World War II. At the war’s beginning, no one believed Germany would utterly collapse in May 1945.

On the morning of Dec. 7, 1941, the day of the Japanese attack on Pearl Harbor, German invaders were on the verge of capturing Moscow. Britain was isolated. London had barely survived a terrible German bombing during the Blitz.

A sleeping America was neutral, but it was beginning to realize it was weak and mostly unarmed in a scary world.

But by 1943, a booming U.S. economy was fielding vast military forces from Alaska to the Sahara. Britain and America were bombing the German heartland. The Soviet Red Army had trapped and destroyed a million-man German army at Stalingrad.

How did the Allies—Britain, the Soviet Union, and the U.S.—turn around the European war so quickly?

The huge Red Army would suffer close to 11 million deaths in halting German offensives. Britain would never give up despite terrible losses at home and at sea from German bombers, rockets, and submarines.

Yet the key to victory was the U.S. economy. It would eventually outproduce all the major economies on both sides of the war combined.

But how did the U.S. arm so quickly build such effective weapons so soon, and from almost nothing field a military some 12 million strong?

They were all given relatively free rein from New Deal strictures to work and profit without burdensome government regulations. The result was a military juggernaut that overwhelmed America’s enemies.

Politics went on, but in less partisan fashion. Republicans picked up seats in the House and Senate in 1942, while Roosevelt won a fourth presidential term in 1944.

Roosevelt was able to dodge charges of rank partisanship during the war by appointing Republicans to key positions in his administration. Republican Henry Stimson became secretary of war. Former Republican vice presidential candidate Frank Knox was the all-important secretary of the Navy. Roosevelt stocked the War Production Board with Republican capitalists.

The media turned from either propagandizing the success of the New Deal or hyping its failures to warning Americans of the looming existential threat that would soon make their differences irrelevant.

Most importantly, Americans lost their fears.

From 1929 to 1938, the U.S. economy was in ruins. FDR’s New Deal could not restore economic growth or consumer confidence. As late as 1938, economic growth had sunk to negative 3.3%. Unemployment soared to an unsustainable 19%.

Only the threat of war terrified Americans into taking a gamble—to work feverishly and to ramp up industry.

By the end 1941, the early rearmament effort had spiked gross domestic product growth to 17.7%. Unemployment had fallen to about 10% and would soon fall to about 2%.

Americans began losing their dread that they could do nothing against a decade-long depression. The less they feared the Axis powers, the more they restarted the economy and began to produce a plethora of goods and services.

After Pearl Harbor, Americans did not stay neutral, wait for government assistance, or expect other nations to protect them.

Does World War II offer any lessons regarding our wrecked economy and staggering unemployment from the lockdown reaction to the coronavirus?

Perhaps. Government cannot restore prosperity. Only entrepreneurs and risk-takers can. Americans must master their fears of the virus and dare to go back to work.

Otherwise, locked down states will continue to borrow to pay out public assistance without creating wealth from labor, production, and investment. Bankrupt states will beg the federal government to print money that it doesn’t have for bailouts to pay those who are not working and not creating collective wealth.

The media must stick to reporting on the virus and the ailing economy. Their often petty obsessions with destroying President Donald Trump are long past monotonous.

Trump himself must keep working with any Democratic governors who realize they must put their states back to work in order to have the money to pay for the fight against the virus.

Interest rates are low. Gas is as cheap as it’s been in years. Inflation remains moribund. People are tired of being housebound. They want to get back to work to make and spend money.

All that is missing is confidence—or rather, the conviction that the coronavirus is no more dangerous than were the Axis powers and can be beaten far more quickly if we show the sort of will our grandparents had.