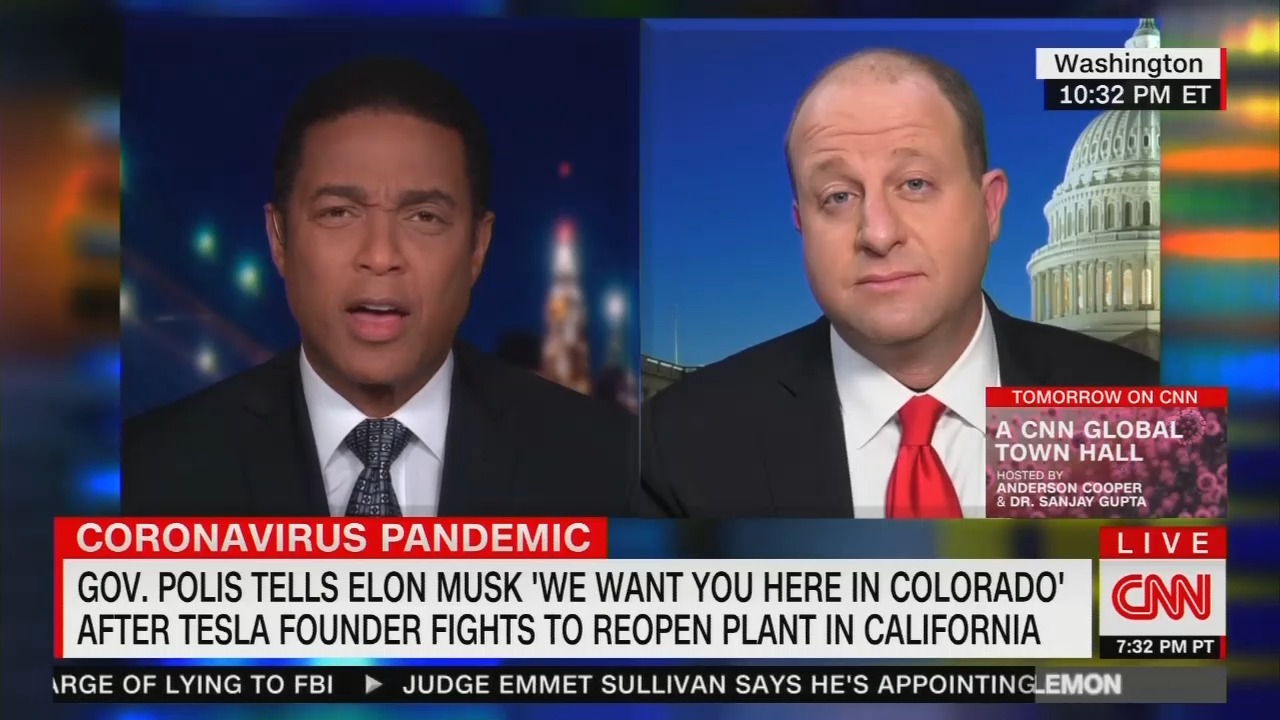 Earlier this week, Colorado Governor Jared Polis (D) had a message for Tesla founder Elon Musk, who threatened to move his company’s headquarters out of California after local health officials prevented him from reopening his factory. Taking to Twitter, Polis told Musk “we want you here.” This did not sit well with CNN Tonight Don Lemon, who scolded Polis on Wednesday night for rolling out the welcome mat for the “defiant” Musk.

Lemon admonished the liberal Democrat for inviting Musk to relocate his factory to Colorado “after he announced that he would defy orders to reopen the Tesla plant in California.” Lemon asked: “Do you want him in Colorado if he’s defying public health guidance in California?”

Polis didn’t back down, explaining that “we would be very excited if Tesla would locate in Colorado,” describing his state as “a great place to a grow a business and a great place for manufacturing.” The Democrat worked to ensure Lemon that his desire to see Tesla relocate to his state was for “the long run” because “[t]his is likely a transition that could be a year or two years.”

Lemon was not impressed: “Why would you want someone who is defying orders to…I understand the business part of it, but I mean, come on, Governor.”

He continued to chastise Polis: “You’re a governor…You’re not making a fellow governor, Gavin Newsom’s job any easier. Imagine if it was the reverse, if Governor Newsom had done the same thing you’re doing…You’d be like, hey Governor Newsom, what are you doing? Come on, man.”

Prior to scolding Polis for inviting Musk to Colorado, the conversation focused on Polis’s visit to the White House and a restaurant in Castle Rock, Colorado reopening its dining room in defiance of an order issued by the Governor.

The CNN hack tried to bait Polis into trashing President Trump: “You were in the room when the President took a swipe at Dr. Fauci. What went through your mind when you heard that?” Polis acknowledged that he “wasn’t sure exactly what he was talking about with Fauci.”

The conversation about the restaurant reopening featured the usual liberal talking points, with Lemon calling the disobedience “nuts” and Polis slamming the “foolish” behavior of the people at the restaurant; contrasting them with “the vast majority of Americans who care deeply about their own lives, the lives of their family members, and the lives of their neighbors.”

In the age of coronavirus, CNN has found a new purpose: defend lockdowns at all costs and impugn the motives of those who refuse to abide by them.

A transcript of the relevant portion of Wednesday’s CNN Tonight is below. Click “expand” to read more.

DON LEMON: President Trump publicly criticizing Dr. Fauci, calling his caution about reopening schools in the fall “not an acceptable answer.” The President accusing the country’s top infectious disease expert on wanting to…of wanting to play all sides of the equation. His comments coming during a White House meeting with Colorado Governor Jared Polis, North Dakota Governor Doug Burg…Burgum. Governor Polis joins me now. Governor, thank you so much; appreciate you joining us. I know it’s a very busy time for you. You were in the room when the President took a swipe at Dr. Fauci. What went through your mind when you heard that?

GOV. JARED POLIS (D-CO): Well, you know, the…the President, of course, invited me and Governor Burgum to the White House and I had the opportunity to share with him what’s really going on in Colorado to try to improve that partnership on products. You know, I wasn’t sure exactly what he was talking about with Fauci. I didn’t hear Fauci’s remarks until earlier. I think, Don, you know, look, the truth lies somewhere in between. We…we are all hopeful and I’m confident that schools will generally start in the fall. But it’s also likely that some districts or some schools might have outbreaks and need to close for some period of time, go to online, so it’s probably somewhere in between. I think we all share the goal of kids being able to return to their physical classrooms.

LEMON: Yeah, I…I just…it’s scary, though, to think about children getting sick and especially when you think about this…the whole Kawasaki thing, you know, and we don’t want to put it…the kids at risk. Listen, though, Governor Polis, this was over the weekend. This is a restaurant in…in Castle Rock openly defying your state order and reopened its dining room. People were…I don’t know if you…have you seen this video? People packed inside. Most were wearing…weren’t wearing masks. You shut down the restaurant and called what happened irresponsible. Does that kind of behavior make you worried that, you know, cases could spike if this sort of thing continues? I mean, gosh, this is nuts.

POLIS: You know, Don, I…I really believe in my heart that Coloradoans and Americans are, are, are better than that. We…we have to be to get through this. That…the, the type of behavior that we saw modelled there, that risky behavior, if that’s occurring on a large scale, this is going to take a turn for the worse in our entire country. I’m confident that those people who went out there and acted foolish were not representative of anywhere close to the vast majority of Americans who care deeply about their own lives, the lives of their family members, and the lives of their neighbors.

LEMON: Was that a…was that a baby I saw someone carrying? I thought…was that…was that right? I don’t…I don’t know. I thought I saw it in that video, someone holding a baby. I don’t know.

POLIS: Well, you know what I said, Don. That was, that was on, that was on Mothers’ Day, Don. And, you know, I…I, I love my mom who’s, of course, watching now. Hi, mom. I love my mom far too much to put her at risk by taking her to that kind of crazy environment. She’s 75 years old. And I…and we didn’t even visit with her physically for over a month.

LEMON: Yeah, I’m still not visiting with my mom…so, who’s over 70. Don’t tell her I said that. She will get mad at me for saying…telling her age. Just slightly though. So, listen, you tweeted at Elon Musk; telling the Tesla founder to come to Colorado after he announced that he would defy orders to reopen the Tesla plant in California. Do you want him in Colorado if he’s defying public health guidance in California?

POLIS: Yeah, you know, we…one of the first…the very first action I took as Governor was implementing electric vehicle standards. We are one of the highest states in electric vehicle usage. We would love to have alongside that electric vehicle manufacturing. Of course, all of the businesses in our state need to follow the public…valid public health orders. But, of course, this is for the long run. This is likely a transition that could be a year or two years. We would be very excited if Tesla would locate in Colorado. We work with all of our businesses to be a great place to grow a business and great place for manufacturing.

LEMON: Why would you want someone who is defying orders to…I mean, listen, I understand the business part of it, but I mean, come on, Governor.

POLIS: Well, nobody can defy orders in our state, but we pride ourselves in working with businesses across the board. In fact, the restaurants in our state have been open through this entire health care health crisis. They’ve been doing delivery, takeout, curbside.

POLIS: They just haven’t been able to do…

LEMON: All I’m saying is…

POLIS: We also work with our manufacturers…

LEMON: I know. I get that. You’re a governor. That doesn’t make…you’re not making a fellow Governor, Gavin Newsom’s job any easier. Imagine if the…if it was the reverse, if Gavin Newsom had done the same thing. You’d be like, hey…

LEMON: …Governor Newsom, what are you doing? Come on, man.

POLIS: You know what, at the end of the day, Don, we want good jobs for Colorado and I know Gavin wants the same for California. A few thousand jobs is an opportunity that I’m not going to shy away from. We…we’d love to have him here.

‘Spy balloon’ spotted over Latin America is for ‘civilian usage’, China says
What The Media Won’t Tell You: The Squad, Race And Anti-Semitism
Less than half of Democrats want Biden to run in 2024: Poll
Lawsuit: Did the US Postal Service Share Private Customer Information With Unions?
Ticketmaster braces for Beyoncé’s ‘Renaissance’ tour amid fears of Taylor Swift-level demand