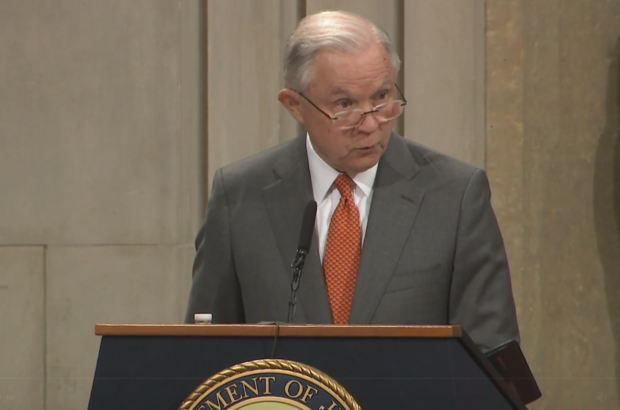 Former Attorney General Jeff Sessions said Friday that the leak of Michael Flynn’s identity to the media in 2017 was “an absolute crime” that should be “prosecuted vigorously.”

In an interview on Fox Business, Sessions, who is running for a Senate seat in Alabama, discussed revelations about Obama administration officials unmasking Flynn’s identity in foreign intelligence reports during the presidential transition period in 2016 and 2017.

Republicans have focused on the Flynn unmaskings because of a leak to The Washington Post in early January 2017 regarding Flynn’s phone calls with Sergey Kislyak, who served as Russia’s ambassador to the U.S.

On Jan. 12, 2017, Post columnist David Ignatius published a story citing a senior U.S. government official who disclosed that Flynn spoke by phone with Kislyak. The information was seemingly classified since it was derived from a transcript of the Flynn-Kislyak phone call monitored by the National Security Agency.

“It’s one thing to ask for an unmasking. It’s another thing to leak it to the media. That’s an absolute crime and should be prosecuted vigorously,” Sessions said Friday.

Sessions asserted that whoever was behind the Flynn leak should be charged and jailed for illegally disclosing classified information, which carries a maximum 10-year prison sentence.

“If that happened, and it looks like it might have, those people need to go to jail. They need to be prosecuted,” said Sessions.

Andrew McCabe, who served as deputy director of the FBI, opened an investigation into whether Sessions lied to Congress about contacts he had in 2016 with Kislyak.

The special counsel ultimately cleared Sessions of any wrongdoing.

The Sessions campaign did not respond to a request for comment about whether Sessions approved any investigations into the Flynn leak.

“So when you have Joe Biden having these intercepts a few days before he left office, he had no basis and need for that from a national security perspective whatsoever,” said Sessions.