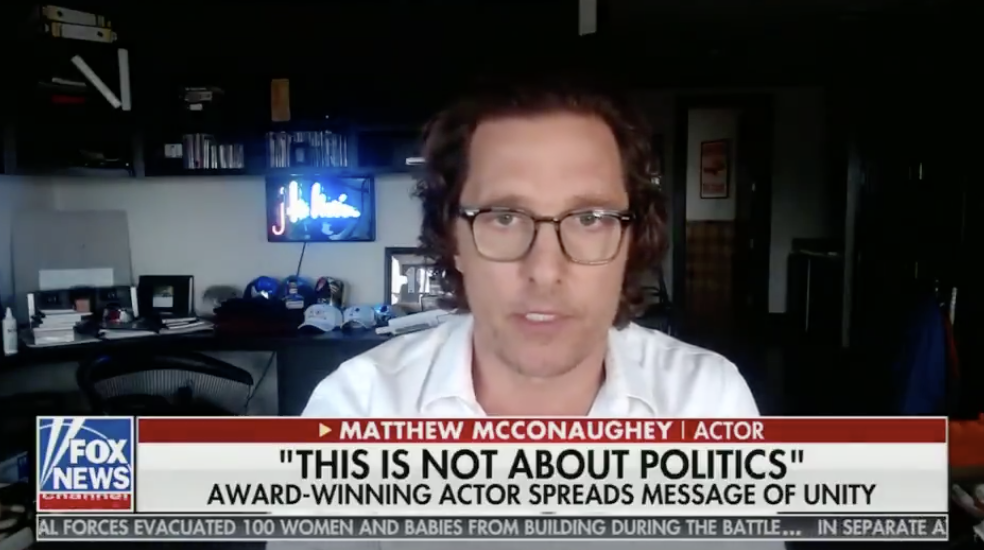 Not all Hollywood stars are partisan hacks. Some, like Matthew McConaughey, want to see a brighter future for all Americans, regardless of their political affiliation.

The Hollywood A-lister appeared on a May 12 segment of the Fox News Channels Special Report with Bret Baier to urge political unity between Americans in order to defeat the virus. Through his charity foundation, Just Keep Livin’, McConaughey has been sharing a message of unity amidst the pandemic and Fox News invited him to share that message with its viewers. He urged Americans to wake up and realize they’ve been losing their focus on the larger war with coronavirus because of nasty politics.

Our “united purpose,” the Oscar winner explained, “got hijacked.”

“I’ve been trying to keep my pulse on what’s the message, you know, right now as we go through this pandemic,” McConaughey told the anchor. “We started off at ‘Stay at home,’ then it turned into ‘wear a mask’ and uh, you know, a few weeks ago — about a month ago — I could feel that this united purpose we all have as Americans to beat this enemy and this virus, that purpose got hijacked a bit by partisan politics.”

McConaughey is right to point out that the nature of our coronavirus response has changed. Folks have become increasingly divided on the issue of re-opening the economy. One set of folks believe that lockdowns and stringent precautions are overkill, some of whom have taken to protesting what they view as an infringement of their rights, while another set remains adamant that longer lockdowns and more precautions are necessary to keep everyone safe.

“Now even the mask wearing is getting politicized,” McConaughey lamented. “If you want to wear a mask, you wear a mask, you’re a liberal, if you don’t, then you’re a conservative, and that’s just not true.”

McConaughey expressed his opinion that these petty arguments have contributed to a “false divide.” Not only is there a war on coronavirus but a war with ourselves. “If we try to fight both those wars, we’re gonna lose both of them,” he affirmed.

Baier then asked what the message to get us all on the same page again should be, to which McConaughey responded, “This should not be about politics, it’s about us. The U.S.A. And we gotta take care of each other right now. We have a collective purpose… And look at how great Americans are when purpose comes to us in a crisis.”