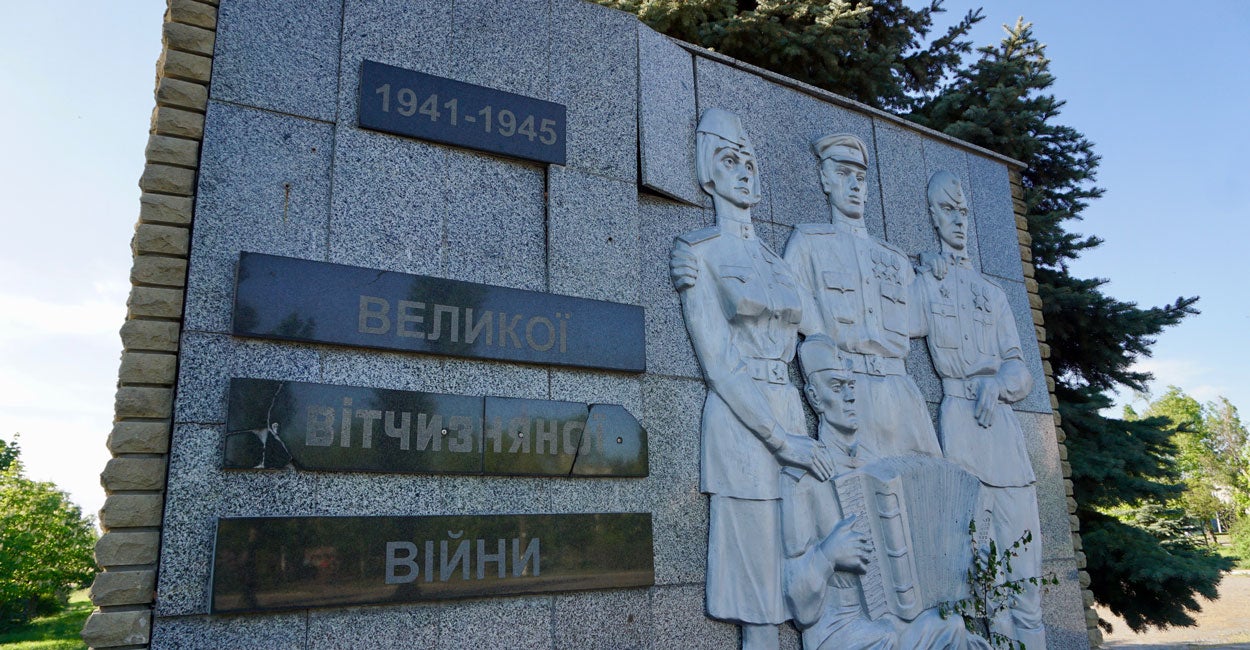 Along with Europe and the United States,
Ukraine on Friday marked the 75th anniversary of the surrender of Nazi Germany
—a day earlier than in Russia, where “Victory Day” is celebrated on May 9,
according to Soviet tradition.

Nazi Germany initially surrendered to the
Allies in the French city of Reims on May 7, 1945. A second, formal surrender
ceremony was held in Berlin late in the evening of May 8—already after midnight
on May 9 in Moscow.

Thereafter, Western European countries and the United States celebrated Victory in Europe Day, or V-E Day, on May 8. The Soviet Union, however, traditionally celebrated the end of the “Great Patriotic War” on May 9.

In Ukraine today, celebrating the end of World War II is a balance
between honoring the country’s Soviet past while proclaiming its pro-Western
future, free from Russian overlordship at last.

Ukrainian President Volodymyr Zelenskyy marked the holiday
Friday by visiting a village near the border with Russia in Ukraine’s war-torn
eastern Donbas region, where Ukrainian soldiers have fought a war since 2014 to
hold a Russian invasion force at bay.

In the village of Milove, Zelenskyy laid a wreath at a war
memorial.

“Today, our courageous boys and girls are defending the
Ukrainian nation, our sovereignty and integrity … [they fight] for the peace
that we need so much; for the prosperity of an independent Ukraine; for the
next generations,” Zelenskyy said in a recorded address.

In 2015, one year after Russia invaded,
Ukraine’s then-president, Petro Poroshenko, announced that Ukraine would
celebrate the “Day of Remembrance and
Reconciliation” on May 8, as well as Victory Day on May 9.  Ukraine also
officially renamed the conflict the “Second World War,” rather than the Great
Patriotic War—the carryover name from the Soviet era, still used in Russia.

After six years, the war in eastern Ukraine goes on. About 14,000 Ukrainians have died in the conflict—more than half that number have died since the Minsk II cease-fire went into effect in February 2015.

Despite their common history of fighting alongside Russians
under the Soviet flag in World War II, many Ukrainians now see the Soviet era
as one of oppression and occupation under Moscow’s rule. Ukrainians also don’t
forget that it was Soviet leader Josef Stalin who ordered the mass famine in
the 1930s, known as the Holodomor, which killed some 7 million Ukrainians.

In the eyes of many, the war in the Donbas is another chapter in
Ukraine’s larger, multigenerational struggle to free itself from Russian
oppression.

The mayor of Berlin invited the ambassadors to Germany from
Ukraine, Russia, and Belarus to lay a wreath jointly on May 2 in honor of the
end of World War II.

“Not even in my worst nightmare could I imagine laying
wreaths alongside a representative of the country that has for more than six
years been cynically waging a bloody war in eastern Ukraine,” said Andrij
Melnyk, Ukraine’s ambassador to Germany. “In defiance of international
law, Russia has annexed the Crimean Peninsula and occupied a large part of
Donbas.”

Melnyk went on to call for a dedicated monument in Berlin to honor
Ukrainians killed in World War II.

In a 2010 interview, Russian President Vladimir
Putin downplayed Ukraine’s contribution to the Soviet Union’s overall war
effort against the Nazis.

“We would definitely have won without Ukraine
as a member of the USSR, because we are the winner state,” Putin said.

Some claim Russia has co-opted the legacy of
the Soviet Union’s collective sacrifice in World War II—thereby overlooking the
fact that 16 separate countries made up the Soviet Union. And some of those
countries bore disproportionately greater losses in the conflict than did
Russia.

Of the 41.7 million people living in the Ukrainian Soviet Socialist Republic before the war, 27.4 million were left in 1945. Ukraine’s total demographic loss during the war—including those who were killed, evacuated, deported, and forced into slave labor—was the largest of any other country in the European theater of the war, according to the Institute of History of the National Academy of Sciences of Ukraine.

Of the Soviet Union’s estimated 26.7 million war dead, about 40%—roughly 10 million—may have come from Ukraine alone, according to Ukrainian historians. Among Soviet states, Ukraine’s proportional losses were second only to Belarus, which lost some 25% of its population in the war. About 12.7% of Russia’s 1940 population were killed.

Altogether, Ukrainian soldiers made up about
25% of the Red Army’s ranks. Ukraine also played an outsize role in its
industrial contribution to the Soviet Union’s war effort.

About 60% of the Soviet Union’s coal, 67.6% of
its iron, and 43% of its electricity came from the Ukrainian Soviet Socialist Republic, according to the
Institute of History.

In World War II, Ukraine was the deadliest battlefield of the
deadliest war in human history. The war destroyed 720 Ukrainian cities and towns and 28,000
villages. Ukraine also
suffered about 40% of the Soviet Union’s total economic losses during the
conflict, according to data from the Ukraine Crisis Media Center.

No matter the numbers, however, it’s clear that the Soviet Union
as a whole suffered unfathomably horrible casualties in World War II.
It’s also clear that no one country has a monopoly on the legacy of that
suffering. The Soviet Union included 16 separate countries, and they all paid a
heavy human price for victory.

“We call on Russia to stop making self-aggrandizing claims based
on purposeful misrepresentations of history,” James
S. Gilmore, U.S. ambassador to the Organization for Security and Cooperation in
Europe, said Thursday.

“We stand in solidarity with our European partners against
Russia’s falsification of history,” Gilmore
said.

During Putin’s presidency, Victory Day has
become a much more important holiday in Russia than it ever was during the
Soviet era.

In the postwar years, Stalin played down the day’s significance, fearing that too much celebration could spur independence movements in Soviet countries. It wasn’t until 1965 that Soviet Premier Leonid Brezhnev—a major general in the Red Army during World War II—made May 9 an official holiday and held a parade in Red Square to commemorate the end of the war. The next Victory Day parade wasn’t held until 1985.

In 1990 the Soviet Union held its last May 9
parade. The next one wasn’t until 1995, when Moscow was simply the capital of
the Russian Federation, no longer of the Soviet Union.

Putin reshaped Victory Day into what it is
today—an annual spectacle featuring foreign dignitaries, fighter jet flyovers,
and processions of troops and tanks and mobile rocket launchers. A celebration
of Russian nationalism, contemporary Victory Day parades proclaim to the
Russian people—and the world—that Russia, above all other nations, played the
most significant role in defeating the Nazis.

“[The Nazis] thought
they would also be able to conquer the Soviet Union within several weeks—the
thousand-year-old historic Russia. They failed,” Putin said in a speech last
year on Red Square to mark the Victory Day parade.

“Yes,
after the enemy’s treacherous attack on our territory we suffered defeats,
retreats, and heavy losses, but it did not break Russia‘s spirit,” Putin said.

A 2019 poll by the Levada Center, an independent Russian think tank, found that 87% of Russians named the Soviet victory in World War II as the event in their country’s history of which they were proudest.

In second place, at 50%, was the Soviet space
program. In third place, some 45% of respondents named Russia’s 2014 invasion
and seizure of Crimea from Ukraine as among their country’s most noteworthy
historic achievements—the first exclusively Russian, rather than Soviet,
historical event on the list.

This year’s historic Victory Day parade in
Moscow was slated to be a marquis event. But Putin announced in April that he
was postponing the parade until later this year due to the coronavirus
pandemic. Kyiv, too, canceled public celebrations to mark the 75th anniversary
of the war’s end.

“I understand that many people congratulated veterans on
this day, brought flowers to the monuments or went to cemeteries to the graves
of their relatives,” Kyiv Mayor Vitali Klitschko said.  “But this year the
format will be different. Therefore, you can congratulate veterans by calling
them. Remember your loved ones and share their stories on social networks.”

In 2015, due to the war in the Donbas, Ukraine kick-started its
cultural divorce from Russia by passing a series of so-called decommunization
laws. The new measures effectively outlawed all vestiges of Ukraine’s Soviet
past. The laws prohibit displaying the Soviet hammer-and-sickle flag or playing
the Soviet national anthem.

All remaining statues of Vladimir Lenin have come down. And any
city, town, village, or street that once bore a Soviet name now has a new one.

The town of Komsomolsk, for example, was renamed Horishni Plavni
in 2016 as part of the decommunization laws. Horishni Plavni roughly translates
from Ukrainian to English as “upper marshes,” the name of the area’s original
village.

Youth volunteers founded the town in 1960 as a place to live for
workers in the nearby iron ore mines. The original name, Komsomolsk, referred
to the All-Union Leninist Young Communist League, or Komsomol.

Despite the decommunization laws, the Victory Day holiday on May 9 is simply too deeply ingrained in Ukraine’s cultural fabric to be erased as easily as a name can be changed or a statue of Lenin can be torn down.

In Horishni Plavni there is a memorial with an eternal flame to
memorialize World War II deaths. Every May 9—Soviet Victory Day—schoolchildren
gather at the site to honor the dead. That day, children also traditionally
pool money to buy gifts of food and flowers for World War II veterans.
Following a Soviet tradition, the flowers given to veterans are exclusively
light red carnations.

An April poll by the Ilko Kucheriv Democratic Initiatives
Foundation, a Ukrainian think tank, found that some 39% of Ukrainians support
celebrating both Remembrance and Reconciliation Day on
May 8 as well as Victory Day on May 9.

According to that same poll, 32% of Ukrainians said only the May 9
holiday should be celebrated.

Russia commemorates the Great Patriotic War as having lasted
from 1941 to 1945—the period from the Nazi invasion of the Soviet Union in 1941
until the Nazis’ surrender in 1945.

Many war memorials in Ukraine, built during the Soviet era, still bear the dates 1941 to 1945. Yet, officially, Ukraine now marks the war’s beginning as 1939, the year when Nazi Germany and the Soviet Union joined forces in invading Poland.

The Soviet Union went on to invade Finland in 1939, starting the
so-called Winter War. Nazi Germany invaded France in 1940, and the Luftwaffe
and the Royal Air Force fought over the skies of the United Kingdom in the 1940
Battle of Britain.

It wasn’t until 1941 that Hitler unleashed the largest land
invasion force in history by invading the Soviet Union in Operation Barbarossa.

Today, 56% of Ukrainians agree that both the
Soviet Union and Nazi Germany were responsible for starting World War II, according to polling by the Ilko Kucheriv Democratic Initiatives
Foundation.

Gilmore, the U.S. ambassador to the OSCE, said:

While the Soviet Union’s military and civilian population made tremendous sacrifices to defeat the Nazis, as our Russian colleague has reminded us today—and we honor those sacrifices entirely and completely—we should also not forget that the Second World War began in 1939, when Stalin and Hitler aligned through a pact that divided Eastern Europe into Soviet- and Nazi-controlled zones.