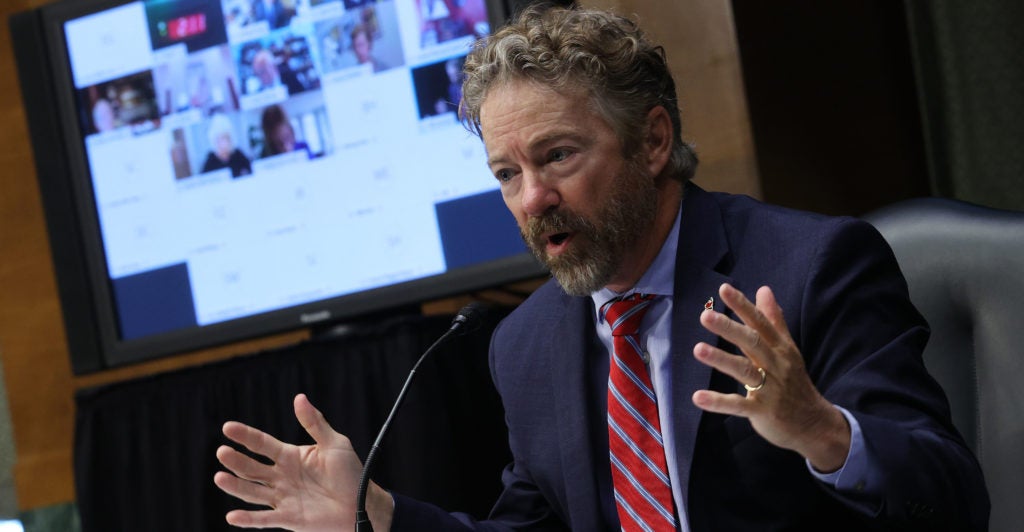 In one of the most unusual Senate hearings in U.S. history, top Trump administration health officials testified remotely Tuesday from their homes and offices to senators who also mostly were at home.

Here are six big moments from the hearing on the federal government’s response to the coronavirus pandemic held via video by the Senate Health, Education, Labor and Pension Committee.

Dr. Anthony Fauci, director of the National Institute of Allergy and Infectious Diseases, warned senators that if the U.S. economy is not reopened with proper precautions, the new coronavirus could come roaring back in the fall.

“If we do not respond in an adequate way when the fall comes, given that it is without a doubt that there will be infections that will be in the community, then we run the risk of having a resurgence,” Fauci testified.

“I would hope that by that time, in the fall, that we would have more than enough to respond adequately,” he said, “but if we don’t, there will be problems.”

States should not be flouting the Trump administration’s guidelines for a phased reopening across the nation, Fauci said.

“What I’ve expressed then and again is my concern that if some areas, cities, states, or what have you jump over those various checkpoints and prematurely open up without having the capability of being able to respond effectively and efficiently — my concern is that we will start to see little spikes [of COVID-19 cases] that might turn into outbreaks,” Fauci told the Senate committee.

Fauci did not call out specific states or governors.

Colorado Gov. Jared Polis, a Democrat, and Georgia Gov. Brian Kemp, a Republican, are among the least restrictive, allowing the reopening of salons and other businesses that might be more prone to spread germs. Both states opened up again before April 30, the earliest suggested by the Trump administration.

Sen. Rand Paul, one of the senators actually present in the hearing room, got into a respectful verbal tussle with Fauci as the Kentucky Republican referred to studies suggesting that patients who recovered from COVID-19 had built up immunity.

“I think we ought to have a little bit of humility in our belief that we know what’s best for the economy,” Paul said, adding:

Fauci responded that he was aware of the limits to his expertise.

“I have never made myself out to be the end-all and only voice in this,” Fauci  said. “I’m a scientist, a physician, and a public health official. I give advice [based] on the best scientific evidence.”

Sen. Bernie Sanders, I-Vt., however, suggested it is much higher.

“The official statistic, Dr. Fauci, is that 80,000 Americans have died from the pandemic,” Sanders said. “There are some epidemiologists who suggest the number may be 50% higher than that. What do you think?

Fauci said the number likely isn’t that much higher, but guessed it’s higher than the official estimate.

“I’m not sure, Senator Sanders, if it’s going to be 50% higher,” Fauci said. “But most of us feel that the number of deaths are likely higher than that number, because given the situation, particularly in New York City, when they were really strapped with a very serious challenge to their health care system, that there may have been people who died at home who did have COVID who are not counted as COVID because they never really got to the hospital.”

“So, in direct answer to your question,” he told Sanders, “I think you are correct that the number is likely higher. I don’t know what percent higher, but almost certainly it’s higher.”

Sen. Chris Murphy, D-Conn., pressed Dr. Robert Redfield, director of the Centers for Disease Control and Prevention, about when the CDC would release specific guidelines for schools to open in the fall.

The CDC guidelines are supposed to be far more detailed than what was released by the White House’s coronavirus task force.

“Guidances that you’ve talked about have gone through that interagency review,” Redfield said. “Their comments have come back to CDC, and I anticipate they’ll go back up into the task force for final review.”

He added: “I do anticipate this broader guidance, though, [will] be posted on the CDC website soon.”

This answer wasn’t good enough for Murphy, who went on to attack President Donald Trump.

“I worry that you’re trying to have it both ways,” the Connecticut Democrat added. “You say that states should not open too early, but then you don’t give us the resources to succeed. You work for a president who is, frankly, undermining our efforts to comply with the guidelines that you have given us.”

5. Reopening Colleges in the Fall

Committee Chairman Lamar Alexander, R-Tenn., a former president of the University of Tennessee, talked about the need not only for Americans to return to work, but for colleges to reopen in the fall.

“There is not enough money available to help all those hurt by a closed economy,” Alexander said. “All roads back to work, back to school, lead through testing, tracking, isolation, treatment, and vaccines. This requires widespread testing–millions more testing created mostly by new technologies to identify those who are sick, who have been exposed, so they can be quarantined [and] by containing the disease in this way, give the rest of America enough confidence to go back to work and school.”

On the heels of Trump’s announcing that testing for COVID-19 would reach 300,000 per day in May, with about 10 million tested by the end of the week, the Tennessee Republican said there still is not enough testing.

“In the near term, to help make sure those 31,000 UT students and faculty members show up in August, we need widespread testing,” he said.

In a question to Fauci, Alexander noted a conversation he had with a chancellor for a Tennessee university about reopening in the fall. In response, Fauci didn’t sound optimistic.

“Well, I would be very realistic with the chancellor and tell … her that in this case that the idea of having treatments available or a vaccine to facilitate the reentry of students into the fall term would be something that would be a bit of a bridge too far,” Fauci said.

Sen. Mitt Romney, R-Utah, said the Trump administration has “nothing to celebrate whatsoever” in the expansion of coronavirus testing.

“Yesterday, you celebrated that we had done more tests and more tests per capita even than South Korea,” Romney told the officials. “But you ignored the fact that they accomplished theirs at the beginning of the outbreak, while we treaded water during February and March.”

The hearing’s high note perhaps came when Fauci, in a response to Romney, predicted that a vaccine could be ready within the next one or two years.

“Given our history with vaccine creation for other coronaviruses, how likely is it?” Romney asked, adding: “Is it extremely likely we are going to get a vaccine within a year or two? Is it more likely than not? Or, is it kind of a long shot?”

Fauci picked the middle answer, but explained in a scientific manner that nevertheless presented hope.

“It’s definitely not a long shot, Sen. Romney. I would think that it’s more likely than not that we will,” Fauci said. “This is a virus that uses an immune response and people recover.”

The immunologist went on to explain:

The overwhelming majority of people recover from this virus. Although there is a morbidity and mortality at a level in certain populations, the very fact that the body is capable of spontaneously clearing the virus tells me that at least from a conceptual standpoint, we can stimulate the body with a vaccine that would induce a similar response.

Although there is no guarantee, I think it clearly is more likely than not that sometime within that time frame, we will get a vaccine for this virus.