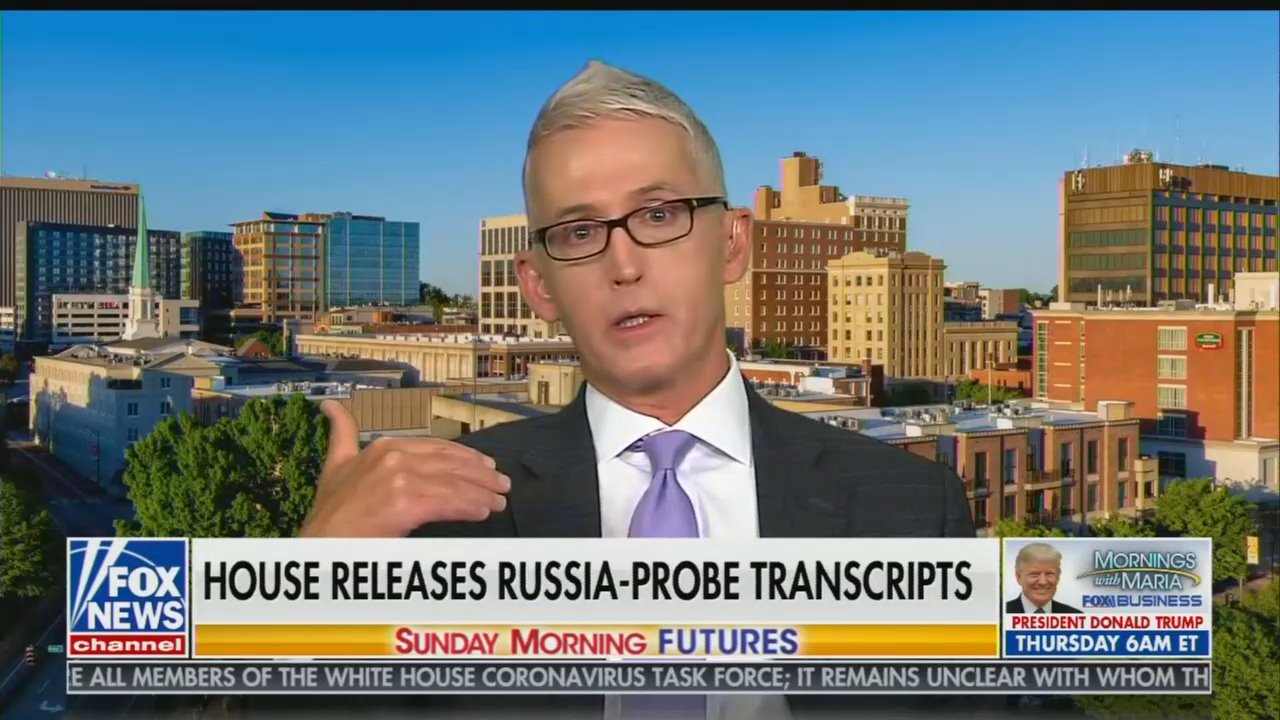 On the Fox News interview show Sunday Morning Futures, former Congressman Trey Gowdy named names of reporters who do the bidding of Adam Schiff as he prosecutes President Trump.

Fox host Maria Bartiromo wrapped up by saying “You talk about the media having culpability as well. Name some names of those reporters out there, those media institutions that helped Adam Schiff peddle this in plain sight — collusion nonsense that he said for three years.”

Gowdy replied: “I hope you have a three-hour show.”

“Let’s just start with Politico and anyone not named Rachel Bade,” said Gowdy. “She was the only reporter that I dealt with that was fair. Kyle Cheney is just an acolyte for Adam Schiff.”

Then, “Manu Raju from CNN. Nothing Schiff wanted out, made public — no leak was too low for Manu Raju and CNN,” he said.

Remember when Senator McSally called Manu Raju a “hack,” and the media erupted in outrage?

“Fill in the blank at The New York Times,” Gowdy added as the music swelled and time ran out.

Earlier, Bartiromo talked about people who leaked classified information, which could be a felony with ten years of prison time. “We know Jim Comey leaked. He leaked to his friend the professor, he wanted a special counsel. We know that Peter Strzok leaked. Are these people facing 10-year felonies?”

Gowdy replied “I think Comey’s been cleared which is also what I find ironic. You know, The New York Times wrote this scathing editorial about Bill Barr. That’s the same Bill Barr that said we’re not going to charge Jim Comey and Andy McCabe, and Peter Strzok’s has not been charged with a crime. So you can’t hate bill Barr when he does the right thing for Michael Flynn, and then not comment when he does that for Comey, McCabe and Strzok. I mean, It’s the same bill Barr. You know, you can’t just pick and choose when you respect him.”

Obviously, The New York Times can shamelessly pick and choose when to respect people, and does.

‘These cops were blue before they were black’: Ana Navarro of ‘The View’ downplays race of black police officers charged with murdering black man Tyre Nichols
We Are Not ‘At the Brink of World War III’ — At Least Not Yet
Alec Baldwin charged with involuntary manslaughter over fatal shooting on Rust film set
The Fringe with Megan Fox, Episode 118: Tech Neck. We All Have It. Now What?
Would Kari Lake Make a Good Running Mate for Trump?