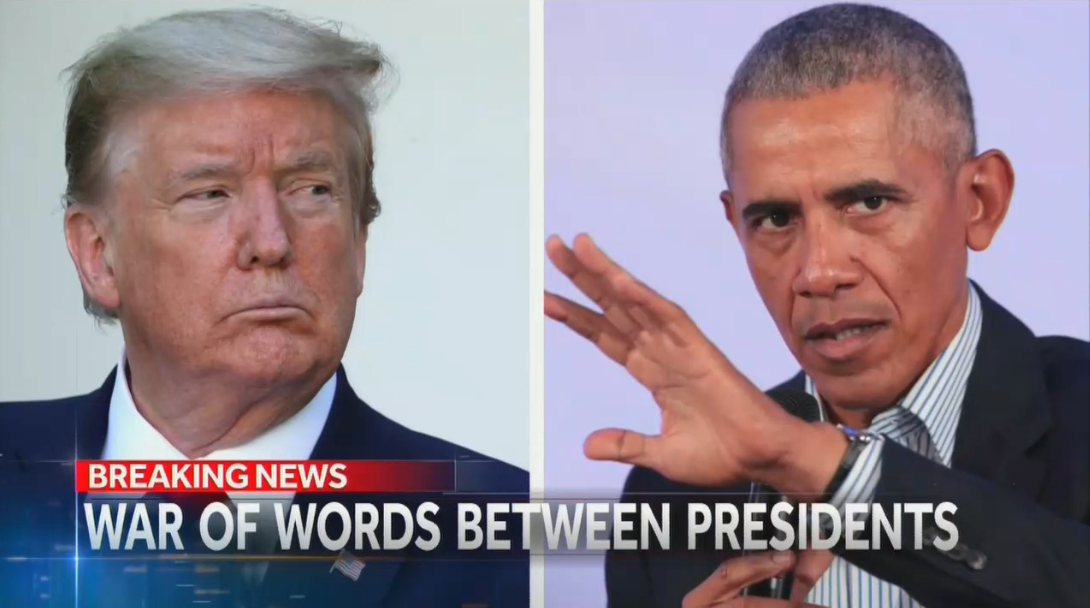 On Friday, audio of former President Barack Obama blasting the Trump administration’s coronavirus response during a phone call trying to drum up support for the Biden campaign was leaked to Yahoo News. Over the weekend and through Monday morning, the three broadcast networks repeatedly hyped the nasty, partisan attack without one word of criticism for Obama’s unseemly rhetoric.

“The war of words between presidents. The leaked audio from President Obama on the handling of the coronavirus,” anchor Jose Diaz-Balart declared at the top of Saturday’s NBC Nightly News. Minutes later, he proclaimed: “For the first time we are hearing President Obama’s view on his successor’s handling of the coronavirus crisis….He calls the administration’s response an ‘absolute chaotic disaster.’”

In the report that followed, correspondent Kelly O’Donnell announced: “Barack Obama stepping out of private life with a now very public critique of his successor’s pandemic performance.” A soundbite ran of the former president ranting to a group of his former staffers that the Trump administration response “has been an absolute chaotic disaster.”

O’Donnell touted: “That scorching assessment came during a Friday night phone conference with about 3,000 members of the Obama Alumni Association to encourage them to get active helping Joe Biden’s candidacy.”

Another clip ran of Obama hurling attacks: “Being selfish, being tribal, being divided, it’s part of the reason why the response to this global crisis has been so anemic and spotty.”

The segment only briefly noted push-back from the administration: “Tonight the White House responded: ‘There has been bipartisan recognition of President Trump’s leadership, and the American people have taken notice.’”

CHUCK TODD: When we come back –

TODD: Former President Obama’s harsh words for President Trump’s handling of the coronavirus. The panel is next.

On Monday’s Today show, correspondent Geoff Bennett told viewers: “…former President Barack Obama is speaking out about the Trump administration’s handling of the pandemic.” Followed by yet another soundbite of tirade.

“The new headline involving former President Obama. After largely staying on the sidelines during this pandemic, the new audio obtained as he slams the Trump administration’s coronavirus response, calling it an ‘absolute chaotic disaster,’” anchor Tom Llamas promoted as he began ABC’s World News Tonight on Saturday.

Introducing a report on the development minutes later, he enthused: “There is a new headline tonight involving former President Obama. Heard in a leaked audio recording blasting the Trump administration for its coronavirus response.” Correspondent Andrew Dymburt marveled: “Tonight, a rare rebuke from former President Barack Obama, condemning the White House for its, quote, ‘anemic and spotty response’ to the coronavirus pandemic.”

On Sunday’s Good Morning America, correspondent Rachel Scott highlighted: “Now former President Barack Obama is condemning the White House’s handling of the pandemic during a call with staffers.” Later in the show, co-host Dan Harris brought up the topic during a discussion with political analyst Matthew Dowd and wondered if Obama’s attack would help or hurt the Biden campaign. Dowd argued “it’s a two-edged sword”:

Barack Obama is the most popular Democrat in the country, so it’s a benefit to the Vice President that he gets involved. There are also many people that look back at the Obama presidency fondly in the midst of this, in which Biden served as vice president. But he has to be careful because he needs to stand on his own. The people of the country don’t want to go back to something, they want to go forward in that.

However, there was no concern about Obama or Biden trying to exploit a global health crisis for political gain in an election year.

On This Week later that morning, host George Stephanopoulos prodded White House economic advisor Larry Kudlow to respond to the former president: “We have now heard from President Obama – former President Obama for the first time on his take on how the White House has responded to this crisis, let’s listen….Your response?”

Unlike any of the network journalists, Kudlow called out Obama for trying to politicize the pandemic:

With all due to respect the former President, I really don’t want to get into a political back and forth here, I just – I don’t know what he’s talking about. I mean, with all the assistance we’ve done, with all the infrastructure that we, the Trump administration, working with governors and mayors, and with Congress, with respect to testing, with respect to all manner of PPE medical equipment, with respect to ventilators….I don’t understand what President Obama is saying. It just sounds so darn political to me.

On Saturday evening’s CBS Weekend News, anchor Debby Knox hyped: “President Trump has pushed for the country to reopen and instead found the coronavirus spreading inside the White House. This as former President Obama blasts Mr. Trump’s virus response as a, quote, ‘chaotic disaster.’” Correspondent Nikole Killion then gushed that Obama “leveled some of his harshest criticism yet about the Trump administration’s pandemic response.”

During a tease at the start of Sunday’s Face the Nation, host Margaret Brennan used the Obama statement to scold Trump:

MARGARET BRENNAN: That type of wishful thinking drew a rare rebuke from the President’s predecessor. In a recording obtained by Yahoo News, former President Obama called the response “anemic and spotty.”

The subject was again raised on Monday’s CBS This Morning, with correspondent Weija Jiang using similar language: “While President Trump continues to praise the federal response to the pandemic, his predecessor, former President Barack Obama, offered a rare rebuke.” The reporter then vaguely alluded to push-back: “Those remarks may explain a late-night Twitter spree by President trump with many retweets critical of former President Obama.” Of course none of that criticism of Obama was actually shown to viewers.

While the media have freaked out whenever Trump has criticized Democratic governors in the midst of the pandemic, reporters don’t bat an eye when Obama does the same thing to his White House successor.

NewsBusters Podcast: Kevin McCarthy and Jim Jordan School Sunday Hosts
Trump’s Plan to End ‘Left-wing Gender Insanity’ Is One We Can All Get Behind
Tax Dollars Are Wasted Building Electric Vehicle Charging Stations in Cold Climates
Would Kari Lake Make a Good Running Mate for Trump?
Joe Biden to End Covid-19 Emergency Declarations on May 11