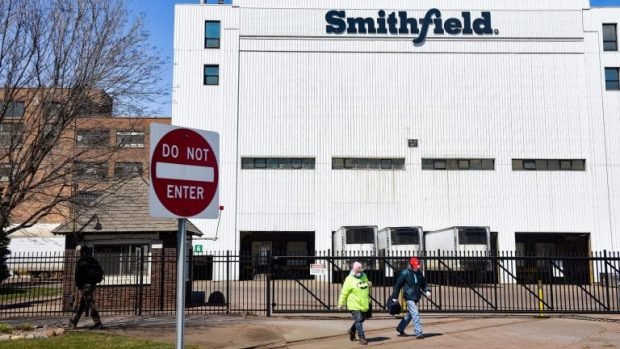 Meat processing plants are slowly coming back online after health officials shut them down, yet there is still disagreement over whether the new safety precautions are different than those the plants employed before the closures.

Processing facilities and health officials deep cleaned, sanitized and placed plastic dividers between workstations to help prevent future coronavirus infections, according to Sarah Little, vice president of communications for the North American Meat Institute. She told the Daily Caller News Foundation that the measures are similar to what plants were doing before they closed.

Processing plants are “implementing CDC/OSHA Guidelines. But they were doing that before the guidelines even came out,” Little said, referring to the Centers for Disease Control and Prevention guidelines plant owners were given after a rash of closings due to virus infections.

More than 238 Smithfield Foods employees at a plant in South Dakota, for instance, had active cases of the virus before the facility was temporarily closed. South Dakota Gov. Kristi Noem recommended in April that the company close its doors for two weeks after health officials began raising alarms. The plant in her state employs about 3,700 workers.

Tyson Foods, another major processor, also experienced a spat of infections at a plant in Iowa, forcing closures.

More than 1,000 workers at the Waterloo, Iowa plant, which employs 2,800 people, tested positive for coronavirus, or COVID-19, equaling 37% of the plant’s workforce, according to state officials. The virus originated in central China before hopping across the world, killing more than 271,000 people worldwide.

Tyson spokesman Gary Mickelson confirmed to the DCNF that the Iowa plant is back online as of Thursday.

The Waterloo plant reopened Thursday amid the turmoil. Even so, the country still has hemmeraged about 38% of its total pork processing capacity, according to Steve Meyer, an economist at Kerns and Associates in Ames, Iowa. The lack of production prompted Costco, Hy-Vee, and Walmart’s Sam’s Clubs to limit how much meat customers can purchase.

Workers in Waterloo will undergo a wellness screening before each shift, as well as repeated temperature checks, and be required to wear face masks, Tyson said. The company is also hiring so-called social distance monitors who will help maintain safety precautions.

“It has allowed everyone more ability to work together to get the plants open whereas before, local officials were more inclined to recommend a plant close, full stop,” Little added.

All of this comes as the United Food and Commercial Workers International Union complains about working conditions in the age of coronavirus, which prompted governors and mayors to impose economic lockdowns to slow the spread of the virus. Reopenings must be coupled with a serious ramp-up in safety measures, according to UFCW International President Marc Perrone.

“America’s meatpacking workers must be protected. The reality is that these workers are putting their lives on the line every day to keep our country fed during this deadly outbreak,” Perrone said in an April 28 statement responding to Trump’s order. “For the sake of all our families, we must prioritize the safety and security of these workers.”

Other union officials are happy with how Tyson has responded. Bob Waters, president of UFCW Local 431, for instance, supports reopening the Tyson plant.

“Tyson has gone above and beyond to keep their employees safe,” Waters said in a May 6 press statement. “This pork plant and all of the measures they’ve put in place are an example of how to effectively set up a safe work environment for the employees.”

UFCW did not respond to the Daily Caller News Foundation’s repeated request for comment.

Kamala Harris exploits founding document to promote abortion — but omits key fundamental right
Obama Warns About the ‘Raw Sewage’ of Disinformation—Ignores Democrats’ Own Garbage
In Victory for Religious Freedom, Student Will Be Allowed to Wear ‘Jesus Loves Me’ Mask at School
Does Germany sending tanks to Ukraine mean the US is open to sending their own?
MSNBC’s Hayes: Conservative Censorship Claims ‘Never Made Much Sense’