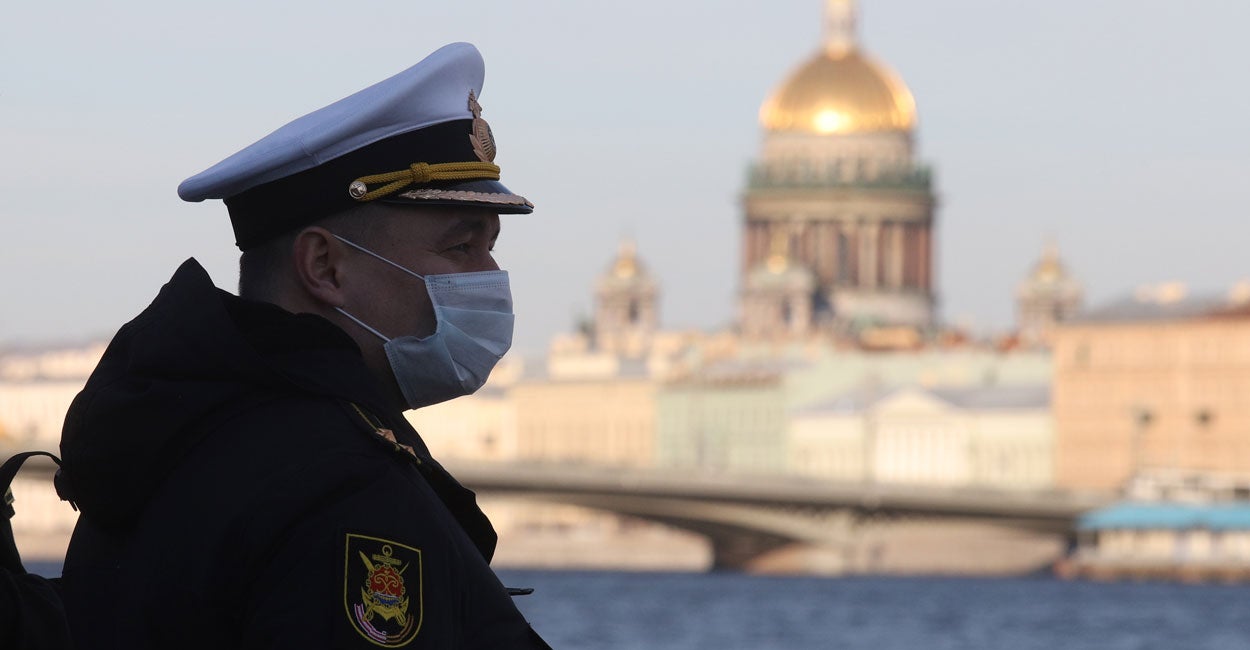 KYIV, Ukraine—As countries across Europe begin scaling back their
coronavirus lockdowns, a snapshot of Russian military activities underscores
that the Continent’s security problems before the pandemic haven’t gone away.

“On the contrary, it will offer new chances for
Russian meddling in Eastern Europe, as the U.S. and the EU will turn inward to
solve the post-COVID-19 economic and social problems,” Van Herpen told The
Daily Signal, referring to the disease caused by the novel coronavirus.

“We have had to face the grim
reality of a world upended by the coronavirus pandemic. The outbreak has
changed our lives, but the behavior of Russia-led forces in the Donbas has
remained largely the same,” James Gilmore, U.S.
ambassador to the Organization for Security and Cooperation in Europe, said
during an April 30 meeting in Vienna.

In April 2014, Russia carried out a hybrid
warfare invasion of the Donbas. Since
February 2015, a shaky cease-fire, known as Minsk II, has kept the war locked
along a relatively static, entrenched front line.

Combined Russian-separatist forces “continue to violate the
cease-fire with weapons that are impermissible under the Minsk agreements,
violating Ukraine’s sovereignty and territorial integrity, maiming and killing
civilians, and threatening critical infrastructure even during this global
crisis,” he said.

Despite the global pandemic, Russian warplanes continue to test
NATO’s air defenses in the skies above the Baltic Sea and the North Sea.

In order to protect the airspace
over its Baltic member states of Estonia, Latvia, and Lithuania—three ex-Soviet
countries—NATO maintains fighter jets on 24/7 alert, ready to scramble in case
of suspicious air activity.

This “Baltic Air Policing Mission” dates back to
2004. Yet, aerial encounters between Russian and NATO aircraft significantly
stepped up in 2014 as regional tensions flared in the wake of Russia’s
invasions of Ukraine that year.

The United States and the European Union levied punitive economic
sanctions on Moscow for its aggression in Ukraine. Subsequently, relations
between Russia and the West have hit a post-Cold War nadir.

Using cyberwarfare and weaponized propaganda, Russia has embarked
on a hybrid war blitz against Western democracies. Russia has also ratcheted up
its conventional military provocations against NATO forces across Eastern Europe.
Notably, Russian warplanes have made a habit of provocative flybys of NATO
ships and aircraft.

On April 29, air force detachments from Spain, France, and the
United Kingdom took over NATO’s Baltic air policing mission from Belgian and
Polish units. The incoming fighter jet units are scheduled for a four-month
deployment.

“This 24/7 mission demonstrates that our commitment to the
security of our allies is rock-solid and that our vital work goes on despite
the coronavirus pandemic,” said NATO spokesperson Oana Lungescu.

Ukrainian President Volodymyr Zelenskyy swept into office in 2019
on a perceived mandate to end the war. To that end, the Ukrainian leader has
made several bold peace overtures to Moscow to jump-start peace talks.

Among those gambits, Zelenskyy has authorized the unilateral
withdrawal of Ukrainian forces from some front-line positions. He also agreed
in principle to hold elections in the Donbas—a long-standing Russian
requirement to resume negotiations.

Zelenskyy’s efforts to break the war’s stalemate spurred peaceful
protests across Ukraine and a nationwide “anti-capitulation” movement. War
veterans, in particular, have been outspoken in their opposition to Zelenskyy’s
peace plans, demanding that he not hold elections in the Donbas until all
Russian troops have left the contested territory.

If elections are held before Ukraine has full
control of the Donbas, Zelenskyy’s critics contend, then Russia can influence
the vote in support of its preferred candidates, giving the Kremlin virtual
voting rights in Ukraine’s national legislature.

Prior to the pandemic, Zelenskyy had made some progress in
negotiations with Moscow. Notably, the Ukrainian president met with Russian
President Vladimir Putin for peace talks in Paris on Dec. 9.

However, the revamped peace talks have since largely stalled as
both Kyiv and Moscow focus on the domestic economic exigencies of the
coronavirus pandemic. Also, some say that Putin has opted to exploit the
coronavirus pandemic for geopolitical gain, rather than make compromises with
Zelenskyy for the sake of peace in the Donbas.

“Putin uses the coronavirus crisis to advance his
pawns on the international chessboard,” Van Herpen said. “He has already asked
the West to end the sanctions—without any effort from his side.”

The view from both Washington and Kyiv is that Russia is
responsible for the ongoing bloodshed in the Donbas.

“The full and comprehensive implementation of the
cease-fire that the Normandy leaders agreed to at the Dec. 9 summit clearly has
not materialized,” said Gilmore, the U.S. ambassador to the OSCE.

“As always, it is civilians who pay the greatest
price for Russia’s aggression in the Donbas,” Gilmore added.

Moscow, for its part, says Kyiv has failed to
implement its end of the Dec. 9 deal by not adopting constitutional changes to
grant Russia’s proxy territories “special status” within Ukraine.

“We pointed out that one of the key
provisions of the Minsk agreements concerns ensuring the special status of the
Donbas as part of Ukraine. This is the goal and basis of efforts to resolve the
conflict,” Russian Foreign Minister Sergey Lavrov told journalists in
Moscow last week, the Russian news agency TASS reported.

The Course of History

The trench war stalemate in eastern Ukraine has developed into a
volatile standoff, in which Europe’s two-largest standing land armies, in terms
of manpower, exchange daily fire. The conflict is always prone to escalation,
and it remains a threat to regional peace.

Ukraine has about 40,000 military personnel, supported by heavy
artillery and armor, forward deployed to the Donbas. Those forces comprise some
10 army brigades in addition to air defense units, aviation units, and support
personnel.

Ukraine’s strategic military doctrine identifies Russia as the
country’s top security threat. Kyiv is rebuilding its military with the
specific objective of defending against a Russian invasion.

To that end, Ukraine fields 250,000 active-duty soldiers—second
only to Russia in manpower among European militaries.

Due to the Russian threat, NATO has rearmed and reinforced its
eastern flank with rotating military forces. The Western alliance also has
stepped up the pace of its military exercises to match that of the Cold War
era.

Altogether, Eastern Europe since 2014 has become the most rapidly
militarizing region on earth, as measured by annual defense spending increases.
In short, the overall military balance of power in Europe has shifted radically
in six years.

And, for now, it looks like the coronavirus pandemic won’t alter
the current course of history.

“In the post-COVID19 world, the
importance of deterring Russia in Europe will remain high for the U.S.,” said
Marcin Terlikowski, head of the International Security Program at the Polish
Institute of International Affairs. “So the importance of maintaining a good
transatlantic relationship will stay an important political goal for Europe.”

‘Black people can harbor anti-Black sentiments’: CNN commentator argues former officers charged in Tyre Nichols’ death could have been influenced by racism
Biden to Send Ukraine ANOTHER $2.2 Billion in Military Aid – Including Long-Range Missiles: Reuters
The Threat of Woke Corporations and the Response of the Red States
Woke makeup brand shares photo of what appears to be a bearded man wearing bright pink lip cream
Zero protesters show up at Jordan Peterson event that activists warned was ‘racist’ and ‘homophobic,’ demanding its cancellation