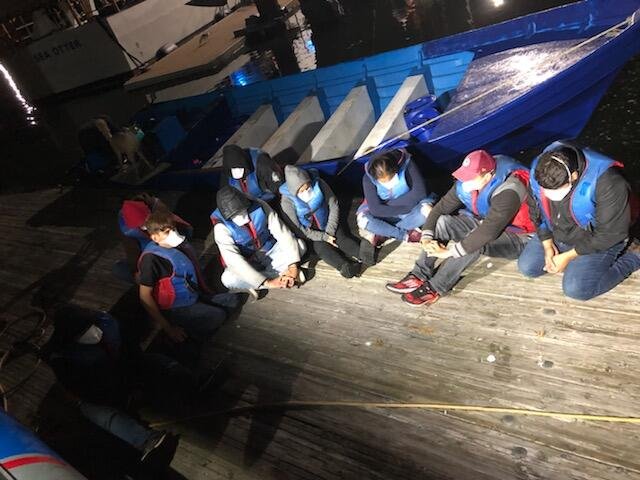 SAN DIEGO — U.S. Customs and Border Protection Air and Marine agents stopped two boats off the coast of San Diego early Thursday morning with 18 people attempting to illegally enter the U.S.  For one of the boats, agents had to disable the engine before the vessel was stopped less than a mile from the beaches in Coronado.

On the evening of Wednesday, May 6, CBP agents in a multi-role enforcement aircraft spotted a boat that crossed into U.S. territorial waters from Mexico.  The agents in the aircraft tracked the boat and directed the crew of a CBP coastal intercept vessel to its location.  Just after midnight, when CBP marine interdiction agents turned on their lights and sirens on their vessel, the boat came to a stop about eight nautical miles west of Point Loma; agents counted 10 individuals on board.

Shortly after identifying the first boat, the CBP agents in the aircraft again spotted another boat that crossed into U.S. territorial waters from Mexico.  The agents tracked the second boat and directed the crew of a second CBP intercept vessel to where the boat was heading.  Again, marine interdiction agents signaled the boat to stop; however, in this instance, the boat instead failed to stop when directed and fled.

CBP Air and Marine Operations alerted partners within the San Diego Regional Coordinating Mechanism (ReCoM) to prepare for a possible vessel landing along the coastline, and law enforcement partners deployed.

Ultimately, CBP marine interdiction agents pursued the boat, stopping it safely at sea by using special tactical training to fire on, and disable, the boat’s engine.  The pursuit ended about one-quarter nautical mile offshore from Coronado.  Agents counted eight individuals on board.

“These smugglers have no regard for the safety of their passengers or others on the water.  They routinely operate overloaded vessels without required navigational lights and operate within unpredictable and dangerous surf-zones,” said Chris Hunter, Deputy Director of the San Diego Air and Marine Branch, Marine Operations.  “The safest outcome is for our agents to stop the boat at sea, before they attempt a beach landing.  Illegal beach landings are dangerous to everyone on board in the best of circumstances. I’m glad both of these incidents ended with everyone brought safely to shore.”

In both cases, CBP marine interdiction agents brought the boats with their occupants to the dock in San Diego, where they turned the individuals over to U.S. Border Patrol agents for processing.  From the first boat, agents identified: seven men, ages 23-38; two women, ages 29 and 39; and a teenage boy, age 17.  From the second boat, U.S. Border Patrol agents identified: six men, ages 23-38, and two women, both age 29.  Agents determined that all 18 were Mexican nationals with no legal ability to enter the U.S., and they were immediately expelled back to Mexico under Title 42 authority.

AMO agents processed both vessels for seizure and forfeiture: a 25-foot panga and a 17-foot, open-hull pleasure craft.

Spot the Sussexes: Harry and Meghan at Ellen DeGeneres’s surprise wedding vow renewal
In Your Face: Xi Sends Giant Spy Balloon Over US Days Before Blinken Trip to Beijing
Tax Dollars Are Wasted Building Electric Vehicle Charging Stations in Cold Climates
Big Pharma Is Hoarding Over $1 Billion In Payments For Cancelled Vax Doses
Travel companies are ‘greenwashing’ — here are 3 ways to find ones that aren’t