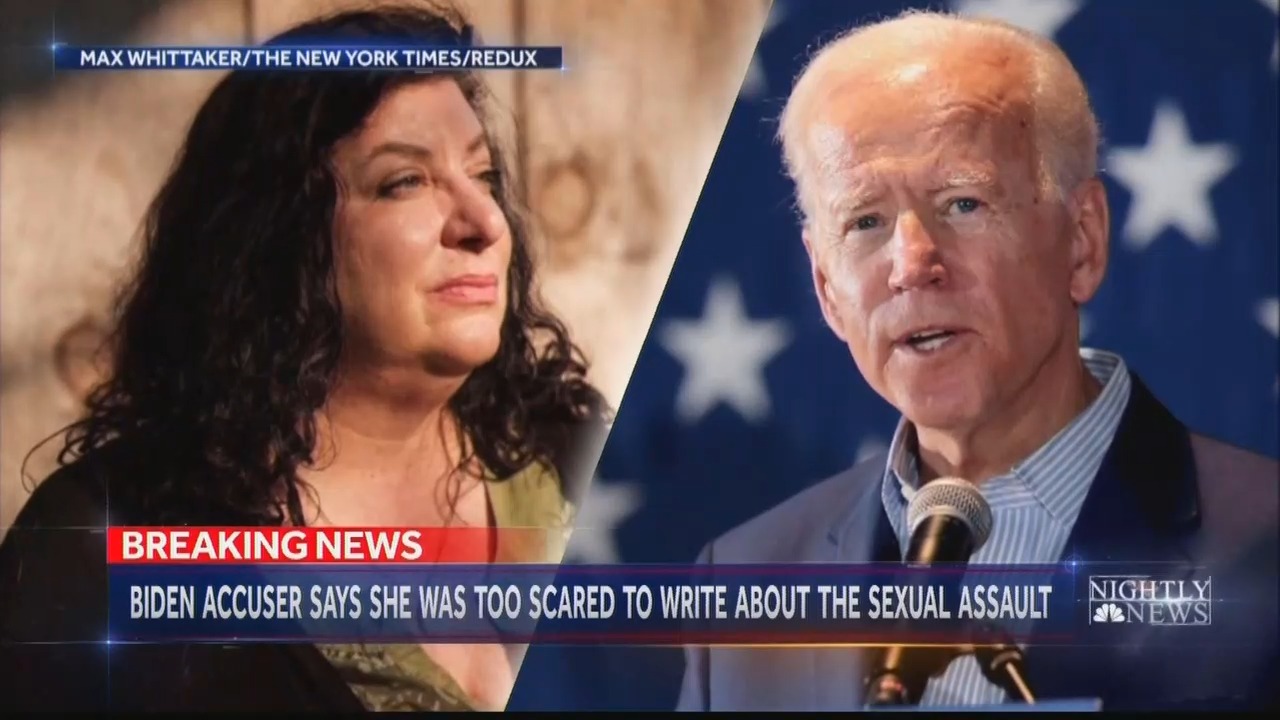 It was a small moment, but still a surprising one. A note of reality seeped into NBC’s Sunday night coverage of the Joe Biden sexual assault claim. On the NBC Nightly News, reporter Ali Vitali showcased claims of hypocrisy in the Tara Reade case. She noted, “Conservatives point out the response to Reade stands in stark contrast to the way Democrats and Biden rallied around Supreme Court nominee Brett Kavanaugh’s accuser Christine Blasey Ford.”

She then quoted Carrie Severino of the conservative Judicial Crisis Network: “There should be a presumption of innocence. However, you can’t apply it only to people you agree with politically. That’s a problem.”

Vitali added, “During the Kavanaugh hearing, Biden said Dr. Ford should be given the benefit of the doubt”

Will the media continue to cover the unfolding Reade allegations? On Monday, only NBC’s Today offered a story, allowing three minutes and three seconds. NBC’s Andrea Mitchell showcased Michigan Governor Gretchen Whitmer defending Biden: “Michigan’s governor, one of Biden’s possible choices for a running mate, strongly defended him on CNN.” Mitchell then quoted Whitmer: “I don’t believe it’s consistent with the Joe Biden I know and I do believe Joe Biden.”

ABC’s Good Morning America and CBS This Morning, despite a combined four hours of available air time, skipped the story on Monday morning.

A transcript of the Nightly News segment is below:

KATE SNOW: We have new developments tonight concerning an allegation made against a apparent Democratic nominee Joe Biden. His accuser talking about what she did and did not report when she says the incident occurred.

ALI VITALI: Former Senate staffer Tara Reade, who alleges that Joe Biden sexually assaulted her when he was a senator, reiterating to NBC News this weekend she never used the word sexual assault in a complaint Reade says she filed in 1993. Biden has flatly denied her allegations.

VITALI: Reade cancelled an interview with Fox News, Sunday, citing threats against her and family. She told NBC in a text message she’s not sure what explicit words she might have used in the 27-year-old complaint she says was filed. Reade says it was regarding harassment she experienced, not the alleged sexual assault. She also told the Associated Press she was quote “too scared” to write about the sexual assault. Biden has asked for those documents to be released.

BIDEN: If that document exists, it would be stored in the National Archives.

VITALI: There is mounting pressure for Biden to open his sealed documents store at the University of Delaware.

DNC CHAIR TOM PEREZ: This is like the Hillary e-mails. Because there was nothing there.

CARRIE SEVERINO (Judicial Crisis Network): There should be a presumption of innocence. However, you can’t apply it only to people you agree with politically. That’s a problem.

VITALI: During the Kavanugh hearing, Biden said Dr. Ford should be given the benefit of the doubt. Ali Vitali NBC News, Washington.

Democrats’ Budget Agreement Would Burn the Economy
The View’s Sunny Hostin Spews Lies and Hate About Sean Hannity
Federal Judge Blocks Arkansas Abortion Law, Calls It ‘Imminent Threat’ To Women
Trump Labels McConnell ‘a Stupid Person’ for Refusing to Eliminate Filibuster
Chinese government says NBC ‘hurt the dignity and emotions of the Chinese people’ by failing to include Taiwan in its map of China during Olympics coverage