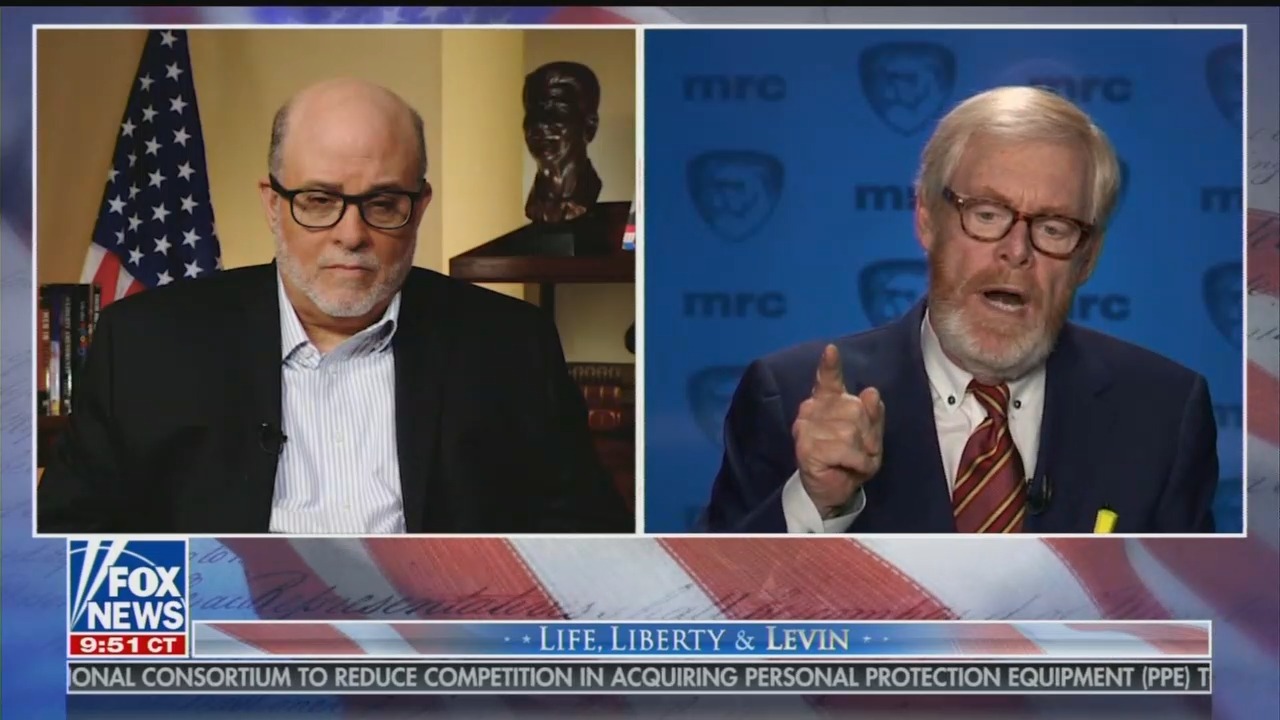 Appearing on Sunday’s, Life, Liberty & Levin, Media Research Center President Brent Bozell blasted a hypocritical media for ignoring and downplaying the sexual assault allegations against Joe Biden. Talking to Fox’s Mark Levin, Bozell described the MRC’s unearthing of a clip of Tara Reade’s mom calling into Larry King Live in 1993. Talking about CNN, he explained, “They were embarrassed last week with the video that they had, we released it. They had it all along.”

For more on the media’s censoring of the Reade sexual assault story, see this MRC study.

A partial transcript of the Life, Liberty and Levin segment is below. Click “expand” to read more.

MARK LEVIN: Your organization which is really very, very important. You’re the watchdog in the media, and the media is supposed to be a watchdog for us. And you created your organization to be a watchdog in the media. I take it because you figured decades ago that the media was not really a free press at all. It was more driven by ideology. And you’ve been demonstrated to be right time and time again, you have these political reporters, as I said to Joe Concha earlier, who haven’t missed a beat with Russia. They tried to turn that against the President.

LEVIN: Brent Bozell, Media Research Center, you’ve been monitoring the coverage of the media and of the President throughout this crisis. What have you found?

BOZELL: Well, it’s a continuation of their treatment of him ever since he came down that escalator in in May of 2015, except it’s actually at a time of national crisis. It’s actually gotten worse. The Washington Post last weekend came out with this piece on the President where they did an analysis of his coverage of his performance during this COVID crisis. so, we thought, well, why don’t we do an analysis of The Washington Post coverage of it? We looked at the every story since January 17th, looked at every story where the media had an opinion in the headline — where The Washington Post had an opinion in the headline about the job the President’s administration was doing. We found two headlines that were positive, and by the way, neither one of them about the President. Fifty three that were negative about the President. Let me just read you, if I can, Mark, just some of the headlines in “The Washington Post and then you tell me if this is journalism. “A Confused Effort To Show Calm,” “Messaging Undermines U.S. Efforts on Virus.” “Trump’s Error-Filled Speech Rattled Rather Than Reassured.” “Governors Led as President Minimize Pandemic.”

I can go on and on. Those were the quote-unquote “impartial objective headlines” on The Washington Post that then turned around to do an analysis of Donald Trump. That’s not the only one. I love — one of my favorites is, Mark, all of those news reports about how Donald Trump was late to the game in talking about this COVID crisis. We did a — we did a video which is on newsbusters.org, shameless promotion there, which looks at the nonstop reportage coming in January and February from the media themselves dismissing COVID as not being important. You heard me right. While they’re saying the President wasn’t paying attention, they were, and how about this statistic. Between January 17th, when the story broke and March 3rd, a two-week period. This is when the CNN was doing story after story. I mean, they have been doing it recently about how the President was asleep at the switch. When the story broke in January 17th to March 3rd, guess what percent of stories on CNN dealt with the COVID crisis? Answer — 1.6 percent of the stories. What were they doing? Impeachment, impeachment, impeachment, impeachment. So, how dare they now come back and say the President wasn’t covering? They were the ones not covering it.

LEVIN: And Brent Bozell, they’ve also said two other things. We’re not covering it anymore because it’s political. And also that we’re not covering it anymore because he is giving a bad health advice and it could make the people sick. I have never seen a more rotten and corrupt media in my life. You know, I wrote the book, Unfreedom of the Press. I don’t think throughout American history, at least when there was yellow journalism, you knew it was yellow journalism. At least when they were a party press out there, they admitted it. We are with the Democrats. We are with the Republicans. We are with the Whigs. We are with whatever.

BOZELL: I’m talking about talking about Joe Biden, and the fact that Tara Reade, a staffer of his, a month ago laid out a sexual assault charge against him, which we can’t — we’re not going to discuss it. It is so awful. But there it is. Then we showed the video evidence of in 1993, her mother calling into The Larry King Show, corroborating — 1993, twenty-six years ago corroborating what Tara Reade is saying.

BOZELL: I’m not saying that Joe Biden is guilty. I’m not saying — he has never been indicted. But in 26 years, when he was senator, they made no effort to investigate this and she was asking for an investigation. And when he became Vice President for eight years, no investigation. And now he is the presumptive President of the United States or nominee for the presidency of the United States, and still no investigation. So when they were embarrassed last week with the video that they had, we released it. They had it all along. They did one story and they walked away from it. Think about Brett Kavanaugh. Think about the accusations against him and the fact that there wasn’t a single corroborating witness, including the ones she put forward. And yet everyone dropped their coverage to look at it, and now you have the evidence where a next door neighbor of Tara Reade has now come forward, and she said, yes, Tara Reade told me that story 26 years ago. So, you’ve got an accusation of sexual assault. You’ve got two corroborating witnesses, and it’s about the man who would be President of the United States and they’re just looking the other way.

LEVIN: And let’s be clear about this. He’s accused of what the Criminal Code would call rape. He is accused of rape, not adultery, not that — rape. That is a big deal crime and notice Gillibrand and Harris and Abrams. Notice all of the women who were talking about Kavanaugh, absolute hypocrite, absolutely outrageous how they conduct themselves here. They don’t even want to know what’s going on here.