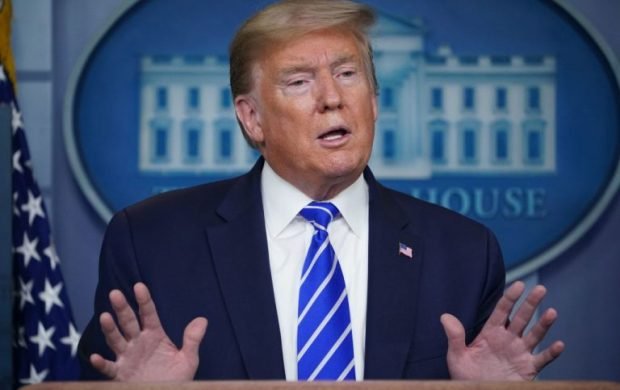 Last week, Trump had a scientist Bill Bryan undersecretary of Science and Technology at Department of Homeland Security explain how isopropyl alcohol and bleach appear to kill viruses on surfaces. Well, that’s all the leftist and destroy Trump fake news media had to hear and they went off into their biased hate-filled rage tantrum of attacks on Trump.

The activists falsely claimed that Trump “urged Americans to inject themselves with disinfectant” and “told people to drink bleach.” He never said anything of the kind. To understand Trump’s remarks, it’s important to first understand the full context of what was said at the press briefing.

Following remarks on Thursday by Bill Bryan, Under Secretary for Science and Technology at the Department of Homeland Security, pertaining to the ways in which sunlight, isopropyl alcohol, and bleach appear to kill the virus on surfaces, the president approached the podium, looked over at Bryan, and said:

“So, I’m going to ask Bill a question that probably some of you are thinking of if you’re totally into that world, which I find to be very interesting. So, supposing when we hit the body with a tremendous, whether it’s ultraviolet or just very powerful light, and I think you said that hasn’t been checked, but you’re going to test it. And then I said, supposing you brought the light inside the body, which you can do either through the skin or in some other way, and I think you said you’re going to test that, too.  Sounds interesting.

And then I see the disinfectant, where it knocks it out in a minute, one minute. And is there a way we can do something like that by injection inside or almost a cleaning? Because you see it gets in the lungs and it does a tremendous number on the lungs, so it’d be interesting to check that, so that – you’re going to have to use medical doctors with – but it sounds interesting to me. So, we’ll see, but the whole concept of the light, the way it kills it in one minute. That’s pretty powerful.”

Some in the media suggested that the president’s remarks could create a dangerous situation. Anderson Cooper on CNN spent an entire hour saying Trump told people to inject Lysol into their veins and that Trump wants to kill people. Cooper said Dr. Brix was horrified at Trump’s remarks and hung her head and was disgusted.

Nothing could have been further from the truth. In fact, what Trump was alluding to is done today – injecting light into the body and lungs to cure various diseases – but these hate-filled reporters do not do any research and their hate and rage for all things Trump overtakes any honest reporting and research.

I recently received a comment from a respiratory therapist I am reproducing here explaining what Trump said is true. I report you to decide:

“I watched the clip about the “disinfectant that Trump talking about.” People need to listen closely….and before I say this, I will tell you that I am not registered to vote and I don’t vote. I am neutral. He is basically brainstorming for an idea to help the lungs. He stated that the disinfectant kills the virus in one minute, so he proposed the question can we inject disinfectant (not Lysol), he used the word “disinfectant” …in the lungs, but that is for the doctors to figure out. Now a layperson like Trump will say disinfectant and a medical person would say “medicine.” Medicine dumped into the lungs happens all the time! I personally have dumped respiratory medicine down an Endotracheal tube directly into the lungs. When babies are born prematurely, guess what? Yes we “inject” the lungs with a medicine called surfactant that helps keep the alveoli open to oxygenate the lungs. Antibiotics are sometimes injected into infected parts of the lungs through a chest tube. So what I want the general public to know, is that we do “inject” medicine into people’s lungs, that yes act like a disinfectant (antibiotics), so why is everyone in an uproar over this? If you are a layperson and don’t understand what he said then ask a medical person. His statement was so twisted around and misinterpreted, and this is coming from a Respiratory Therapist that has injected medicine in people’s lungs. Lysol brand has perpetrated misinformation and panicked the general public who doesn’t know anything about lungs. And Trump never used the word “Lysol”. So why did Lysol brand think he was talking about them, that’s narcissistic on their part. Why would the Lysol brand embrace that? They look ignorant. So people, yes we do inject medicine into the lungs.”

I think Lysol was just looking out for people who might actually do that thinking that Lysol will kill the virus – like that couple who used the fish tank cleaner thinking the ingredient in it was hydroxychloroquine that sounded like that when it wasn’t and the husband died after taking it.

Speaker of the House Nancy Pelosi (D-CA) even claimed during a press conference on Friday that Trump was “asking people to inject Lysol into their lungs.”

The president later claimed that he was being sarcastic, telling reporters on Friday:

“I was asking a question sarcastically to reporters like you just to see what would happen … I was asking a very sarcastic question to the reporters in the room about disinfectant on the inside – but it does kill it and it would kill it on the hands and that would make things much better. That was done in the form of a sarcastic question to the reporters. Also, this was Trump’s way of putting them on and exposing how fake the media is and they fell for it. He’s always three steps ahead of them.

The journalists’ lunacy just tells me they are running out of ways to distract from the issue at hand.  Namely, curing Americans of the pandemic, getting them safely back to work, and holding China responsible for what they did. They are focusing in on twisting Trump’s words about Lysol or whatever is just so lame. The media distorted the comment, spun it to meet their narrative and ran with it…now all the “useful idiots” are picking it up to bludgeon the President…a familiar strategy that America has been watching for the past 3 and half years…it is getting old. There are major issues to work on, not this BS!

Trump spoke at length about the effects of light and disinfectants that were previously mentioned.

“But I’d like them now to look as it pertains to the human body. Not just sitting on a railing or sitting on a wall. I’d like them to look as it pertains because maybe there’s something there,” the president said. “I’m not a doctor. They have to work with the doctors, but maybe there is something to light, and the human body, and helping people that are dying.”

Jeff Mason of Reuters later asked Trump: “But just to clarify that, sir, you’re not encouraging Americans to inject disinfectant?”

The president replied: “No, of course not. Interior wise, it was said sarcastically. It was put in the form of a question to a group of extraordinarily hostile people, namely the fake news media.”

During the segment, Birx was asked about President Trump’s remarks on Thursday regarding the potential use of light and disinfectants as a means to treat COVID-19.

Watters asked: “We heard from DHS, one of the scientists on Thursday, say that sunlight, increased temperature, and humidity could have an effect on killing the virus in the air, on surfaces, and the president’s spitballing and he’s asking questions – would it be possible to maybe target the virus through a cure using certain ingredients or using sunlight. You didn’t believe the president was putting anybody in danger, did you?”

Birx replied: “No, [when] he gets new information, he likes to talk that through out loud, and really have that dialogue. And so that’s what dialogue he was having. I think he just saw the information at the time immediately before the press conference, and he was still digesting that information.

The president has always put health and safety first. I think you can see that in the way that he was supportive of slowing the spread guidelines, knew the impact that that would have on the economy, and knew clearly what impact it would have on the economy. Yet he realized that the health and safety of Americans was his number one interest and responsibility, and that’s what he did first and continues to do as we begin to open up.”

In after-hours trading, Aytu (NASDAQ: AYTU) jumped more than 8 percent in value, even as mainstream media derided the president’s musings that UV light could be used in the treatment of COVID-19.

At Cedars-Sinai in Los Angeles, Dr. Mark Pimentel and his team developed a specific technology for filtering out the dangerous component of UV light, while maintaining the rays’ effect of killing bacteria and viruses.

On Monday, AYTU announced the signing of an exclusive global license with Cedars-Sinai for this potential coronavirus treatment.

At Cedars-Sinai in Los Angeles, Dr. Mark Pimentel and his team developed a specific technology for filtering out the dangerous component of UV light, while maintaining the rays’ effect of killing bacteria and viruses.

On Monday, AYTU announced the signing of an exclusive global license with Cedars-Sinai for this potential coronavirus treatment..

By the way UV light has been used internally for many diseases. Ultraviolet blood irradiation (UBI) was extensively used in the 1940s and 1950s to treat many diseases including septicemia, pneumonia, tuberculosis, arthritis, asthma and even poliomyelitis. The early studies were carried out by several physicians in USA and published in the American Journal of Surgery. However with the development of antibiotics, UBI use declined and it has now been called “the cure that time forgot”.

So if the media WANTED TO HELP the public with the COVID-19, instead of attacking Trump with their ridiculous BS, they actually had a story here..And it might actually save some lives,but they are so stuck on Partisan Politics BS that they are in fact missing out on some incredible stories.

If I can find it and write about it here so can they. Do we seriously have to tell the media how to do their jobs? They flunked journalism 101 in the way they now report. They can’t be objective when filled with so much hate and rage and can’t see the forest for the trees right in front of them. They are playing checkers while Trump is playing 3D chess.